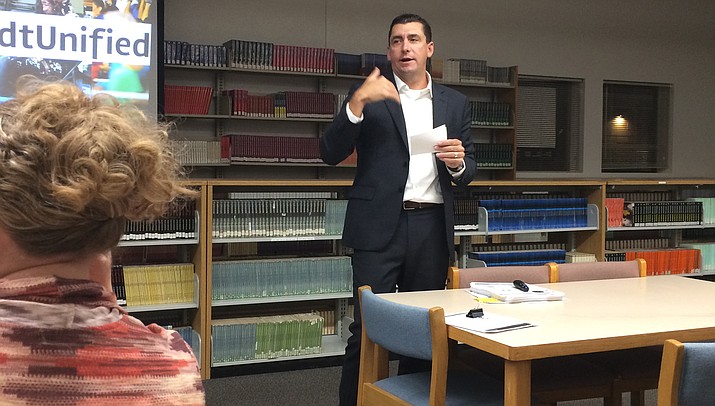 Dan Streeter, Superintendent of the Humboldt Unified School District, offers an overview of HUSD programs with both highlights and challenges during a "Community Conversation with the Superintendent" Thursday Nov. 21 at Bradshaw Mountain High School in Prescott Valley.(Nanci Hutson/Courier)

Humboldt Unified School District Superintendent Dan Streeter is like a proud father, preening with pride over the multitude of accomplishments and innovations in Yavapai County’s largest district.

He has the utmost faith that the 5,700 students entrusted to the district’s 10 schools — pre-school to high school — are getting a “world-class education” despite financial realities that place HUSD at the bottom of Arizona districts when it comes to dollars per student each year.

In a state that is at the bottom of the nation in state funding, Humboldt is in the fifth percentile, Streeter said with a grimace.

“It’s 100 percent money,” Streeter told an audience of about 50 educators, parents and community leaders at the “Community Conversations with the Superintendent” on Thursday, Nov. 21 at Bradshaw Mountain High School in Prescott Valley. 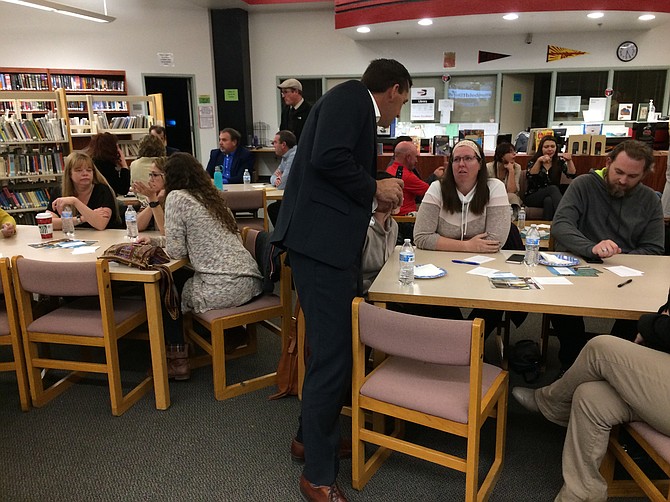 Humboldt Unified School District Superintendent Dan Streeter speaks to educators as they craft questions for him to answer after his formal presentation about successes and challenges in HUSD at a “Community Conversation with the Superintendent” on Thursday, Nov. 21 at Bradshaw Mountain High School in Prescott Valley. (Nanci Hutson/Courier)

Organized through the Northern Arizona PTA Council and Humboldt Education Association, the five-year superintendent has been hosting these public conversations for the last four years. In the last month, he has participated in three such events, including one translated into Spanish.

Humboldt’s test scores and recent A-F labels are proof the district is getting it done when it comes to meeting academic standards and helping students progress and become proficient beyond expectations, Streeter said. Humboldt saw great strides in most of its schools this year, and even the ones that did not earn the highest scores are on the right path, he said.

Though like other area education leaders, Streeter is not a fan of the state assessment or labeling system, and would like to see it revised to better reflect what goes on schools across the state, he said he is confident HUSD is making strides every day such that students are poised for the world beyond high school.

HUSD has a high number of students eligible for income-based free and reduced lunches, as well as those designated for special education or who do not yet speak English fluently. Still, Streeter said district educators are devoted to helping them grow and become proficient beyond state predictions for success.

HUSD is also on the cusp with 21st century, personalized instruction opportunities, and offers the most advanced placement courses of any high school in the area, he told the audience.

“Our state doesn’t fund education well, but our kids still have dreams and aspirations, and that is our inspiration,” said Streeter whose wife, Emily, is a middle school teacher in the district, and their two sons, Colin and Cade, are Bradshaw Mountain High School students. “And we accept all students who walk through our doors.”

In the question-and- answer period, Streeter was quizzed about how the district plans to respond to some of the growing needs for intervention with students, including those with excessive absences. Again, he didn’t dodge.

At this time, the district is unable to afford social workers and behavior coaches able to work with students and families in every school on such issues.

The district has applied for money from the state’s $20 million safety grant program. But Streeter was candid that there is a lot of competition for those dollars, so he is not optimistic any of those dollars will come to the district.

The district, too, would like to offer more special education integration opportunities, but again that requires additional resources.

How does that get done?

The district has received some additional dollars from the state’s program of results-based funding, and even though it is a program Streeter finds objectionable he said he is not about to reject dollars to benefit students. Each HUSD school is also adopted by a church and nonprofit organization that often provide extra dollars for various programs.

The community may also opt to eventually approve a bond and override initiative.

The community rejected a $15 million bond effort in 2018, but based on needs the Governing Board may at some point opt to try for another, Streeter said.

Then there is always the hope Arizona voters will elect more pro-education lawmakers.

In the meantime, Streeter said he and district leaders refuse to be daunted by the challenges.

“We are full steam ahead,” Streeter declared. “We will be the premier school district in northern Arizona … It’s about being Humboldt Unified.”