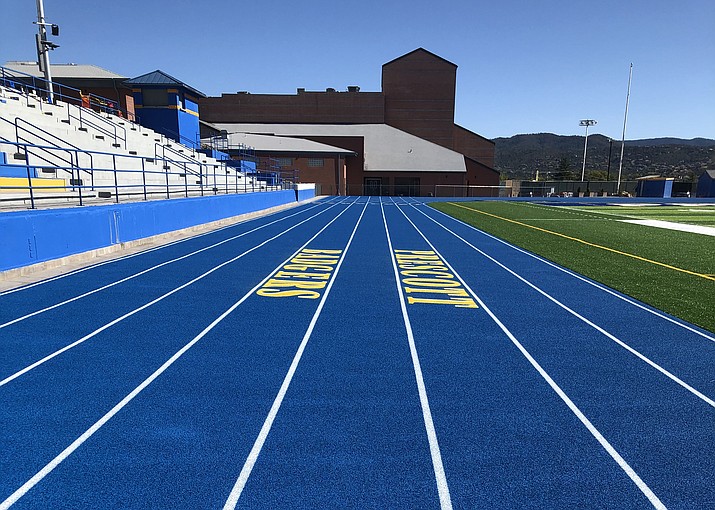 A photo of the finished track surrounding Bill Shepard Field on the campus of Prescott High School. The $2.5 million project is complete and has become a win-win for the community. (PHS/Courtesy)

Now complete, the $2.5 million renovation of Prescott High School’s football field and surrounding track has become a win-win for the surrounding community.

For one, and perhaps the biggest win, the Prescott Unified School District will no longer have to pay an estimated $30,000 per year in water costs to keep the natural grass growing and looking good at Bill Shepard Field.

Add that to the thousands of dollars spent every year on upkeep, such as mowing the grass, lining it for football and soccer games, and general maintenance, that money saved can be saved for future field maintenance and other projects.

It almost pays for itself.

And because the facility is available to rent, organizations actually running local community events may now pay to use the facilities at PHS.

“No one was going to rent our field in the condition that it was, and now that’s changed. It’s a huge deal,” PUSD Chief Financial Officer Brian Moore told the Courier last week.

Not only has the safety improved for young athletes training for Badger and other community sports with an even turf field and track, but fans are now safer as well thanks to the $26,000 spent on railings for the bleachers.

With all-metal bleachers that were decades old as the main seating option for fans, a slippery surface was certainly an issue, and likely deterred at least some people from enjoying a local game.

The new LED stadium lighting system ($393,750) will allow for ultimate visibility at night, another bonus not only for sports teams competing, but local vendors for events that are meant for evening enjoyment.

As for the track, which cost about $952,000, the McIntyre family donated an additional $400,000 to help with costs. The family, which the track is named after, originally helped fund the school’s former track installation in the 1990s.

The new track now makes it possible for the school to host high school track events, which weren’t possible in the past. This means hundreds of track athletes and their families will be coming to town. Many may stay in our local hotels, eat in our local restaurant and shop in our local grocery stores.

That influx of dollars can only be good for our local economy.

Finally, one of the best parts of PUSD’s plan to renovate this facility was being able to pay 100% of the bill for the artificial turf field, estimated at a little over $1,120,000, with money left from district land sales. The LED lighting system and railings were also primarily funded using this money.

Make no mistake, the newly renovated PHS track and field is not only an investment today, but for the future, and the district can now make taxpayer and bond dollars go even further than before.