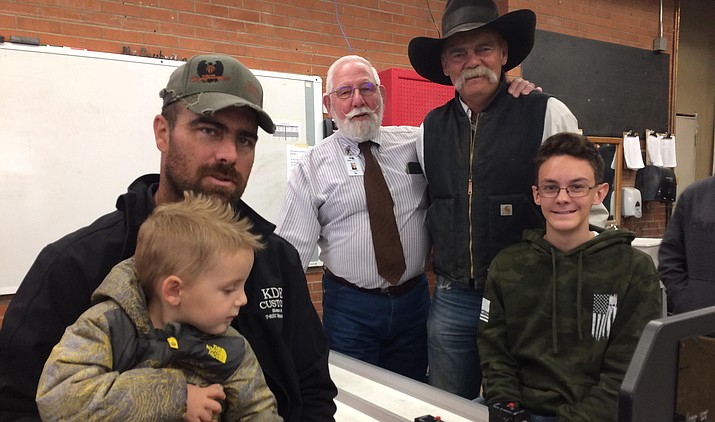 For 25 years, Don Eckel has treasured the carbon dioxide-pellet fueled, miniature wooden race car he built when he was a student at the then-Granite Mountain Middle School in Prescott.

On Wednesday morning, Eckel visited his son’s classroom to race their cars against one another. Eckel arrived with his family, including his father, Wade Eckel, who joined to watch the competition.

The invitation was extended by Terry Pemberton, the longest-serving Prescott Unified School District teacher, who counts himself privileged in the course of his 49 years to have taught grandfather, father and son in two different schools — Granite Mountain and Mile High.

Granite Mountain is now a fifth-sixth grade school and Mile High is for seventh and eighth graders.

Wade Eckel couldn’t resist a chuckle when asked about finding the industrial arts/applied technology teacher still in the same classroom — the very same wood and metal shop where he once learned precision welding and wood crafts.

“I can’t believe he’s still alive, never mind still teaching,” Wade said with a guffaw of the 71-year-old with the trademark handlebar mustache who was a novice industrial arts teacher when the eldest Eckel was a student. “He’s a good guy, I’ll tell you that. He’s one of the few I knew was a TEACHER.” 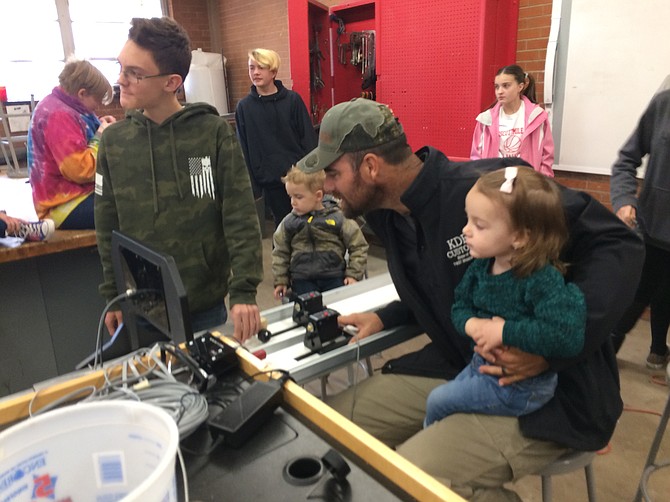 Father and son, Don Eckel and Brayden Carter, watch as their handcrafted race cars get ready to speed down the track in Terry Pemberton’s industrial arts class. Eckel was a student in Pemberton’s class 25 years ago; his son is in the second year of his class and Eckel’s father, Wade, was in his class when he started teaching 49 years ago.

Pemberton took the ribbing in good humor. Truth be told, he said, he has several triple-generation families in his 2019-2020 classes.

“That’s when you know you’re a geezer,” said Pemberton who chuckled as Don Eckel and his son prepared to race their mini-dragsters on a track set up in the industrial arts workshop. “It’s cool.”

In this race, surrounded by Pemberton’s mixed seventh- and eighth-grade industrial arts class, father and son were pumped to see who might emerge the winner. Timed to the second, the two broke even on their two races. Brayden’s best time was .666 of a second.

So how do these little race cars get such speed?

In the rear of the tiny toy car is a drilled hole just large enough for a small pellet-like canister of carbon dioxide, Brayden explained of these handcrafted creations that are similar to Boy Scouts’ Pinewood Derby cars with propulsion.

When the cars are placed at the starting line on the track, the canisters are inserted and with one quick puff the cars go hurdling down the track at a rate so fast they are a blur to observers.

Brayden and his Dad were cheered by his classmates as their cars zipped down the track.

Don Eckel was in the first class Pemberton taught how to build these cars. The nine-week lesson was such a success — students must create sketches that are turned into working drawings prior to the actual craftsmanship —Pemberton said he opted to repeat it year after year.

A stickler for doing things right, Pemberton admitted some of his students may tire of having to repeat certain steps, or ponder why measurements have to be so exact, but he delights in the pride they have when their car is finished and ready for the track. Like Eckel, Pemberton said, many students count their cars as a special educational keepsake.

“His class was always the one I looked forward to every day,” Eckel said.