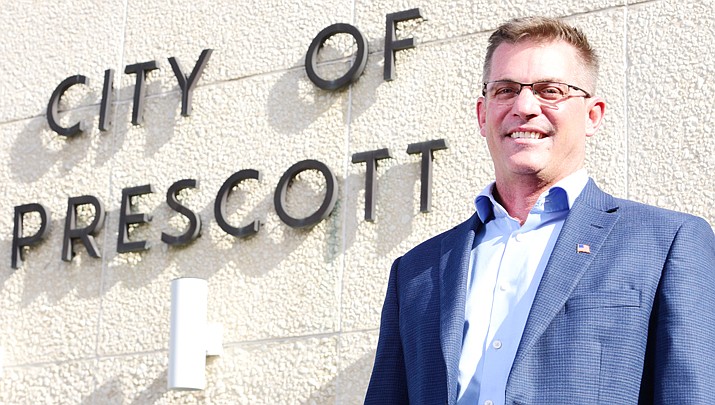 Prescott Mayor Greg Mengarelli and two other men were allegedly assaulted by a 73-year-old Prescott man Tuesday evening, Nov. 19, according to the Prescott Police Department (PPD).

Officers responded to a private event at an art gallery in the 700 block of West Gurley Street at about 6:30 p.m. The gathering was hosted by Tom and Cathey Rusing shortly after the mayor and several other members of the Prescott City Council were sworn into office, according to a police report.

The man who was injured suffered what appeared to be “abrasions to the face,” said PPD spokesperson Jon Brambila. Emergency responders offered the injured man medical assistance, but he refused.

“There was nothing life threatening or significant about the injuries,” Brambila said.

Neither of those victims’ names have been released by authorities and the police report for the knife attack was unavailable at press time. The suspect was identified as a 73-year-old Prescott man, but he has not been arrested or charged for this incident.

Brambila said the two victims are currently choosing not to press charges against the suspect.

Cathey Rusing, one of the council members who was sworn in Tuesday, refused to comment when asked about the incident.

While investigating the alleged knifing, officers learned the same suspect had assaulted Mengarelli earlier that evening. However, no weapon was used and the mayor was not injured, police said.

Mengarelli did wish to press charges, so the suspect was issued a criminal citation for misdemeanor assault.

When asked why the suspect attacked him, Mengarelli told the Courier, “I really don’t know.”

In the police report, Mengarelli described the encounter with the suspect as “strange” and “uncomfortable.”

Mengarelli responded by saying that his grandfather served in the military, but he didn’t. The suspect then grabbed both sides of Mengarelli’s jaw and briefly shook Mengarelli’s head, according to the police report.

Mengarelli said he pulled away from the man and tried to ignore him for the rest of the time he was there, the report states. No other interaction occurred between the two men after that point. He said he left the party at about 6:10, shortly before the suspect allegedly assaulted the other two men.

Since the suspect is currently not facing any felony charges, the Courier is not publishing his name, per company policy.