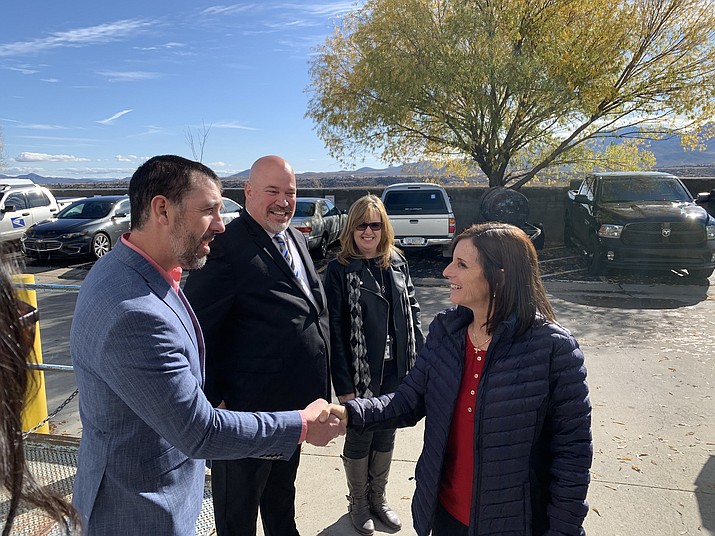 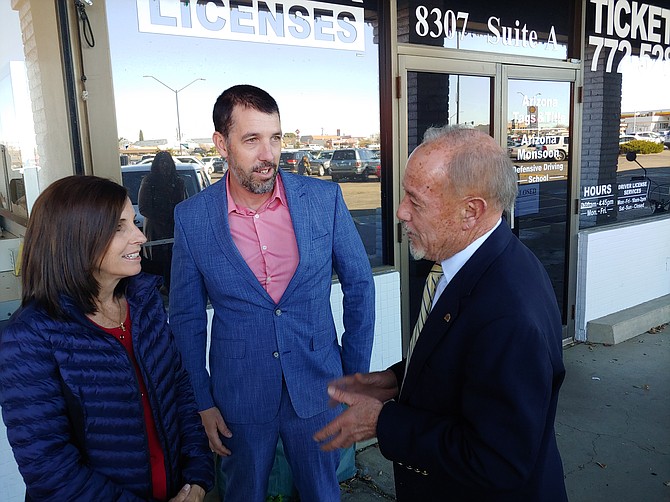 It’s rare for a small town in rural Arizona to get much attention from a U.S. senator, but that’s exactly what happened in Prescott Valley on a chilly Friday afternoon, Nov. 22.

“Parking, location, accessibility, and customer service,” Palguta said regarding the problems with the current post office. “The citizens love the staff; they love what they’re doing. It’s just accessibility cuts them down.”

As part of her one-day trip through the Quad Cities, McSally spent about an hour touring the post office’s site, a leased space that stands on the far-east side of a strip mall near Robert Road where The Daily Courier’s offices and its printing plant reside. She even bought some stamps at the front desk.

“We’re going to stay engaged; we want to build on that [Sen. Kyrsten Sinema’s letter supporting a new location for a PV post office] and see if we can get some others to show we’re supportive of efforts to take a fresh look at where this location is to best serve the community,” McSally said. “We thought it was important while we were up here for the day. We heard that this was an issue and I wanted to see it firsthand.”

During a 20-minute discussion in front of the post office, post office executive Richard Chavez said the PV Post Office is undergoing a “space constraint evaluation” to determine whether the building’s still viable for conducting all of the busy branch’s business for a population of nearly 50,000.

If the study shows the need for a new location, it’s likely that relocating the post office will move forward. “We’re concerned about our long-term growth — we’re expanding so quickly that you’re going to see a doubling of our population in a very short period of time,” Tarkowski said. “And, so, what serves us today is not going to be adequate and, I would argue, is not adequate [now].”

The study examines whether the current post office building is laid out efficiently. It also accounts for the community’s growth and the number of deliveries. Prescott Valley’s post office has four stations at its front counter. Prescott has five stations because it’s an older facility, post office officials say.

Chavez said that, on average, customers have a wait time of 3 minutes or less at the current PV Post Office, which is a leased facility. But that’s not how everyone in town sees it.

Palguta said it has been more difficult for customers here in recent years because much of the town’s population has shifted north, and away from the post office, rather than to the south. The satellite post office at Roberts Market closed years ago and the post office annex at 6545 E. Second St. does not handle walk-up customers.

Chavez said bringing back the satellite post office, or contract postal unit (CPU), at Roberts Market would be beneficial. That service will be going out for bid.

Much of the current post office’s business revolves around package delivery, as well as the visitors who constantly flow in and out of the two glass doors out front to check for mail in their post office boxes.

“We want to work with you and the community,” Chavez said. “One of the things we can do right away is to at least expand the package pick-up hours. We will try to expand them as the same hours as this [Highway 69] office.”

Added McSally, “And that could be really important documents or medicine.”

Postal officials argue that the swing-open window at the annex is designed to keep people from having to stand in line at the Highway 69 location.

The post office first attempts to deliver packages door-to-door. The exceptions are when there’s an unmaintained road that the carrier can’t access, someone’s requested a pick-up, or there’s not a safe, secure location for drop-off.

“People are always going to have to mail packages,” McSally said. “The package piece is never going to go away.”

In recent years, the post office has taken steps to move into the 21st century – offering free package drop-off at residents’ homes during regular business hours, and allowing for people to pay for and print their own stamps at usps.com.

The only issue with package drop-off is if no one’s at home and a package needs to be signed during delivery.

Some neighborhoods have parcel lockers next to their mailboxes, though. In the community of Coyote Springs north of Prescott Valley, the post office is currently doubling the number of parcel lockers it has.

Old habits die hard, however, and Prescott Valley residents seem to still like dropping off their packages at the post office, even if that means contending with a challenging parking situation.

“In the last 10 years, from 2009 to 2019, we’ve doubled our package volume, from three billion to six [billion],” Chavez said. “But during that same time period, we’ve lost 34 billion first-class letters and flats. So, that is part of the balance as well.”