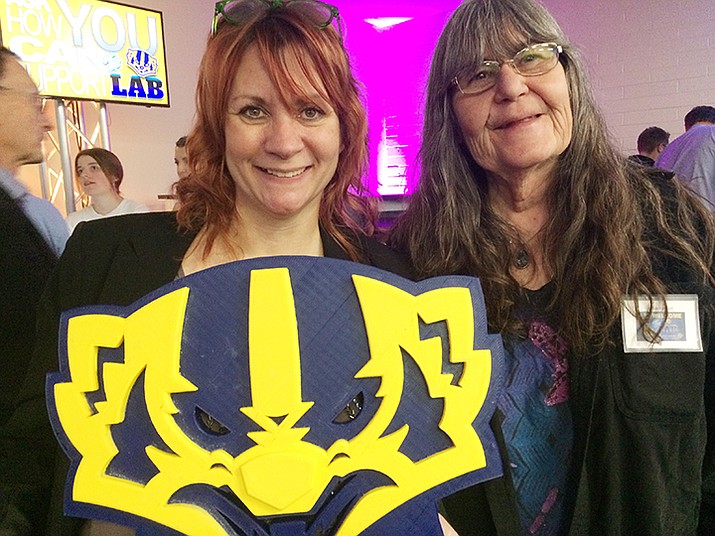 Prescott High film production and media technology instructor Robyn Bryce, left, the mastermind behind “The Lab” at Prescott High, shows off a three-dimensional creation of the high school Badger mascot. Standing with her is guest Leslie Hirchert for the grand opening ceremonies on Nov. 13. (Nanci Hutson/Courier)

To enter “The Lab” at Prescott High School is to be wowed by hard-to-fathom, yet real “Star Wars”-style technology.

Imagine taking a walk on the moon without a spaceship or hiking into Horseshoe Bend Canyon without a backpack and boots. Or composing and performing one’s own song without the need of hot water and a towel. 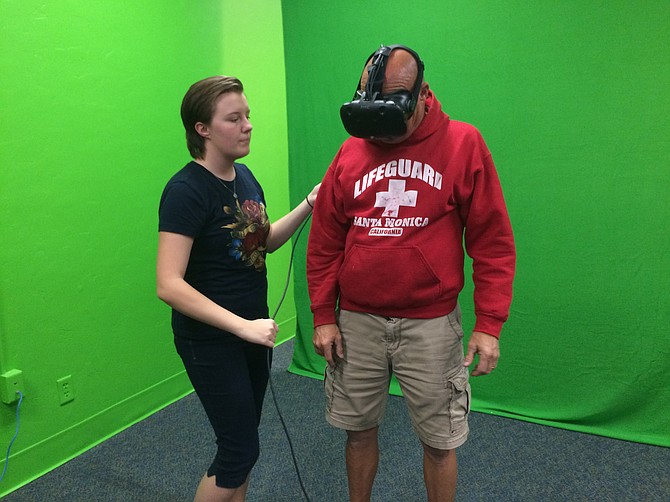 Baby Boomers, millennials and Gen Z teens all utter similar versions of these exclamations when they step inside the one-time woodshop space behind the cafeteria: “Awesome,” or “Way cool.”

Thanks to the creative imagination, vision and determination of Prescott High’s media productions and technology guru, Robyn Bryce, combined with the generosity and collaborative spirit of the Jewish Community Foundation, Prescott High is the first in the area to open its own creative media laboratory.

A $43,000 grant enabled Bryce to purchase equipment that would make Dr. Frankenstein smile — a drone, virtual reality equipment linked to Google Earth; a vocal sound booth hooked up to computers with print-out capabilities; a green screen with videotape and digital enhancement capabilities and a robotic arm with sky’s-the-limit creation possibilities — it is now equipped for laser etchings on assorted materials. Then there are the three-dimensional, programmable printers capable of making robotic parts, miniature, resin-based sculptures and other similar products known only to the creative thinker behind the tool.

“The Lab” also boasts a vinyl printer capable of producing large-scale banners, and a computer design center able to produce all types of graphics and other prototype products.

At a grand opening last week attended by more than 100 students, educators and a cross-section of professionals from the science, health, and technology industries, Bryce and Foundation Executive Director Christine Resnick delighted in sharing the origins and possibilities of this latest educational endeavor — one expected to be utilized and expanded, as students and staff figure out its potential.

“Think big,” Bryce said of advice she was given after attending a summer technology conference at the University of Nebraska where she saw a creative media lab in action. She knew she wanted to find a way to replicate it at PHS where she has taught for the last 12 years.

Over the course of the last year, Bryce worked with school administrators, the Prescott Unified Education Foundation and the Jewish Community Foundation to make what to some might seem “pie-in-the-sky” thinking a reality for high schoolers. In the last month, Bryce and a group of about 15 students have worked with technology experts to get everything hooked up and ready to go.

“I’m so excited that we can do this for our students,” Bryce said of the lab that right now is operating as an afterschool program as well as augmenting existing classes. 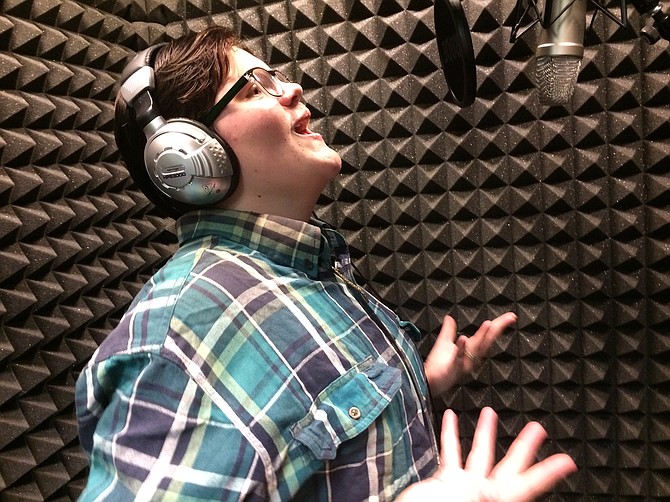 But Bryce hopes in the next year or so to make it the backbone of yet another career and technical education course with the potential to allow students to make and market products for sale.

Bryce is already partnering with Embry-Riddle Aeronautical University, where such technology is more commonplace.

With a grin spreading across her face and tears sparkling in her eyes, Bryce declared, “It’s fabulous what we’ve been able to do here.

“I think there is an opportunity for this to go somewhere. When students leave PHS they will be really college- and career-prepared,” Bryce said. “I’m so grateful to the community.”

“This is what Prescott is all about; what my job is all about. How do we think big?” Howard exclaimed. “Robyn is a dreamer, and we all jumped on board and helped make the dream come true. The Jewish Community Foundation did the (financial) heavy-lifting, setting up a legacy in this community.

“And we’re just getting started.”

Senior Bruce Sanchez, one of Bryce’ students, said he is awed by it all.

“It’s just amazing, to be honest,” he said as he worked computer screens next to the green screen as part of the open house demonstration. “I’m kind of overwhelmed.”

Standing inside the virtual reality area, Skyview Elementary sixth grader Ru Conner was proud to be operating the machinery that includes headgear and hand controls that enable people to travel all over the universe.

Senior Robin Hood said this technology is limitless, with the ability to augment lessons in ways that will leave a lasting impression on all participants. Plus it’s a lot of fun.

“I love this program (The Lab),” Hood said. “I’m so grateful to Ms. Bryce for broadening my horizons, allowing me to explore all that technology has to offer. This is a great way to end my senior year.”

Career and Technical Education Coordinator Jennifer Woods said she sees this creative media lab as the next wave of 21st century education for students. 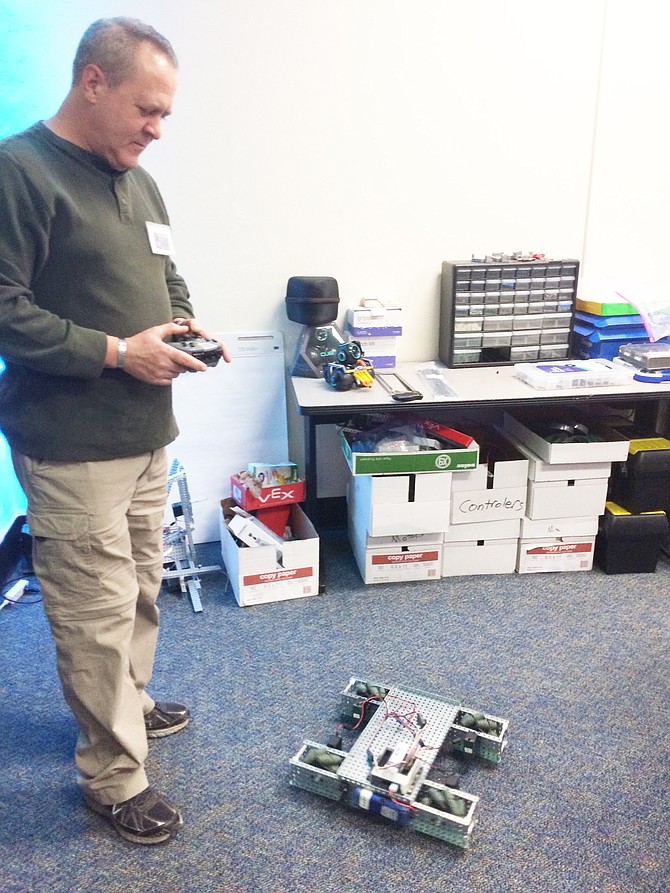 Prescott High father Bryan Houbeck plays with one of the moving robotics in “The Lab.” His son, Alexander, a senior, has become skilled in working with the robotic arm technology and other robotics offered in the new technology laboratory. (Nanci Hutson/Courier)

She said this technology will give students real-life experience in preparation for careers “that haven’t even been imagined yet.”

“The Lab is everything we thought it would be and more,” Resnick said of her foundation’s support.

She suggested the foundation’s partnership with PHS to enhance opportunities for students with technology “changes the trajectory of education.”

“We want to help them get to the finish line,” Resnick concluded.