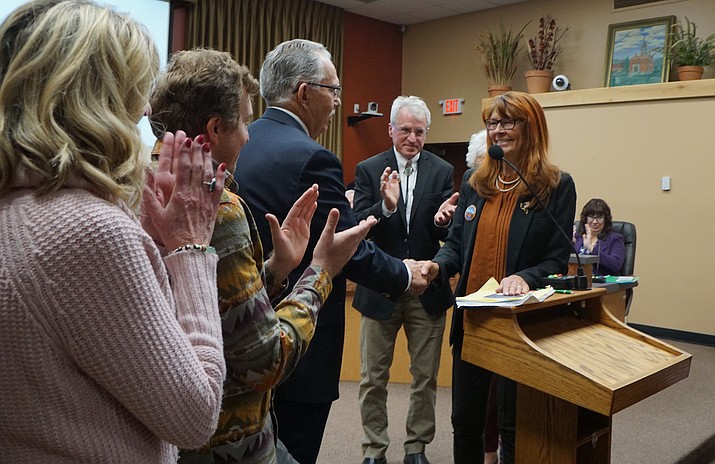 Newly sworn-in Councilwoman Cathey Rusing, right, shakes hands with City Councilman Phil Goode, who administered the oath of office, while Rusing’s husband Tom, second from right, and other family members look on. Rusing was the top vote-getter in the city’s August primary. She was elected to a four-year term. (Cindy Barks/Courier) 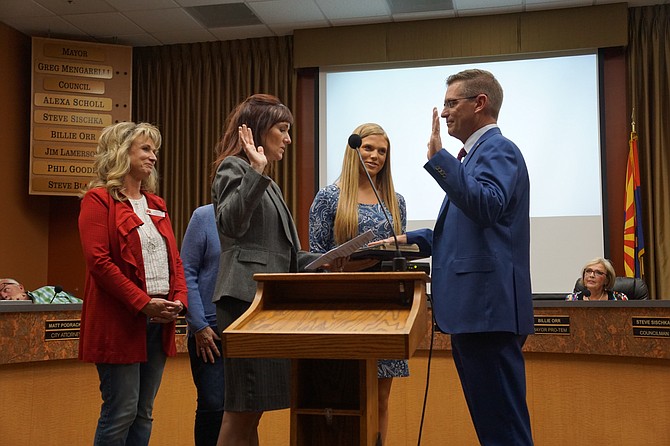 The multi-motion action on Tuesday, Nov. 19 took place just prior to the swearing-in of newly elected council members, including Councilwoman Cathey Rusing whose campaign had focused on the water policy, as well as incumbents Mayor Greg Mengarelli, Mayor Pro Tem Billie Orr and Councilman Steve Sischka.

Councilman Phil Goode continued his effort Tuesday for pushing off the water-policy vote until after Rusing was seated on the council.

As the top vote-getter in the August primary, Rusing had received a significant number of votes, Goode said, adding that it would be appropriate for her to vote on the water policy.

Although Goode renewed his motion from the Nov. 12 meeting to postpone a vote on the water policy changes, the motion failed for lack of a second by another council member.

Goode ultimately was the only council member to vote against the new water management policy, although he joined the majority in voting for several individual aspects of the policy.

As it has throughout its six-month review, the city’s water-policy shift generated continued public opposition this week.

A number of audience members spoke in opposition at the 1:30 p.m. study session discussion, as well as at the 3 p.m. voting session.

Local water advocate Leslie Hoy maintained that the city had failed to bring the public in soon enough on the formulation of the policy changes. And she called the public meetings that the city later conducted to inform the public about the changes “sham open-house” meetings. 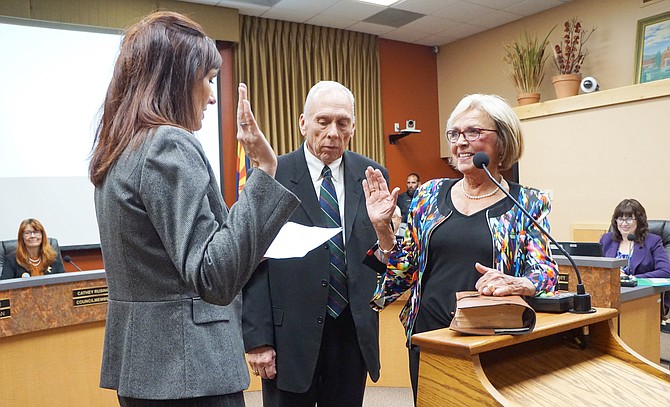 Local resident Ralph Hess voiced his support for Goode’s attempt to postpone the vote, noting that Rusing had received more than 11,000 votes in the primary. Allowing her to vote on the water policy changes would be “showing respect” to those voters, he said.

Rusing, who has maintained that the new water policy is pro-growth, emphasized that she was the only candidate who did not take developer campaign money.

She told the council that she found it “ironic” that she was being kept from voting on the policy by council members who did accept contributions from developers.

Still, most of the council members voiced strong support for the policy changes that they said would more accurately reflect the reality of the city’s water holdings.

Orr cited two major achievements from her first four-year term: The “stabilization of the general fund” through the passage in 2017 of the new three-quarter-cent sales tax to pay down the city’s pension debt; and “getting the truth out about water.”

She emphasized that the city’s old water policy of allocating a set amount of water to each new home had resulted in “over-allocating” about 1,500 acre-feet of water beyond what the homes and businesses were actually using. (An acre-foot equals 325,851 gallons of water).

City Manager Michael Lamar explained that for years the city had allocated 0.35 acre-foot of water per house. Although that was later changed to 0.25 acre-foot per house, Lamar said the average per-house use is actually 0.17 acre-foot.

Through the years, he said the city had over-allocated 1,500 acre-feet, which amounts to about $27 million (based on the market price of $18,000 per acre-foot).

Senior Assistant City Attorney Clyde Halstead explained that the new water policy would manage all of the city’s water sources, including groundwater and alternative water, as one source. 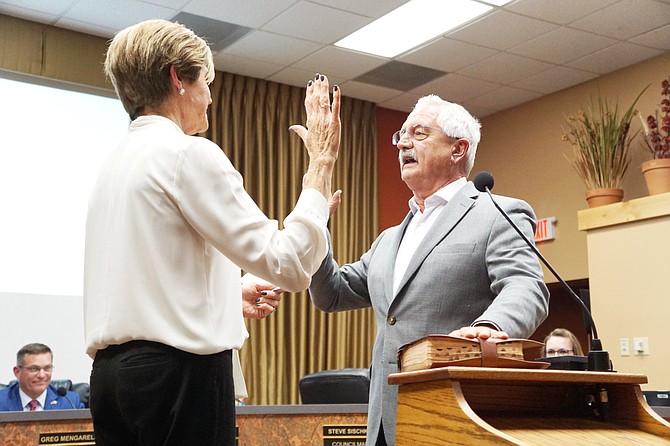 Halstead added that the city had conducted 14 public discussions of the water policy prior to this week’s meeting.

Along the way, city officials say the public input has resulted in a number of changes to the policy.

“I believe our water policy is better because of all of the input we’ve had,” Orr said.

Mayor Greg Mengarelli noted that the city has postponed a decision on several sections of the policy, including water service outside city limits.

He added that a new committee headed by Councilman Steve Blair would look into the issue of sewer and water hookups. The committee members have yet to be chosen, and Mengarelli said he expects the group to get started after the first of the year.

Meanwhile, he said, the new policy would have “no effect on anyone who has a current well, and no effect on those who are in the city and are not on city sewer.”