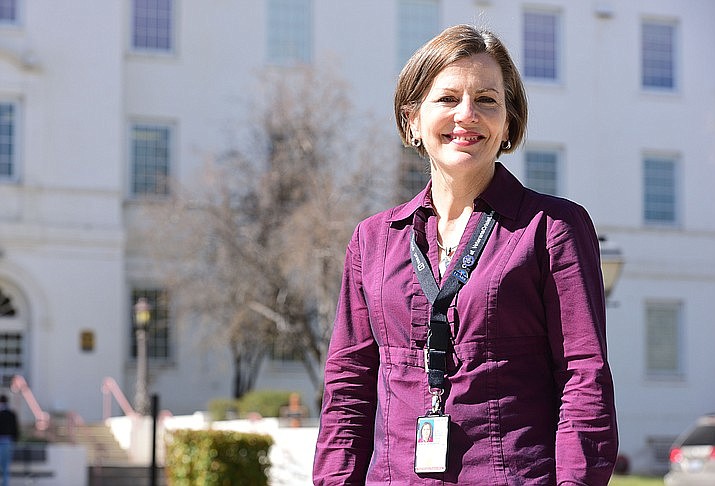 From the time she was appointed to her post in March 2017, the Prescott VA Medical Center Director Barbara Oemcke has been a busy lady.

On Monday, Oemcke announced she will retire as of Dec. 31, concluding a 36-year career in health care, the last 29 of those spent with the federal VA system.

Oemcke and her husband, Mike, a Vietnam veteran, moved to Prescott from Oregon where she was serving as the associate medical director at the VA’s Southern Oregon Rehabilitation Center and Clinic in White City. Oemcke has a bachelor’s degree in nutrition and a master’s degree in business administration. She and her husband together have five children and six grandchildren.

In her tenure at the Northern Arizona Veteran Affairs Health Care System, her first position as medical center director, the VA has been in a growth mode to the tune of more than $30 million of renovation and expansion projects. One of Oemcke’s early privileges was opening the 5,000 square-foot expanded spinal cord injury center.

In the next few years, the federal VA is expected to spend millions more on improvements.

One of her pet projects is an enhanced use lease arrangement that will allow a private developer to renovate six historic, former officer quarters into housing for at-risk and homeless veterans. With that novel project, the VA will retain ownership, but a selected developer absorbs costs and maintenance for up to 75 years.

As with any position, Oemcke has faced her share of challenges.

In July 2018, Oemcke endured a tension-laden loss of more than a dozen top administrators, including two members of the top administrative team that have since been replaced. She was charged with correcting deficiencies in its 85-bed short- and long-term convalescence center, the Community Living Center, after it received the federal VA’s lowest score. The facility has since seen significant improvement, and is now slated for renovation and expansion. 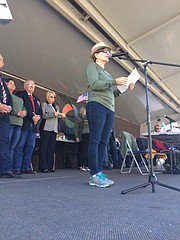 VA Medical Center Director Barbara Oemcke speaks at the Nov. 11 Veterans Day Parade in Prescott. Oemcke says that she will retire at the end of December. (Nanci Hutson/Courier)

Oemcke also oversaw the installation of a new communication system that was targeted as a means to enhance the ability for veterans to more promptly reach, and receive messages, from their medical teams.

In a news release, Oemcke was credited with making changes to human resources processes and imposing strategies for proper financial management.

The VA continues to roll out changes imposed by the new federal Mission Act that offers veterans improved access to community care when VA services are not available or there are long wait times.

Oemcke, too, has proved a vocal advocate for offering recruitment incentives suitable to attract more medical practitioners to the more rural regions of this state. This VA serves over 65,000 square miles.

From the start of her administration, Oemcke voiced a willingness to listen to veterans’ praise and criticism. She maintained that philosophy, overseeing numerous Town Hall meetings where she informed veterans about the organization and responded to their concerns and suggestions.

“I think Barbara did a nice job trying to fill a lot of open clinical positions that impacted the quality of care and quality measurements. So that was an improvement,” said City Councilman Phil Goode, an executive leader with both the local American Legion post and Veterans of Foreign War post.

“I hope the next director can continue the efforts she has made … I know it will take some time to find a quality executive director to replace her. I look forward to the opportunity to work with the new director when that person gets on board to support health care for veterans in our community,” Goode said.

Amid all the construction, and ongoing improvements, Mengarelli said Oemcke maintained a good working relationship with the city. He cited her as a “thoughtful and community-minded” leader.

“We will miss her in town,” Mengarelli said.

The federal VA will appoint an interim director to serve at the VA until a new permanent director is found, a news release stated on Monday.

“I will forever think of Prescott as one of the best places to live, work and play,” Oemcke said Monday. “I am honored to have been part of serving veterans in Northern Arizona, to have had the opportunity to improve our services and infrastructure so that veterans will continue to “Choose VA.”

“As I move into the next phase of life, I leave our VA in capable hands with a strong leadership team and 1,140 employees dedicated to serving veterans.”