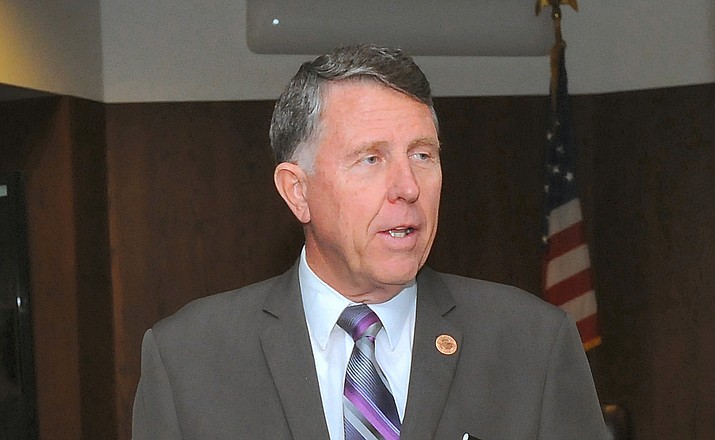 Sen. David Farnsworth has introduced two bills to cap the interest rate that can be charged by title lenders at 36%. That compares with rates that run as high as 17% — a month. (Howard Fischer/For the Courier)

PHOENIX — A Mesa GOP lawmaker is proposing what he concedes is a very un-Republican thing. Sen. David Farnsworth has introduced two bills to cap the interest rate that can be charged by title lenders at 36%. That compares with rates that run as high as 17% — a month.

Farnsworth also wants to close what he says is a loophole in law that allows people to borrow without actually having a title to their vehicle, a practice he says hearkens back to the now banned practice of payday loans.

“There’s a limit to everything,’’ Farnsworth said of his desire to clamp down on title loans, money borrowed with the title to the vehicle used as collateral. “The question is, are they being honest?’’

But Farnsworth said that really doesn’t paint a true picture for borrowers.

SB 1005 would change the law on title loans to have it spell out an annual rate, rather than a monthly one, and put the cap at 36%. And an even more aggressive proposal in SB 1004 would apply the 36% cap to the first $3,000 borrowed, with anything above that pretty much limited to 24 percent a year.

Farnsworth said this isn’t the first time he has found himself at odds with his party, at least on this issue.

For example, he cited a proposal several years ago by Sen. J.D. Mesnard, R-Chandler, to allow for something called “flex loans.’’

On paper, these would have carried a 36%interest cap.

But the key would be how lenders compute “customary fees’’ for everything from maintaining the account information, validating customer information, processing transactions and providing periodic billing statements.

Mesnard’s legislation, however, would have allowed those fees to total one-half of a percentage point of the outstanding balance.

On a maximum-allowed loan of $3,000, that could be up to $15 a day in fees — on top of the 36 percent interest — raising the effective interest rate into the triple digits.

Farnsworth said he and then-Sen. Kimberly Yee, R-Phoenix, who is now state treasurer, worked with Democrats to quash the plan.

“I know a lot of Republicans feel like, ‘free market, free market, everything’s good as long as it’s free market,’ ‘’ he said. But Farnsworth said it’s not that simple.

“I say we have to be responsible and consider the effects of what we do,’’ he said.

“A lot of people are being hurt,’’ Farnsworth continued. “I think we need to be responsible for everything that goes on in our state to the extent we can.’’

Farnsworth said he believes his views on interest caps are in line with the sentiments of most Arizonans.

He pointed to the 2008 election when voters decided to kill off payday loans despite lenders spending more than $17 million on the campaign to keep them legal. These short-term loan allowed people to borrow up to $500 for two-week periods — at interest rates computing out at more than 400 percent a year.

But Farnsworth said it’s clear that lenders haven’t given up.

“Now they’re coming back and calling them ‘registration loans,’’ he said, high-interest loans made by title-loan companies — but to people who do not actually own their vehicles outright. He said that is effectively the same thing as a payday loan.

“They found a loophole.’’

It is that “loophole’’ that Farnsworth said his SB 1003 would close by requiring “a clear title to the motor vehicle that the borrower uses to secure the loan.’’

There was no immediate response from the title lending industry.

But an initiative drive with similar language imposing a 36% annual interest cap drew opposition from Stuart Goodman, who lobbies for the Arizona Title Loan Association.

“Our customers are individuals that can’t get those rates,’’ he said, saying they are “high-risk individuals with bad credit’’ who have an immediate need for quick cash on a short-term basis.

That ballot measure would effectively outlaw title loans by capping the interest rates lenders can charge to no more than 36%. Backers need 237,645 valid signatures by July 2 to put the issue on the 2020 ballot.

But there may be another measure on the ballot next year that would trump both of those.

The National Credit Alliance is gathering signatures on a proposal that would give banks, finance companies and other lenders free rein to charge whatever interest rates they want to their Arizona customers.

That is crafted as a constitutional amendment, meaning that, if approved, it would take precedence over any state laws, whether enacted by the Legislature or voters.

Sean Noble, campaign manager of this proposal, said how much interest lenders should be able to charge should be “a market decision.’’

“If you can find somebody to give you a lower interest rate than somebody else, then that should be a competitive marketplace,’’ he said.