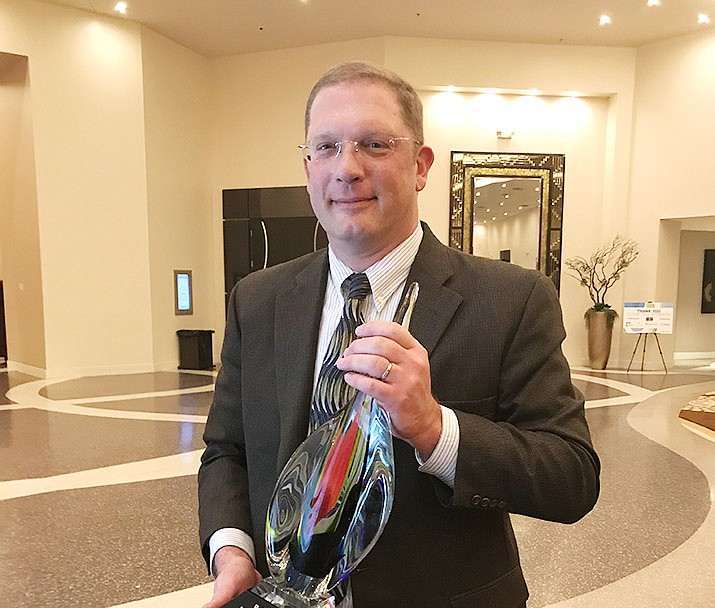 Brian Moore with his award in Phoenix. (Courtesy photo)

In a moment Prescott Unified School District administrators said left them “blown away,” the district Chief Financial Officer Brian Moore was selected as Arizona’s 2019 CFO of the Year by the Arizona Chapter of Financial Executives.

Out of a field of 30 finalists from companies across the state, the 46-year-old former math teacher and elementary principal promoted into the CFO spot three years ago was selected at the organization’s 13th annual awards dinner at the Chateau Luxe in Phoenix Thursday night.

“This was a big deal, bigger than we thought,” said district Superintendent Joe Howard after the award was announced. Howard nominated Moore for the honor.

In a message to staff on Friday morning, Howard said he was impressed with the caliber of nominees that came from every aspect of corporate Arizona. This was the first year the organization included an education category, and Moore was one of seven finalists.

Moore is continually praised by district leaders and supporters for not only how he manages the district’s $25 million operations budget, and tracks the $15 million bond expenditures, as well as other state and federal accounting practices, but how he keeps it transparent to the public. He created a color-coded budget sheet that is easy to read and comprehend for even those with minimal financial knowledge.

“It was quite a moment and we are certainly proud of Brian.” Howard wrote in his message. “The reality is that we/he just told the story of what he has done. It was a pretty unforgettable moment/night. Way to represent Brian Moore!!”