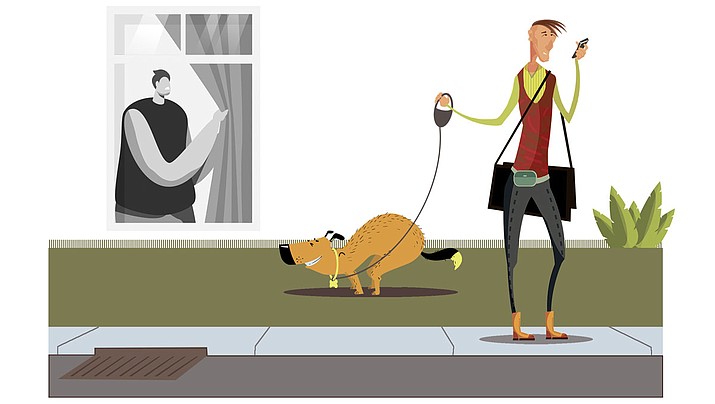 It didn’t take long for Pamela Cornett to be sold on PooPrints.

When you’re the manager of the new Homestead Talking Glass Apartments at 3131 N. Main St. in Prescott Valley, you do whatever you can to keep your luxury property presentable — and that includes ridding it of feces from residents’ dogs.

But what are you to do if those residents aren’t picking up after their pets? Well, in the 21st century, you’ve got DNA technology on your side.

And that’s where PooPrints, a company that tests dog poop for DNA identification, enters the picture.

“I like it — I’m glad we use it,” Cornett said with purpose about PooPrints from her office Nov. 14. “Think of your dogs like your children; pick up after them.”

When a prospective resident with a dog wants to rent an apartment at Homestead Talking Glass, he or she must consent to enrolling in the PooPrints program. It’s in the lease paperwork. There’s no money down; only a penalty for getting caught not cleaning up your dog’s doo-doo.

Registration involves acquiring a DNA kit at the apartment complex’s main office, getting the inside of your dog’s mouth’s cheeks swabbed, letting the swabs dry, and sending them off for processing. Data culled from a dog’s DNA is placed into a computer database registry for safekeeping.

However, the pet being tested can’t eat or drink for an hour before the test or it will contaminate the sample.

The names of the pet’s owner and the pet are included in the paperwork. To Cornett’s knowledge, her apartment complex is the only one in Prescott Valley to institute the program.

“PooPrints solicited us — it’s a known program in the Valley,” said Cornett, referring to its popularity in the Phoenix suburb of Scottsdale.

During registration for PooPrints, a resident fills out a card with his or her dog’s DNA number on it. Then, a staff member collects a sample of the dog’s poop and mails it into the processing center for matching to the DNA number.

Each dog that’s tested receives an ID number, which the apartment complex places on a dog tag. Cornett kindly asks each pet owner to attach the dog tag on his or her pet’s collar.

If a dog owner doesn’t pick up after his or her pet on the gated apartment complex’s property, staffers will collect the poop in a special bag, date it, write where it was found, and send it off for testing. When the results are returned to the complex, a report lists a DNA match with the pet. Violators pay a $200 fine.

It takes a week to a week and a half for results to be returned to the apartment complex via email, Cornett said. The email comes back with the pet’s name on it.

Staffers walk the property every morning, picking up trash and, if necessary, dog poop.

“We want to walk on walkways without stepping on something,” Cornett said. “We love pets; we just want residents to comply.”

On Nov. 14, Cornett had a problem, though. She had run out of DNA collection kits. Nevertheless, she was set to receive more of them on the 15th so she could distribute them to more residents with dogs.

You may be asking, why is this necessary? After all, Homestead at Talking Glass has a dog park and a wash station.

But if you were to speak with Cornett, you’d know why it’s a pretty big deal.

“Animals can be sick and carry disease,” Cornett said. “It is also unsightly, it smells terrible, and it could contain disease composition. We also don’t want a puppy that’s not vaccinated. All puppies need dewormed, too.”

Condo spends $2,500 on DNA kits to solve dog poop mysteries
‘Is this your turd?’: Missouri city’s cleanup flags dog poop
Dog-poop dispute ends with 1 man jailed, 1 with wounded hand
Bone marrow donors needed for those in need
Take the mystery out of your dog's breed