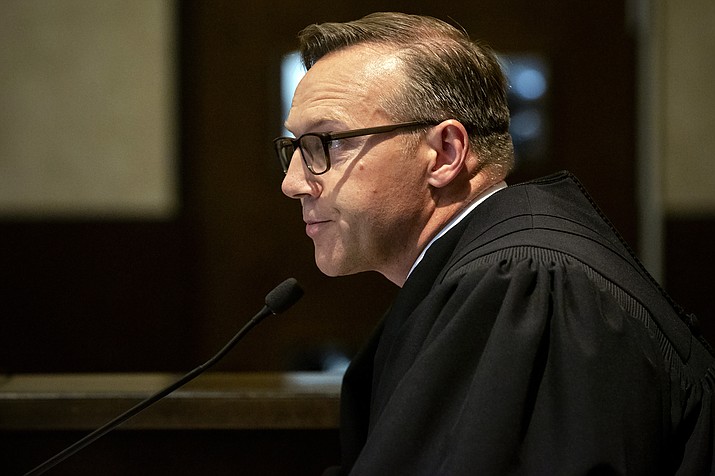 In this Aug. 26, 2019 photo, Judge Thad Balkman reads a summary of his decision in the opioid trial at the Cleveland County Courthouse in Norman, Okla. Judge Balkman reduces amount Johnson & Johnson must pay state to help clean up opioid crisis by $107 million to $465 million on Friday Nov. 15, 2019. (Chris Landsberger/The Oklahoman via AP, Pool)

OKLAHOMA CITY — An Oklahoma judge who last summer ordered consumer products giant Johnson & Johnson to pay $572 million to help address the state’s opioid crisis on Friday reduced that amount in his final order in the case by $107 million because of his miscalculation.

District Judge Thad Balkman’s latest order directs the company to pay the state $465 million. In it, Balkman acknowledged that he miscalculated in his original award how much it would cost to develop a program for treating babies born dependent on opioids. The cost should have been $107,000 not $107 million.

The judge declined a request by the defendants to further reduce the amount to take into account pre-trial settlements totaling $355 million the state reached with Oxycontin-maker Purdue Pharma and Israeli-owned Teva Pharmaceuticals.

Balkman also denied a request by Gov. Kevin Stitt, state House Speaker Charles McCall and state Senate President Pro Tem Greg Treat to intervene in the case and said he would not revisit the settlement in the future to order additional payments, as requested by the state.

“Though several of the state’s witnesses testified that the plan will take at least 20 years to work, the state did not present sufficient evidence of the amount of time and costs necessary, beyond one year, to abate the Opioid Crisis,” according to the order.

The governor’s office did not immediately return phone calls for comment while spokesmen for McCall and Treat said the two legislative leaders had no immediate comment.

Attorneys for Johnson & Johnson said the company plans to appeal Balkman’s ruling to the Oklahoma Supreme Court. The company did not immediately respond to a request seeking further comment.

“It’s a lengthy document. We are thoughtfully and thoroughly reviewing it and will respond in a timely manner. We will be providing a formal response in the next few days,” Gerszewski said in a statement.

Following a seven-week trial this summer, Balkman ruled Johnson & Johnson and its subsidiaries helped fuel the opioid crisis with an aggressive and misleading marketing campaign that overstated how effective the drugs were for treating chronic pain and understated the risk of addiction. Hunter says opioid overdoses killed 4,653 people in the state from 2007 to 2017.

Attorneys for the state have argued abating the opioid crisis in Oklahoma would cost between $12.6 billion for 20 years and $17.5 billion over 30 years. Attorneys for Johnson & Johnson have said that estimate is wildly inflated.

During the trial, Hunter called Johnson & Johnson a “kingpin” company that was motivated by greed and noted that two of the company’s subsidiaries produced much of the raw opium used by other manufacturers to produce the drugs.

Oklahoma’s case against opioid drugmakers is being closely watched because it was the first state opioid case to make it to trial and could help shape negotiations over more than 2,000 similar lawsuits filed by state, local and tribal governments consolidated before a federal judge in Ohio.

Oklahoma judge rules against drugmaker, orders $572M payment
As opioid settlements grow, so do questions about the money
Lawyers pause plan to divide any national opioid settlement
Maker of OxyContin agrees to $270M settlement with state of Oklahoma