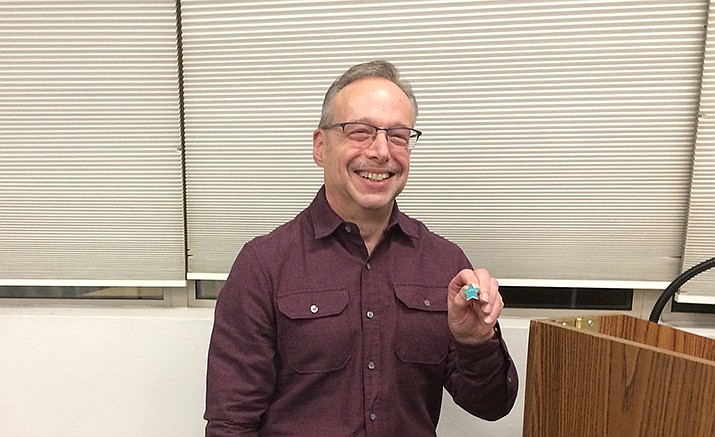 Humboldt Unified School District Governing Board Vice President Rich Adler is awarded the Arizona School Boards Association Turquoise Star for his dedication to serving as a board member. He is the district’s most veteran member with a 15-year tenure and some 300 hours of state board training. (Nanci Hutson/Courier)

If the Humboldt Unified School District Governing Board opted to seek a $25 million bonding package with a 20-year payback, the extra cost for a home assessed at $146,000 — the median range — would be just under $50 a year.

Don’t panic. Nobody is asking for anything yet.

The district’s financial consultant Michael Lavallee of Stifel, Nicolaus & Co. in Phoenix attended the regular board meeting Tuesday night, Nov. 12, to offer a bond update. He offered a few scenarios — $15 million, $20 million and $25 million — the board might wish to consider if they were to opt to seek a bond in the next couple years. The district’s total bonding capacity is about $90 million.

The community is in a strong growth period now, and that bodes well as it relates to tax implications for local voters, particularly given what those dollars would allow the district to provide, Lavallee said.

Such a bond would likely cover building maintenance and repairs, replacement school buses, technology and security upgrades, and other large, one-time expenses.

Humboldt Unified voters one year ago rejected a $15 million bond. The vote proved a disappointment to all district leaders as every dollar was intended to enhance what they can offer to all 5,700 of their students and 700-member staff.

Expect More Arizona explains that bonds are additional community voter-approved initiatives to pay for projects beyond what the state provides.

State dollars for capital expenses were frozen for a decade, forcing districts to make hard decisions about how to prioritize big ticket items, including roof repairs and computer technology, against adequate resources to achieve academic excellence at all levels, according to area educators.

Lavallee commended the board for at least starting a conversation early about these matters. The earliest they could seek a bond would be in the November 2020 General Election — and for which a bond vote would need to be called by June 2020, he advised.

Lavallee said his experience suggests that when districts across the state root their bond request based on needs rather than wants they tend to have “good results.”

Board Vice President Rich Adler said he appreciated the clear, concise information that “makes sense and gives us a lot to think about.”

Board members had no conversation about whether or not they intend to pursue a bond in the next year.

Superintendent Dan Streeter said this was strictly an informational update.

“It gives us clear information about the tax implications,” Adler said.

IN OTHER BUSINESS, the board was given a legislative update related to instruction for students who are not native English speakers.

Humboldt Unified leaders were applauded for already offering more inclusive instruction for these students. The new law attempts to move away from separating these students from the main population for large blocks of time.

HUSD is well-positioned for the launch of the new initiative rooted in its ongoing mission to provide a “world class education” to all of its students, presenter Robert Bueche concluded.

In opening ceremonial moments, Streeter was recognized for his completion of his doctoral degree. His Oct. 22 dissertation reflects a passion he has shown as the district’s highest leader. The title is “Personalized learning impacts on student achievement – a quantitative approach.”

Adler was honored by Arizona School Boards Association leader Karen McClelland with the Turquoise Star Award. The honor celebrates Adler’s more than 300 hours of training related to his 15 years of service as a Governing Board member and leader.