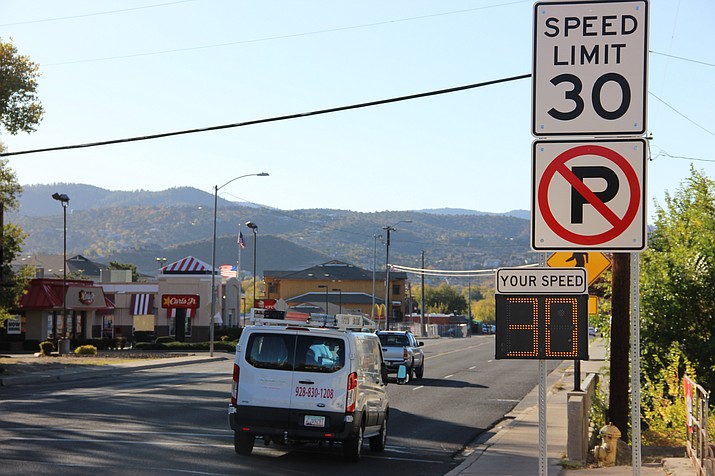 Radar speed signs appear to be here to stay, with some exceptional results.

Harken back to when Prescott Valley was the only municipality in the Quad Cities with photo radar signs from which drivers could receive a ticket in the mail.

Those have been gone since 2013-14, and since 2018 radar speed signs — that either merely display a digital readout of the driver’s speed or do so and record that data — have become commonplace.

The new signs help with law enforcement manpower, such that an officer or deputy does not have to be there, and they have a positive effect.

We were pleased to report this week that Prescott Valley Police found, for example, that between Aug. 13, 2018, and Aug. 27, 2019, a large majority of drivers were obeying the speed limit at two locations on Glassford Hill Road.

And, in the study period, there were only six crashes, which is significantly lower than the prior 12 months.

The fear of a ticket, if that’s what most would call it, has translated into similar results elsewhere.

“It’s a great tool. It certainly helps with our manpower,” Prescott Police Traffic Sgt. Nathan Barto said referring to the electronic devices that can be spotted on just about every major thoroughfare in the area.

The devices help police departments determine whether a particular roadway requires additional traffic enforcement at a particular time of the day — though each jurisdiction is approaching their deployment somewhat differently.

For instance, Prescott moves its five radar speed signs to different roads just about every week, often based on complaints, while Chino Valley Police might focus on school zones and Prescott Valley’s are solely on Glassford Hill Road.

Some surveys, however, show that the radar speed signs deter speeding in an area for only a specific amount of time. Thus, drivers in Prescott Valley could expect the Glassford Hill Road devices to be moved sometime in the future — possibly to Robert Road near Spouse Drive.

Our mantra was “if you don’t want a ticket, slow down,” when speed on the roadways was enforced by tickets through the mail. Now, it is a pleasure to report that most drivers are policing themselves.

Do the right thing, slow down because it is the law.