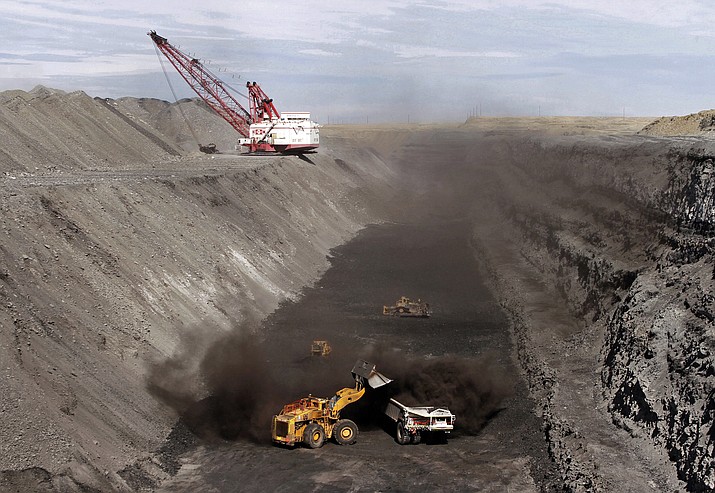 In this Oct. 9, 2013, file photo, a front end loader dumps coal into a hauler at a mining operation at the Navajo Mine in Fruitland, N.M. The Navajo Nation will not financially back bonds a tribal energy company needs for a trio of newly acquired coal mines off the reservation, the tribal president said Tuesday, Nov. 12, 2019, explaining that it's too risky and his administration wants the company to move away from coal. The Navajo Transitional Energy Co. recently bought Montana's largest coal mine and two mines in Wyoming at auction after Cloud Peak Energy declared bankruptcy. (Jon Austria/The Daily Times via AP, File)

FLAGSTAFF — The Navajo Nation will not financially back bonds a tribal energy company needs for a trio of newly acquired coal mines off the reservation, the tribal president said Tuesday, explaining that it's too risky and his administration wants the company to move away from coal.

The mines can keep operating for now because more than $370 million in reclamation bonds posted by Cloud Peak remain in place, state officials said.

Tribal President Jonathan Nez said he canceled agreements the energy company might have relied on to seek the Navajo Nation's financial backing for the bonds. He said he wants to protect the tribe's finances as revenues decline from the loss of a coal plant and mine on the reservation. Tribal lawmakers had been considering legislation to do the same thing.

"The Navajo Nation's financial portfolio as well as our resources would be placed in a state of uncertainty if we allowed NTEC to proceed with finalizing the bonds needed to operate these three mines using the (Navajo) Nation's consent ..." Nez wrote in a statement.

The development marks the latest turmoil to hit the Powder River Basin of Montana and Wyoming, the nation's largest coal producing region, where bankruptcies and declining demand have put a pall over a once-vibrant industry. Hundreds of people in the region were put out of work for months after another bankrupt company, Blackjewel, drastically scaled back operations at two of the biggest coal mines in the U.S.

The tribal energy company was created in 2013 to buy a coal mine in New Mexico on the reservation. It also owns a 7 percent stake in the nearby Four Corners Power Plant. While it was organized under the tribal government, it operates independently.

Nez said the legal documents creating the company gave the tribe's executive branch unilateral authority to administer what are known as general indemnity agreements. He said the bonds in place for the Navajo Mine and the Four Corners power plant won't be affected by his decision.

The energy company has said terminating the indemnity agreements could have serious impacts on the company's operations and increase the costs to secure reclamation and other bonds. It urged tribal lawmakers last week to seek other solutions to support bonds for the Cloud Peak purchases.

"NTEC has always considered these acquisitions to be highly advantageous and profitable," company spokesman Erny Zah wrote Tuesday in response to questions from The Associated Press. "While we understand the president's decision with regard to the indemnity agreements, we continue to see very successful operations and prospects ahead."

The Cloud Peak deal made the Navajo company the third-largest coal producer in the U.S. The deal covers Wyoming's Antelope and Cordero Rojo mines and Montana's Spring Creek mine. About 1,200 people are employed at the mines, which combined produced almost 50 million tons of coal last year.

Antelope is the third-largest coal mine in the U.S., while Spring Creek ranks eighth and Cordero Rojo is 11th.

Lining up bonds on its own could be a challenge for the tribal energy company, given the state of the coal industry, said Joe Aldina, a coal industry analyst at the research firm S&P Global Platts.

A succession of coal company bankruptcies already put state regulators on "high alert" to make sure companies have the financial wherewithal to conduct cleanups, he said. Also, a decade-long wave of coal-fired power plant retirements has decreased demand for the inexpensive but heavily polluting fuel, which could make financial firms hesitant to get involved with reclamation bonds.

"Bonding companies are going to be more skeptical," Aldina said. "They are going to require more collateral or higher interest rates or they're just not going to extend these surety guarantees."

State regulators are unlikely to release the Cloud Peak bonds until the mines' new operator can come up with bonds on its own. That means taxpayers in Montana and Wyoming won't be left on the hook for future reclamation or cleanup costs.

"They can operate like this as long as they like, because Cloud Peak has the permit," said Keith Guille with the Wyoming Department of Environmental Quality. "We cannot review the permit until they show they have bonds in place."

At Spring Creek, NTEC has indicated it will cover for now the fees needed to maintain the existing $109 million reclamation bond that was in place when it bought Cloud Peak's assets, said Montana Department of Environmental Quality spokeswoman Rebecca Harbage.

Those fees amount to about 1% of the bond total, or about $1 million annually, Harbage said. She did not know if any payments have been made to date.