Vision to renovate historic Prescott homes moves to next step 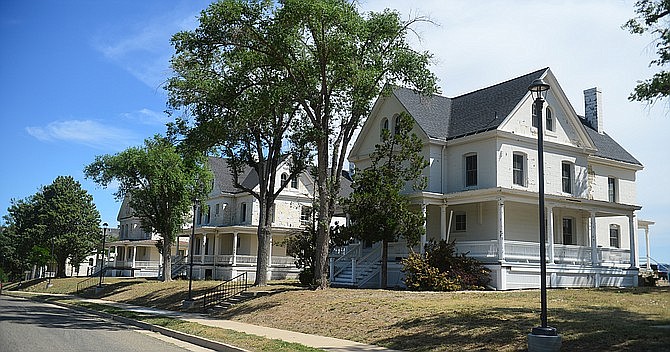 The process to convert six of the Prescott VA’s historic, Victorian-style homes on its campus off Highway 89 into housing for vulnerable veterans is making slow but steady progress.

Federal VA authorities earlier in the year offered a nod to what is called an “enhanced use lease” for the properties located next to the Fort Whipple Museum. The lease is essentially a public/private partnership where the VA retains property rights but a developer takes responsibility for the cost of construction, maintenance and property management. Positive feedback was received on the proposal during a June public hearing.

The latest step forward is the federal VA’s “request for qualifications” from various developers or nonprofit housing agency that might be interested, and deemed capable, of undertaking such a renovation. The houses would be converted into rental apartments for individual or veteran couples, most likely studios and one-bedroom apartments. The Prescott VA, too, has an additional three acres adjacent to the houses that could be developed into some type of housing complex.

Local VA Chief Engineer Terry Boyd said this is a first, and crucial step, in the multi-phase selection of a potential developer the federal authorities believe could manage and execute the project.

Boyd said he will be giving tours in the next couple weeks to some prospective developers, and will continue to do so as interest dictates.

The federal Office of Asset and Enterprise Management deadline to accept those requests is Jan. 10.

The magnitude of what will surely be a multimillion renovation, complete with restrictions rooted in the fact that these are historic properties, all have to be weighed by anyone who might wish to make such a proposal, Boyd said.

The VA and area veteran-support organizations are excited by the potential. The setting is viewed as ideal for veterans who rely on other VA services, and would prefer to live in close proximity to those resources.

The need for this type of housing is not in question, but the enhanced lease concept is relatively new, and would require the right people to make it happen, he said.

Local VA officials have identified 116 veterans in Yavapai County who are either in transitional or other programs who need long-term, affordable housing, including some who have federal housing vouchers but cannot pay more than $796 for rent and utilities.

Though the VA has garnered support from the state Department of Housing and state historic preservationists, Boyd said he is far from ready to plan a groundbreaking ceremony.

“We’re optimistic, but it’s not a done deal,” Boyd concluded.