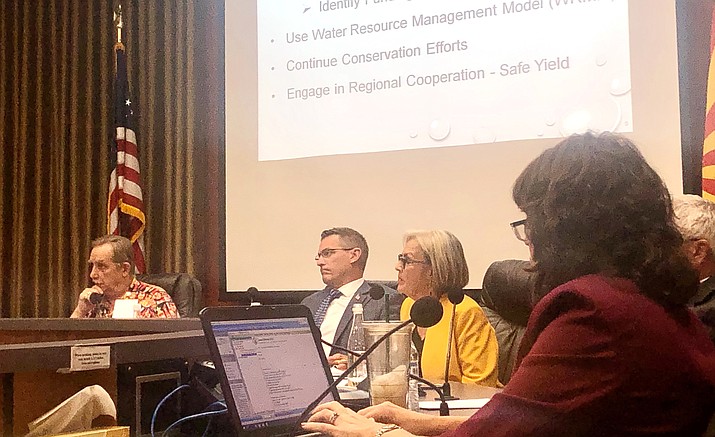 After months of discussion, the Prescott City Council is poised to decide a host of water policy-related changes this week.

Also on the council voting session agenda is a rezoning decision that could make way for a new Banner Health hospital in the Whispering Rock subdivision planned along north Willow Creek Road.

All of the meetings will take place at Prescott City Hall, 201 S. Cortez St.

Up for a vote on the water-policy changes are nine separate motions on various aspects of the measures that the council has been reviewing throughout much of the past summer and fall.

The city earlier announced that the council would postpone a decision on the controversial section that would allow for water service outside city limits.

Senior Assistant City Attorney Clyde Halstead explained Friday, Nov. 8, that while that section of the policy changes would be on the agenda this week, the action items reads: “No new water connections may be made outside of city limits unless exempt by prior agreement.”

If and when the council decides to consider whether to move ahead with the section that would allow the city to offer water service outside city limits, Halstead said the matter would have to go back before the council, and the wording would have to be changed.

Meanwhile, the council will consider moving forward on the new Water Management Policy, along with amending the city codes relating to water policy and conservation.

A city memo states: “As a result of public input and council direction, proposed changes to the water policy and code amendments are recommended. Items for further study and/or consideration into the future include regional cooperation, sewer connections and water outside the city limits.”

The proposal to allow water service outside city limits generated the most opposition in the community among the various proposed changes.

On Nov. 1, the city announced in a news release that a vote on that section would not take place on Nov. 12, as planned. The news release added, however, that city leadership, including Mayor Greg Mengarelli, continues to believe that providing water outside city limits makes sense and would result in better conservation of the city’s water resources.

Halstead was uncertain Friday when the proposed change would go back to the council for further discussion. He said it would be a decision of the council — likely after the newly elected council members are sworn in on Nov. 19.

Also up for a vote is a rezoning that would set the stage for development of a Banner Health hospital along north Willow Creek Road, across from Embry-Riddle Aeronautical University.

On Sept. 11, 2018, the council approved four separate actions relating to the annexation and development of a 79.2-acre parcel for the Whispering Rock subdivision.

Although the project is planned to include mixed uses, local doctor Hojat Askari, the property owner, has said that medical uses would be the major focus of the project.

A city memo explains that the change would allow for the option of a higher building height for a hospital.

After the annexation and zoning to business general were approved last fall, the property owner reportedly engaged in negotiations for development of a hospital on a portion of the site.

“Hospital uses often involve larger and taller structures, and the BG zoning district does not permit building heights in excess of 50 feet,” the memo states. “In this situation, the hospital proposes to exceed that 50-foot limitation, with a height of up to 71 feet.”

The city’s business regional zoning allows for a height of up to 100 feet, with a special-use permit.

Also on the agenda:

• Conduct an executive session at 9:30 a.m. to interview applicants for a new Prescott City Clerk to replace current Clerk Maureen Scott, who will retire in December.

• Conduct a study session to discuss a runway extension-focused planning study for the Prescott Regional Airport.