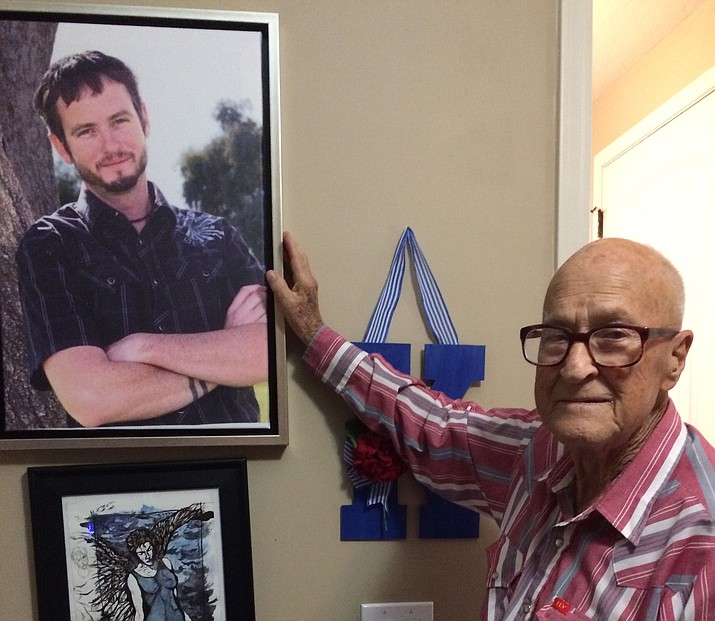 Barney standing next to a tribute to his late grandson, United States Army Sgt. William Henry Higginbotham III, who died at age 32 in a helicopter crash in Montana. Higginbotham served seven years, deployed with the 173rd Airborne Divison where he served a tour in both Iraq and Afghanistan as a paratrooper. (Nanci Hutson/Courier)

On this Veterans Day, and every day, Prescott Korean War-era United States Army veteran Barney Kennedy said he feels a sense of patriotism that extends beyond his own service. He so admires the sacrifices of so many who, unlike him, never came home.

His depth of gratitude for his fellow servicemen and women inspired him to sell at a discount his Coolridge, Arizona shoe repair and leather goods shop as an outreach program for struggling veterans.

The widower becomes teary-eyed as he proudly shows off photographs of his grandson, Army Sgt. William Henry Higginbotham III, who he nicknamed “Dub.” Higginbotham, whose mother, Terri, is married to the second of Kennedy’s children, Tim, in Prescott, served in the 173rd Airborne Combat Brigade and did tours of duty as a paratrooper in both Iraq and Afghanistan during his seven years of service.

In 2013, Higginbotham, 32, a chief pilot for Lucas Oil, was killed in a helicopter crash in Montana. 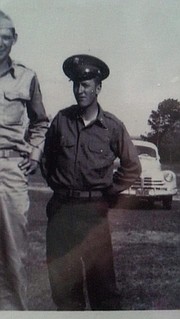 The 89-year-old native of Oklahoma, who loves to paint rocks and entertain his Good Samaritan hospice caregivers with his life stories, admits his brief stateside stint in the military — two years and two days — “means a lot more to me today than it did then.”

The Korean War was almost at an end when Kennedy was drafted into the Army.

“I didn’t much go for it at the time. I was kind of teed off (with his draft notice),” recalled Kennedy, who just recently moved from living with his son, Tim, and William’s mother, Terri, in the Yavapai Hills neighborhood in Prescott to the Arizona Pioneer Home.

Today, he counts himself fortunate and grateful he was able to serve the nation he so loves, both in the military and as a civilian businessman.

“The good Lord blessed me that I didn’t have to go (to Korea),”said Kennedy who was first stationed in Alaska then moved to Texas and finally ended up on a base in Alabama.

Kennedy chuckles that his most dangerous duty was a two-day assignment “peeling potatoes.”

After he departed the service, Kennedy joined his family’s shoe business. He and his wife of 53 years, Joann, who died 13 years ago, raised three children: Vicki, Tim and Randy, who is now deceased. Kennedy boasts nine grandchildren and eight great-grandchildren.

“It’s a big bunch,” he said with a smile as he offered a tour of family photos in his son’s home.

In honor of his grandson, Kennedy opted to launch something to help less-fortunate veterans, particularly those who end up homeless. He sold his shop to what is now known as the Open Hand Outreach Center at Kennedy House. Since his grandson’s death and the start of the center, the center has been providing social, emotional, counseling and addiction supports to Pinal County veterans.

“And it’s there to stay,” Kennedy said.

Kennedy praises the local VA for its health care programs to veterans, and said he is awed at how the country today is beginning to rally around the military in ways he didn’t see earlier in his life.

The doorstop at his son’s home is a large chunk of rock Kennedy painted into a resemblance of the American Flag: He titled it “Old Glory.”