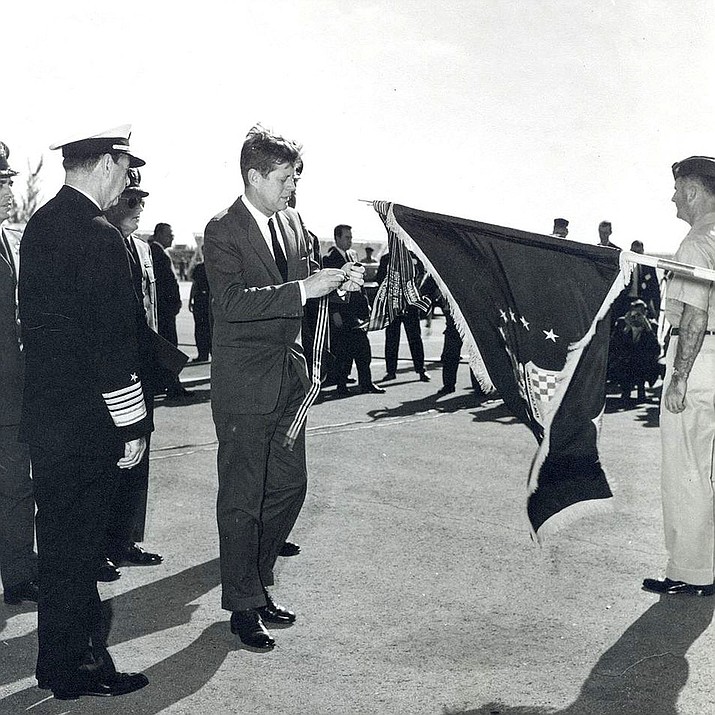 President John F. Kennedy places a streamer on the colors of the 363rd Tactical Reconnaissance Wing to present the Air Force Outstanding Unit Award in recognition of the unit’s actions associated with the Cuban Missile Crisis. I felt very proud standing in formation on the flight line at MacDill AFB that day. (Courtesy)

During 1960 to 1964, I was an Aircraft Mechanic (Crew Chief - RF 101) for the 363rd Tactical Reconnaissance Wing which was based at Shaw Air Force Base in Sumter, South Carolina. During my four years in the USAF, the Cuban Missile Crisis provided some of the most interesting times.

The Cuban Missile Crisis, also known as the October Crisis of 1962, was a 13-day (Oct. 16–28, 1962) confrontation between the United States and the Soviet Union initiated by the American discovery of Soviet ballistic missile deployment in Cuba. The confrontation is often considered the closest the Cold War came to escalating into a full-scale nuclear war.

During October 1962, while Strategic Air Command U-2s flew high-altitude reconnaissance missions, the staff of the 363d Tactical Reconnaissance Wing at Shaw AFB, South Carolina, was made aware of the potential need for low-level flights over Cuba.

Mission planners at Shaw AFB began planning such flights and preparing target folders. On Oct. 21, HQ Tactical Air Command ordered the 363rd to deploy to MacDill AFB, Florida. The wing began immediately to move RF-101 Voodoo and RB-66 Destroyer aircraft, personnel, and photographic equipment to Florida. By the next morning, the aircraft were at MacDill Air Force Base cameras cocked, ready to carry out any reconnaissance missions.

On Oct. 26, the 363rd launched the first flight of two low-level reconnaissance RF-101 aircraft. For the next three weeks, wing aircraft, by photographic and visual reconnaissance, gathered vital data, including prestrike intelligence, air-surveillance verification of Cuban buildup and subsequent dismantling of the IRBM and MRBM sites and Soviet Ilyushin Il-28 jet tactical bombers.

Like the Navy’s RF-8A Crusaders, TAC RF-101 Voodoo reconnaissance aircraft from Shaw AFB continued to fly high-speed low-level sorties over Cuba on a daily basis, photographing suspected missile sites and Cuban military bases. In some cases, the films were flown directly to Washington, D.C. and onto President John F. Kennedy’s desk within hours of being taken.

On Nov. 2, 1962, Kennedy addressed the US via radio and television broadcasts regarding the dismantlement process of the Soviet R-12 missile bases located in the Caribbean region. The ships left Cuba on Nov. 5 to 9. The US made a final visual check as each of the ships passed the blockade line. Further diplomatic efforts were required to remove the Soviet Il-28 bombers, and they were loaded on three Soviet ships on Dec. 5 and 6. Concurrent with the Soviet commitment on the Il-28s, the US government announced the end of the blockade from 6:45 p.m. EST on Nov. 20, 1962.

On Nov. 26, 1962, President Kennedy presented the Air Force Outstanding Unit Award to the 363 Tactical Reconnaissance Wing in recognition of the unit’s actions associated with the Cuban Missile Crisis.

The Outstanding Unit Award is awarded to any unit of the U.S. Air Force (including the Air Force Reserve and the Air National Guard) which performs exceptionally meritorious service, accomplishes specific acts of outstanding achievement, excels in combat operations against an armed enemy of the United States or conducts with distinct military operations involving conflict with, or exposure to, a hostile action by any opposing foreign force.

The benefits I received, and am still receiving, for serving for four years in the USAF has been very impactful on my life. My degree from UC Santa Cruz was paid for by the Vietnam Era GI Bill and my health care is taken care of by the Northern Arizona VA Hospital in Prescott.