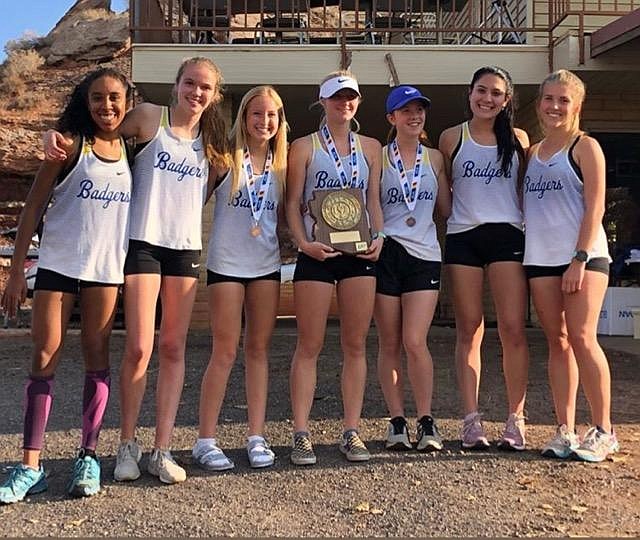 The Prescott girls cross-country team poses for a photo after taking first place at the sectional meet on Friday, November 7, 2019, at Hidden Cove Golf Course in Holbrook. (Cylinda Bray/Courtesy)

HOLBROOK — Prescott cross-country absolutely flourished at the sectionals meet on Friday as the girls took first place while the boys finished second to qualify them for state.

The 16 teams from Division III Section IV traveled to Hidden Cove Golf Course in Holbrook to compete for the top-eight spots that qualify for the state meet. The Badgers certainly made their presence felt, especially on the girls side as they placed first with 49 points, a staggering 35 points ahead of second-place Ganado (84 pts).

Prescott’s Makenna Bray was the meet’s top runner, taking first with a 19:38 in the 3.1-mile race. Emily McMahon came in right behind Bray, finishing second with a 19:40 time while Briar Williams placed fifth with a 20:06.

On the boys side, the Badgers ended up with 58 points, six points shy of first-place Page (52 pts). Nevertheless, a second-place finish will more than suffice as four of their runners finished within the top 15.

The Bears were not able to grab one of the qualify spots as the boys placed 14th while the girls placed 15th. Individually, no Bear finished within the top 25 to qualify for the state meet either.

Since Chino Valley is in Division III Section III, the Cougars competed in a different sectional meet than Prescott and Bradshaw Mountain, who are both in Section IV. For their race, the Cougars along with 21 other teams competed at Cesar Chavez Park in Phoenix.

Despite the girls taking ninth place, which was outside of the top-six qualifying spots, Leslie Estrada did qualify individually by placing within the top 25. She clocked in at 22:33, good enough for 21st place.

The state meet will take place at Cave Creek Golf Course in Phoenix on Saturday, Nov. 16.