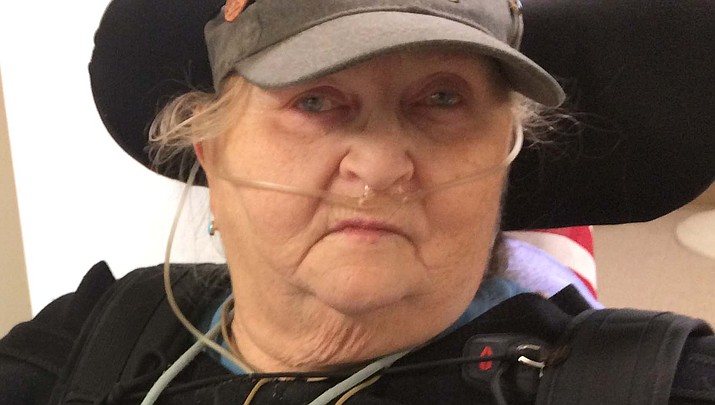 United States Army Vietnam-era veteran Cornelia “Sarge” Smith is a talented artisan who refuses to allow her creative juices to go dry simply because she is now legally blind and confined to a wheelchair.

A gifted silversmith, goldsmith and leather crafter —she still carries the first leather wallet she crafted complete with embossed leaves on one side and a collie face on the other — the 69-year-old former staff sergeant just completed her first canvas painting of a covered bridge. Smith said she isn’t wild about the finished product mounted on a wall in her room at the Prescott VA Community Living Center.

Dillinger was quick to admire Sarge’ style, one that emerged during the VA’s first women’s-only “Heal Her Heart” art class scheduled on Oct. 19. The VA intends to offer the class on a quarterly basis beginning in January.

Dillinger showed a visitor one of Sarge’s coloring book seahorse pictures colored with expert precision with fine-tipped pencils in assorted shades — not something one might expect someone with limited vision to be able to accomplish. Not to mention the incredible stone and gem work she once crafted at home into stunning silver jewelry adorned with turquoise, malachite and one she identified as “apple coral.”

As she admired the painting, Dillinger suggested to Sarge it was an admirable piece of work for someone who never before picked up a paintbrush. The praise earned a polite nod. 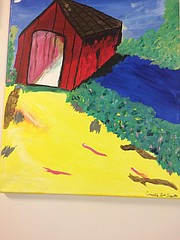 An example of the artwork of Staff Sgt. Cornelia "Sarge" Smith. (Courtesy)

Before she became a full-time CLC patient three years ago, Sarge said she operated a home-based jewelry crafting business. In past years, Sarge has contributed a number of her jewelry pieces into the VA’s spring Creative Arts Festival.

She said she learned leather crafting from her beloved father, Lewis, who carried her basic training photograph from 1969 in his wallet until he died in 2007.

In the military, the Kingman native didn’t have a lot of time for artwork. Her basic training assignment during the Vietnam War period was at a base in Alabama before she was assigned to a base in Georgia and then back to Arizona over the course of the next three years. She then joined the active Reserves for a couple years, where she worked as a recruiter before joining civil affairs in Santa Monica, California where she earned the rank of staff sergeant. She returned to the Army full time in 1974 and joined the military police in Fort Gordon, Georgia. She was sent to drill-sergeant school in South Carolina where she was injured. She returned to Fort Gordon until her discharge.

Sarge is particularly proud that her name is included in a wall at Arlington National Cemetery celebrating honorably discharged women veterans.

Sarge explains that her exploration of her creative talents came after she left the Army. She earned two art degrees at Mohave Community College.

In and out of a wheelchair since 1976, Sarge said she needed a way to earn a living and also cope with her personal frustrations. The options were sales and crafting jewelry.

She opted for the jewelry, beginning with beading and leatherworks before taking workshops in silver and goldsmithing, as well as working with lapis stones.

Though today she only has about 50 percent use of her hands, is legally blind and no longer has access to her jewelry-making machinery, Sarge said she is determined to find new ways to express her talents.

She never misses the Veterans Day parade, and for the last several years participates in the VA’s 2K race in her wheelchair.

“Don’t give up on yourself.”