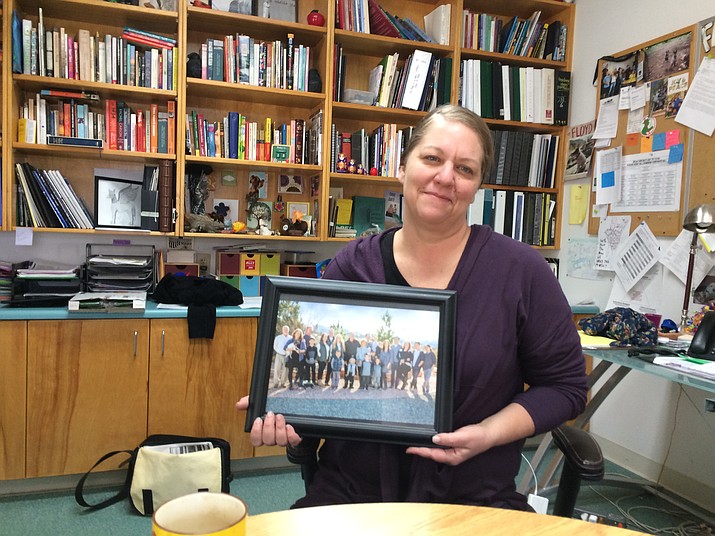 Melissa Wagoner poses with a photograph of her extended family in the office of her “second family” at Northpoint. (Nanci Hutson/Courier) 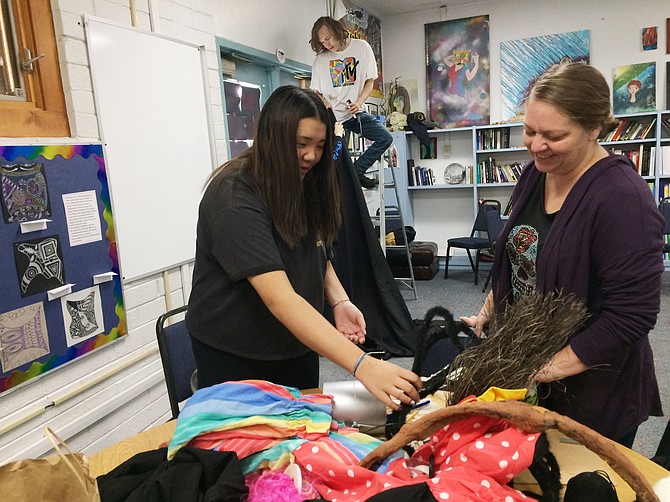 Wagoner talks with senior Tashi Genshock; in the background is sophomore Liam Flanagan on a ladder. (Nanci Hutson/Courier)

Melissa Wagoner is no stranger to hubbub.

She thrives on it, quite frankly — a good thing as she’s surrounded by teenage hormones every day.

Now in her second year as director of the Northpoint Expeditionary Learning Academy — the first year also heading up the middle school addition started for the 2018-19 school year.

“I feel like I just facilitate the awesomeness here,” said Wagoner of the charter school that has 200 students and 27 employees. “Northpoint is a microcosm of Prescott. We have the straight-A students and struggling students who have found their first success here.”

No stranger to the school, the two-decade educator who earned her master’s degree in education at Prescott College has worked at Northpoint for the past 14 of those years. Prior to Northpoint, she spent five years as an English teacher at Prescott High School and one year at a charter school in Mayer.

She admits she was reluctant to become a teacher, starting her career in business before heeding her mother’s advice to become an educator. Then she said she was so connected to students she didn’t want to leave. She was coaxed at Northpoint into becoming an instructional coach before she was then called to the top post.

And her colleagues and students consider her a perfect match for the role.

“I can’t imagine working with a better leader,” declared guidance counselor Alison Zych, who has been at the school for 13 years. “She is someone who really understands and identifies how important our work is. She meets students where they’re at. She’s honest and thoughtful. She empowers students to take on their own learning.”

Former student Megan Smuin-Breiner, who Wagoner hired as the front office receptionist, describes her alma mater as a “second family.” Wagoner, married to husband, Kevin, may have no birth children but is a mother and role model to every students who walks through the front door, she advised.

“She’s pretty great,” said sophomore Liam Flanagan as he and some peers were preparing for the school’s recent Halloween festival. “You can talk to her. And she runs the school really well.”

As a high schooler, Wagoner said she was miserable.

“I felt invisible. I felt I could think like an adult but I had no adult rights or privileges. I had a job and contributed to the household, but I was treated with condescension as a child,” Wagoner said.

So she understands adolescent’s constant tug-of-war with their in-between status in life.

“I see them as mini-adults,” Wagoner said. “I love helping them think through why they did what they did.”

Northpoint offers numerous opportunities for students to enjoy authentic learning and contributing to their community, near and far. One group of students in December will be helping rebuild homes in New Orleans.

“I feel a spiritual lift by leading this positive, healthy community,” Wagoner said. “The people who work here really dig each other.”