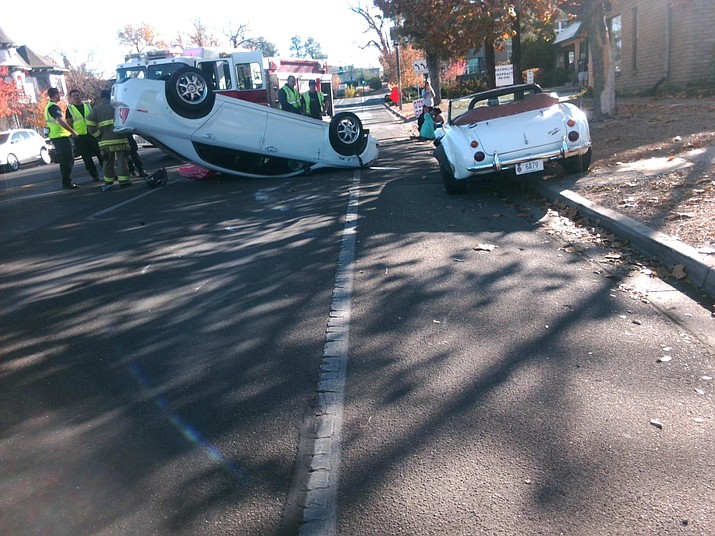 A Prescott woman who was driving to pick up her children at school Thursday afternoon, Nov. 7, had to be extricated from her vehicle after allegedly crashing into a parked car due to being intoxicated.

Prescott Police Department (PPD) officers responded to the crash in the 100 block of Grove Avenue at about 2:45 p.m., according to a PPD news release.

They found a sedan resting on its roof in the middle of the road aside a parked antique sports convertible. 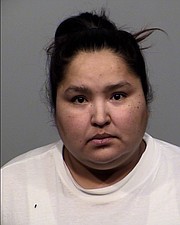 Through an investigation, officers determined that 31-year-old Karen Palacio De Mancillas of Prescott was southbound on Grove Avenue when her car collided with the properly-parked, unoccupied convertible on the west side of the road, causing her vehicle to roll, the release states.

Prescott firefighters had to break windows out of the rolled car to extricate the woman, who suffered minor injuries, the release states.

A small dog belonging to the woman was also in the car. Lt. Jon Brambila with PPD said the dog was uninjured, but Prescott Animal Control did have to take possession of the animal because there wasn’t anyone on scene to release it to. He said the dog was returned to the woman once she was released from jail.

Grove Avenue was temporarily closed while first responders cleared the scene, but was re-opened a short time later.

When officers spoke to De Mancillas, she exhibited signs of impairment and provided a partial breath sample on scene, the release states. The sample showed a blood alcohol content of .199 – over two times the legal limit.

De Mancillas told investigating officers that she was on her way to pick up her children from school nearby.

Officers were able to contact school officials and made arrangements for a family member to pick up the children, the release states.

De Mancillas was then processed and arrested for driving under the influence and felony criminal damage. She was later transported to Yavapai Regional Medical Center for medical clearance. Once cleared from the hospital, she was transported and booked into the Yavapai County jail in Camp Verde.