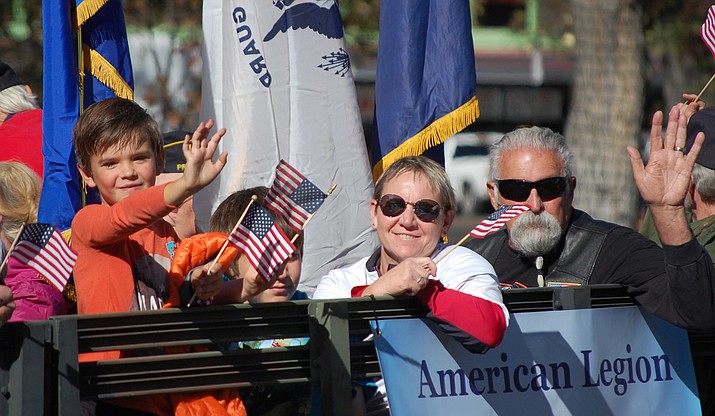 Prescott salutes veterans with a parade each year (pictured is the American Legion entry from 2018), and this year’s Veterans Day Parade will be the largest — with nearly 100 entries downtown on Monday, Nov. 11. This year’s parade theme is: “Honoring Korean War Veterans: Never Forget Their Service.” (Tim Wiederaenders/Courier, file)

In the largest Veterans Day Parade ever in downtown Prescott, nearly 100 entries are expected to take to the streets Monday, Nov. 11.

“That is the most ever,” she said, adding that last year’s parade had 82 entries.

This year’s lineup will include everything from the popular Embry-Riddle Aeronautical University’s ROTC groups to a new entry from the Arizona National Guard to marching bands.

Stacy-Schroeder estimates that the parade annually attracts 2,000 to 4,000 spectators to downtown.

Opening ceremonies will take place at 10:30 a.m. on a stage at the intersection of Cortez and Union streets, with the parade beginning at 11 a.m., and circling the Yavapai County Courthouse plaza area. 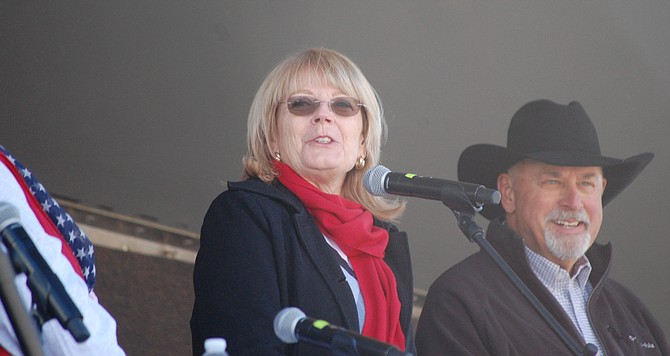 The five grand marshals — all local men in their 80s — include:

• John McKinney, who served as a Staff Sergeant in the U.S. Marine Corps. McKinney, the current commander of the Korean War Veterans Association-H. Edward Reeves Chapter 311, is a Purple Heart recipient who served at the Battle of Heartbreak Ridge. McKinney, 89, has been a resident of Prescott since 2004.

• George Thyden, 88, who retired as a major in the U.S. Marine Corps. He currently serves as the 1st vice commander of the Korean War Veterans Association-H. Edward Reeves Chapter 11. Thyden lives in Chino Valley.

• Jack Palmer, who served as a corporal in the U.S. Marine Corps. Palmer currently serves as 2nd vice commander of the Korean War Veterans Association-H. Edward Reeves Chapter 311. He is a resident of Prescott and is 85.

• Chuck Stohr, 83, who served as a sergeant in the U.S. Marine Corps. He is a past commander of the Korean War Veterans Association-H. Edward Reeves Chapter 11, and is a resident of Prescott.

The parade entries consist of seven categories, including:

Each category will have a first-place winner, and all entries will compete for a best-overall award.

A city news release urges the public to attend the annual parade. “There will be a main stage, and free covered seating for veterans on Cortez Street at Union,” the news release states. “Everyone is invited to attend, and encouraged to wear patriotic colors.”

City of Prescott offices will be closed on Monday in observance of Veterans Day and will reopen at 8 a.m. Tuesday, Nov. 12.

The news release adds that the Solid Waste Division will be collecting residential trash and recyclables on Monday, and commercial routes will also be serviced that day. “Please have your containers curbside by 6 a.m.,” the release adds.