One Stage goes to Narnia 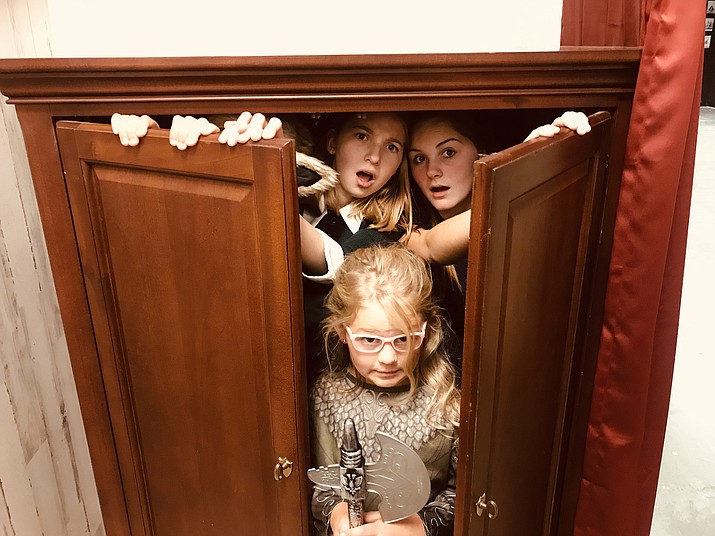 The four Pevensie siblings coming out of the wardrobe that serves as a gateway to Narnia. One Stage Family Theatre is putting on two showings of “Narnia the Musical” at the Elks Theatre and Performing Arts Center Saturday, Nov. 16. (Tamee Niekamp/Courtesy)

One Stage Family Theatre is taking Prescott on a journey through C.S. Lewis’ magical land with its upcoming performances of “Narnia – The Musical.

“It’s a lot of fun, there’s about 45 people in the cast altogether,” said One Stage Family Theatre Director and Producer Tamee Niekamp. “The costuming is going to be really good on this one. It has to be, it’s Narnia.”

Doing the show was the idea of Nolan Sturdevant-Moylan, director and person in charge of marketing for One Stage Family Theatre, Niekamp said. The idea was to do something with family theatre in mind, she said. As such, the ages of those in the cast ranges from 3 years old to someone in their early 60s, and it includes a mom and a dad with their kids and a dad with his kids, she said. It brings it all back to being a play that’s appealing to everybody because everyone knows Narnia and musicals are fun, Niekamp said.

Showtimes are at 2 and 7 p.m. at the Elks Theatre and Performing Arts Center on Saturday Nov. 16. Tickets are $20 for adults and $15 for youth, available online at www.prescottelkstheater.com, by calling 928-777-1370 or at the door one hour prior to the performance.

The stage show pretty much follows the same story as the book, with the brothers and sisters going through the wardrobe to Narnia and having adventures, Niekamp said. It’s one they haven’t seen done in the area, and so far the kids are enjoying it, she said. Some of those with major parts are new to acting, too, Niekamp said.

“Two of our leads have never been in a play before,” she said. “We really took a chance with them, but they auditioned so well.”

One Stage Family Theatre is also preparing for its next show with auditions for “West Side Story” happening at Lessons By Lexe: Dance Studio, 3250 Gateway Blvd Suite 106 at 6 p.m. Sunday, Nov. 17.

One Stage puts on ‘Mamma Mia!’
One Stage puts on West Side Story
It's a Wonderful Life with One Stage Family Theatre
It’s a Hard Knock Life at the Elks this weekend
Do the ‘Time Warp’ again: The Rocky Horror Picture Show
Event Calendar