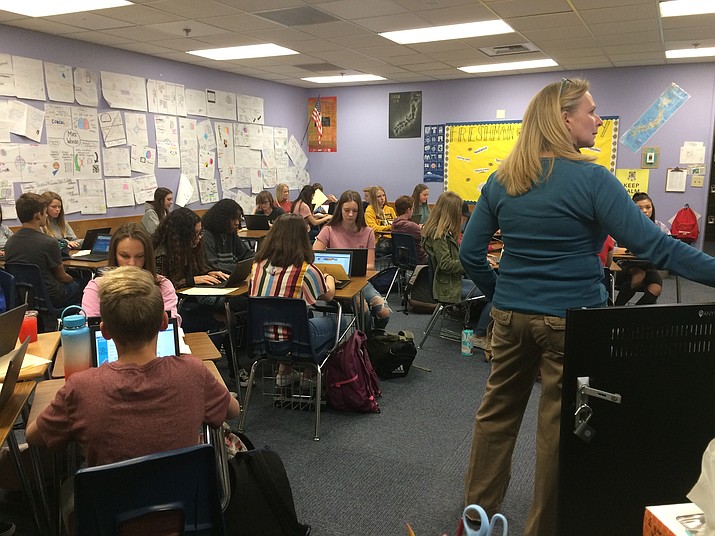 A look inside the Prescott High School freshman academy. Instructor Jennifer Woods is working with students in the inaugural year of the program aimed at orienting freshman to opportunities at the school, and helping them forge a path of success with use of the Naviance technology for college and career readiness. Prescott High scored a B this year, up from a C last year. (Nanci Hutson/Courier) 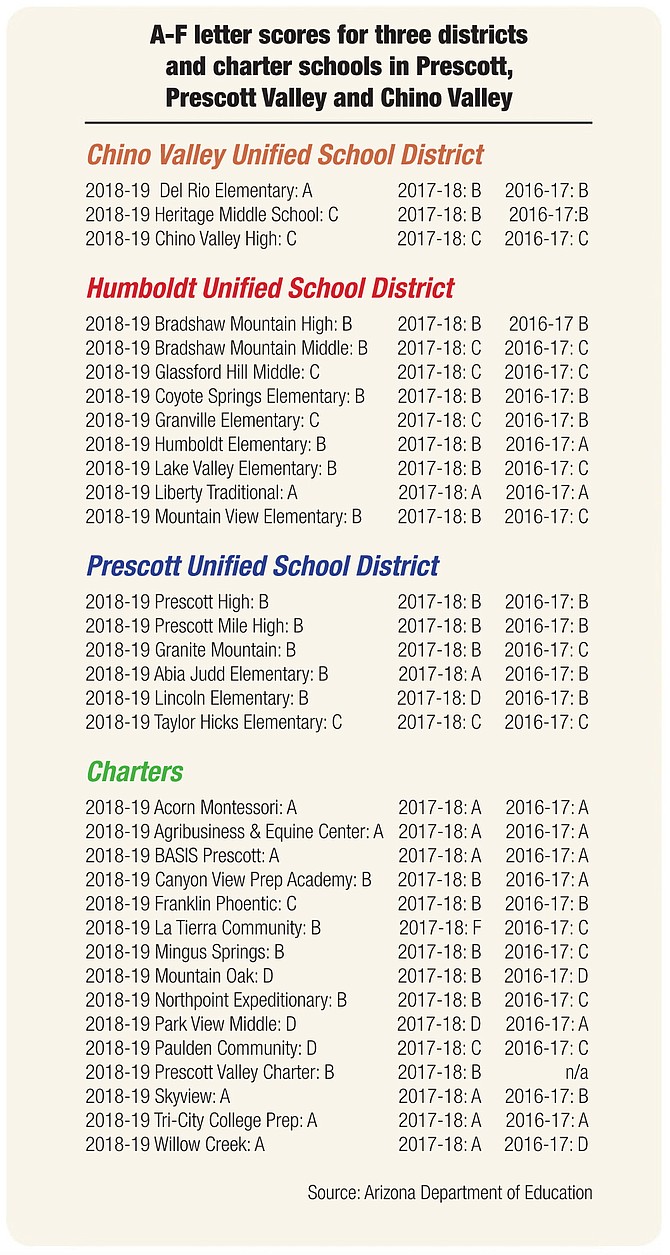 Other than a few exceptions, district and charter school leaders have much to boast about this year with the letter grades received at their schools, with many showing improvement or at least staying steady despite changes in students, faculty and curriculum, and some new test options.

Chino Valley Unified School Superintendent John Scholl said his district is proud Del Rio Elementary earned an A grade, higher than in the two prior years. The grade comes with $200,000 of result-based funding that will allow the school to retain a staff position, invest in some additional technology and offer some additional staff pay incentives, Scholl said.

La Tierra Community School leaders this year were delighted to see their grade jump to a B after the disappointment of an initial failing grade last year.

“That grade didn’t flatten us, it just motivated us more,” said La Tierra Academic Director Rhette Buller of the school that educates about 115 kindergartener through seventh grade students.

The “wonderful school community” rallied together to build upon its foundation with added technology resources and an additional focus on students in need of reading and math interventions, Buller said. Teachers also worked to “demystify” the computerized AZMerit testing process, she noted.

“We’re really happy about the B, but we’re not surprised we jumped so high because we put in the work every day,” Buller said.

Humboldt Unified School District Superintendent Dan Streeter is equally elated with the uptick in scores at seven of its nine schools, particularly as those occurred despite a high percent of low-income students’ eligible for the federal free- and reduced-lunch programs.

“We’re celebrating. We are really proud of the work that is taking place on our campuses,” Streeter said.

Even with the progress, most of these education leaders are far from fans of the letter grade scores. They suggest Arizona review models used in other school districts and charters across the models that elevate the academic bar and push accountability in more meaningful ways.

“The A-F label is a game we have to play,” declared PUSD Superintendent Joe Howard, one of the most vocal critics in the area against the labeling system he considers an insult to public education. “They don’t mean anything. They drive an agenda. And they don’t really give any data.”

Yavapai County Superintendent Tim Carter said he remembers as a student and early educator when there was no state standardized tests or school letter grades. 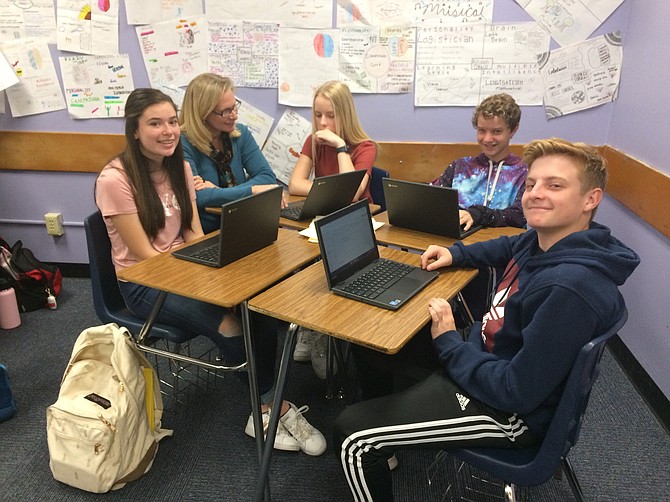 Pictures of Prescott High School freshman academy. Instructor is Jennifer Woods working with students in the inaugural year of the program aimed at orienting freshman to opportunities at the school, and helping them forge a path of success with use of the Naviance technology for college and career readiness. Prescott High scored a B this year, up from a C last year. (Nanci Hutson/Courier)

A former state Board of Education president who served on a committee exploring the A-F system, Carter said he appreciates the state’s desire to have academic standards and a means to track progress. He’s just not sure the A-F grades are the best way.

For these grades to be meaningful, Carter said they need to measure more than a one-time performance on a standardized test. Elementary school scores are based almost solely on state test results, and high school on student test scores, college and career readiness and graduation rates.

Such things as student transportation, career/technical education programs, teacher qualifications and longevity, availability of college scholarships, athletics and other extracurricular activities should also weigh into the big picture, Carter noted.

A-F grades should never be used to compare one school’s students to another because there are too many other factors that go into a student’s academic profile, Carter said.

“People need to keep this whole thing in perspective,” Carter said. “The A-F system needs to be different from the state assessment system.”

“What matters to me, and to most teachers, is how we test kids all year; not some made-up formula-like labels. We use multiple measures to inform instruction on individual students, groups of students and entire schools. And that’s how you do education in the 21st century,” Howard said.

His Chino Valley colleague says the biggest flaw in a system he recognizes was established to instill accountability is that it does not offer a broad picture of total academic performance. He would warn against relying on one grade as “the sole indication of how the school is doing.”

“Regardless of the A-F thing, we are constantly measuring achievement,” Streeter said. “That’s why we have our own assessment system. We’re a data-driven, accountability-driven district.”

Like his colleagues, Streeter said he favors a better state assessment method.

Howard accepts this system is here to stay. He just hopes it can be improved to reflect the “dynamic work” done by so many educators across the region and state.

A sole letter grade “will never represent what schools are doing,” a frustrated Howard surmised. “It diminishes what we do. It is not best practice. It’s a political tool and it’s divisive.”