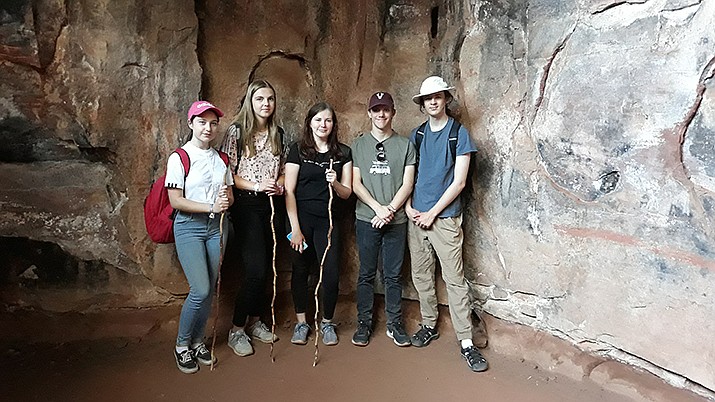 To name a few.

These were some of the top treats students from Prescott’s sister city in Zeitz, Germany said they most enjoyed during their recent 17-day exchange with Prescott High School’s German students.

Seventeen-year-old Zeitz senior Elisa Reinhold said she was awed by the magnificence of nature in Arizona — the vast expanse of the Grand Canyon and the Red Rocks in Sedona. And she finds American food offerings to be very tasty. Her favorites: banana pancakes and curry.

Hosted by her exchange “brother” Eric Ells, Elisa said she felt totally embraced by his family, and enjoyed the “open-minded, friendly” nature of all the teachers and students she encountered at Prescott High.

Though some of their English is spotty, Elisa and her fellow German students agreed that they found that even as teens from another part of the world they were able to communicate with their peer hosts.

Eric, a junior, said he went on the Zeitz exchange trip last summer where he was hosted by Reinhold’s family. He said he appreciated a change to experience a world beyond the city’s borders. 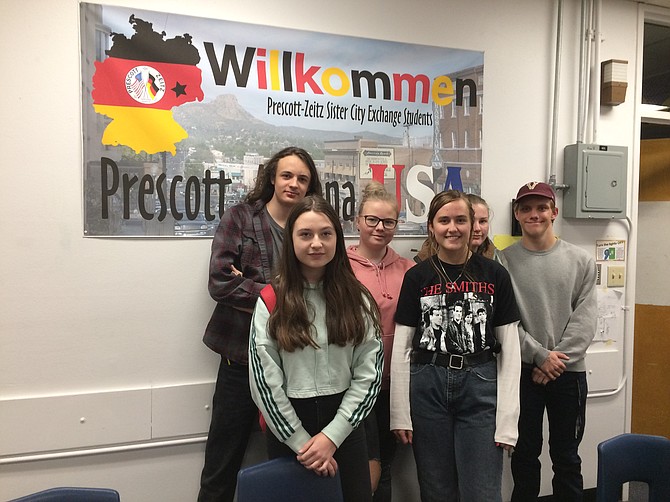 “Personally, I think it makes you more open to others and open to new ideas,” Eric said. “You’re not so much in a box of what you know. You learn about how other people do things.”

Eric said he was eager to have his host “sister” come for a visit so he could show her glimpses of life in America that she might otherwise never experience, like climbing up a sheer rock face cliff in Sedona.

“The nature here is a lot different,” Eric said of the differences between Arizona’s landscape and the ancient city of Zeitz situated on the river White Elster.

Zeitz boasts a baroque-style castle with 10th century crypts and a Gothic Town Hall built in 1509 that was then rebuilt in 1909.

Eric and the other students agree the exchange enabled them to share their lives with their German peers, finding far more similarities than differences between them. Eric and his fellow student hosts delighted in taking their German friends to an assortment of places both in the city and out-of-town.

All said they wanted to ensure their guests “just really had a good experience here.”

As his father, Robert, is the high school German teacher, Jedidiah Ernst has visited Zeitz twice — his father will be again this summer participating in a three-week exchange with about a dozen Prescott High and Bradshaw Mountain High students. The Ernst’s this year hosted Emelie Lange.

For Jedidiah, the Zeitz trips enabled him to gain more knowledge of German culture than he could ever learn from a class lesson or social media.

Some of Jedidiah’s lasting impressions, though, seem to orient around food.

“They have breakfasts like no other. They eat a lot more bread,” he said as other PHS hosts interjected that they have a healthier diet than most Americans. “They also spend more time with family.”

To Robert Ernst, the Zeitz exchange program is an invaluable way for adolescents to stretch their sensibilities. They are pushed to see beyond their own unique perspectives, he said.

“You do see the world differently. You see the news differently; the idea of society,” Ernst said, noting such things as public transportation, day-to-day chores, even the way students are expected to behave in school.

The German students all agreed Prescott High is far less formal than the school environment from which they come. They said they found the classes to be more interactive and “fun.”

In a historical context, Ernst said the American students who travel to Zeitz discover a city that is more than 1,000 years old with villages that date back to 500 A.D.

“A lot of Germany is still medieval,” Ernst said. “That’s hard to imagine.”

Everything from the Zeitz architecture to the residents’ food choices, and general lifestyle, is quite different than the American way of life, Ernst said.

“They are far more active,” he said of the Germans who spend most of their free time hiking, biking and kayaking. “And the food is amazing.”

On each exchange, Ernst said the students and hosts from both countries “compete” to see who can show the other the better time.

All of the students are enriched by the experience when they return home, gaining a new world view rooted in the history and the culture, Ernst said.

“The kids who go on this trip learn differently when they come back,” Ernst concluded.