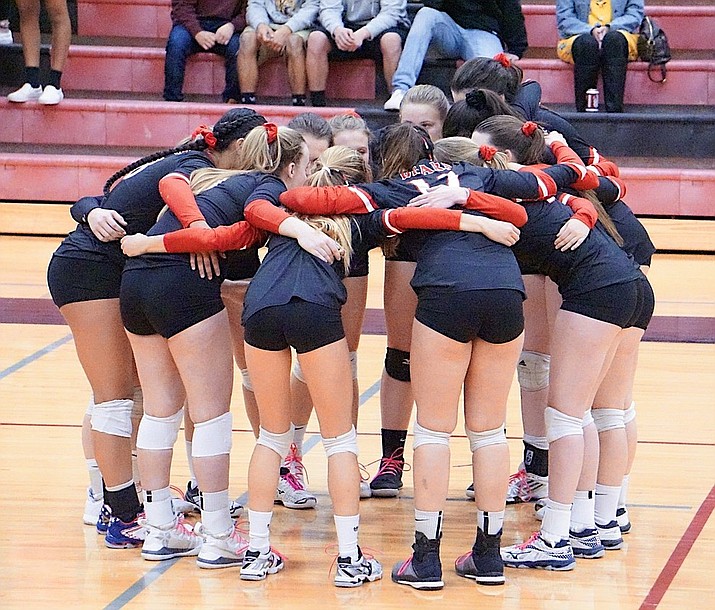 RIGHT: Bradshaw Mountain volleyball huddles up during the team’s 3-1 win over Mesquite in the 4A State Tournament first round on Tuesday, Nov. 5, 2019, at Bradshaw Mountain. (Aaron Valdez/Courier, file)

FLAGSTAFF — Perennial powerhouse No. 3 Flagstaff was the thorn in No. 6 Bradshaw Mountain’s side the entire season. And unfortunately for the Bears, this narrative reached its pinnacle during Thursday night’s state quarterfinal.

During the regular season, the Bears’ only losses in the Grand Canyon Region were to eventual champions Flagstaff. However, both matches went down to the wire and it took five sets each time to decide the winner.

As fate would have it, the two sides met up once again in the 4A state quarterfinals on Tuesday in Flagstaff. These two heavyweights traded blow for blow in this winner-take-all situation but for the third time this season, the Bears ended up on the wrong side of the scoreboard.

The third installment of this rivalry was primed to be an epic clash and being that it lasted five sets, that’s exactly what it was. The first set featured a tight contest as neither team ever led by more than two points

The Eagles held a 21-20 edge late in the first set and managed to claim the 25-22 win by going on a 7-2 run. The second set saw more of the same with both the Bears and Eagles vying for control.

With Flagstaff up 18-17, Bradshaw Mountain kept pushing to grab a lead but both teams eventually found themselves in a 24-24 knot. Not wanting to fall in a 2-0 hole, the Bears rattled off for two critical points to take the set 26-24.

Bradshaw Mountain carried over its momentum into the third set by jumping out to a 14-8 lead. Despite the big run, the Eagles showed their resiliency and went on big run of their own to take a 15-13 lead.

As the Bears’ offense wavered down the stretch of the third set, the Eagles closed it out and won 25-21. Bradshaw Mountain seemed frazzled in the early stages of the fourth but scored seven unanswered points to tie the score at 16.

The match came down another fifth set, where the Eagles have obviously had the Bears’ number this season. And while the Bears fought tooth and nail, they just couldn’t get over the hump and were eliminated when the Eagles got the 15-9 victory.

The seniors came out to play in their final game as a Bear, starting with OH Mailani Manuel, who posted a tremendous double-double with 26 kills and 25 digs. MH Peyton Bradshaw had 14 digs, six kills and three blocks while OH Jordyn Moser recorded 16 digs and 10 kills. S McKell Clifford also dished out 32 assists.

Bradshaw Mountain completed one its most fruitful seasons in program history, compiling an 18-5 overall record and finishing second in the Grand Canyon region. Their first-round victory against Mesquite on Tuesday was the team’s first postseason win in well over a decade.

Flagstaff will move on to the 4A state semifinals on Saturday to take on No. 2 Estrella Foothills.