Editorial: City Council, hot topics ahead; how to build consensus? 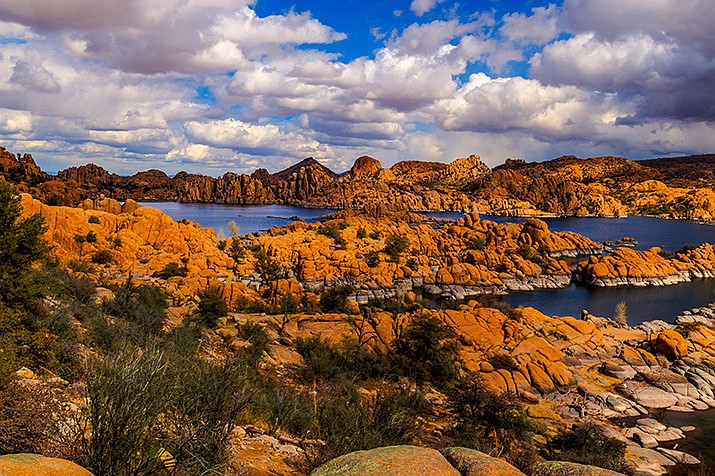 Prescott’s Granite Dells area encompasses a vast patchwork of public and private lands. Over the years, the City of Prescott has bought and preserved the Dells-area Watson and Willow lakes, as well as about 424 acres of Dells open space. The topic of preserving portions of the Dells is expected to come before the city’s boards and council in the coming months. (Courier file)

With the General Election behind us and the anticipated Nov. 19, swearing-in ceremony of the City of Prescott’s council set, three incumbents have been re-elected and a newcomer is set to join the panel of seasoned members.

At the forefront will be controversial topics of water and annexation in policy changes and the Dells, respectively. Tough talk in debate and negotiations on both have been rampant.

While the bulk of the water policy changes will next be aired Nov. 12, before the new council is seated, the most debated portion — providing water outside of the city limits — has been walked back. The delay will give time for more discussion, though the city has conducted multiple hearings on it already.

It is unclear when the Arizona Eco Development (AED) proposal for annexation and development in the Granite Dells will come forward, to either Planning and Zoning or the City Council. Word of still incomplete plans exists, as well as continuing (stalled?) negotiations regarding the number of acres to be set aside.

Toss into the mix the Save the Dells organization’s future-thinking plans for a park and preserve in the area, and concerns involving AED’s proposal as well as a number of other properties.

It will certainly make for interesting stories and headlines as it all unfolds; still, the onus will be on the City Council members to rebuild trust as the city and residents move forward.

A clear understanding of water and other resources, as well as what “growth” looks like and should look like moving ahead is essential.

Will it be possible for the city to build consensus within and with the community?

There will always be people unhappy with what government does. Regardless, we should lay some ground rules — call them expectations — on all sides; otherwise, we will merely see a lot of 5-2 or 4-3 votes coming out of the council chambers.

This — for community — is where the rubber meets the road.