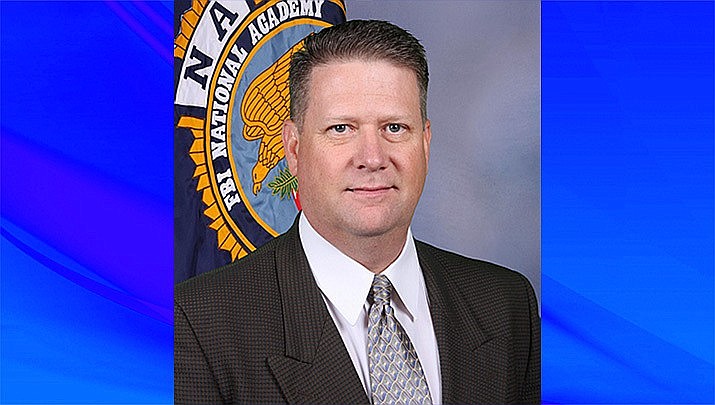 Steven Roser will be sworn in as Prescott Valley’s new police chief when the town council meets Thursday, Nov. 7. (Courtesy)

Steven Roser will be sworn in as Prescott Valley’s new police chief when the town council meets Thursday, Nov. 7.

At 5:30 p.m. inside the public library’s auditorium, 7401 E. Skoog Blvd., Roser makes it official, although he began his tenure here Nov. 4.

Roser replaces Interim Chief James Edelstein, who’s been on the job since June 24. Edelstein was named to the post after former chief, Bryan Jarrell, retired. Jarrell served as police chief for nearly six years, since 2013. Roser becomes Prescott Valley’s fifth chief in the past 16 years.

Prior to his arrival in Prescott Valley, Roser was a shift commander for the Phoenix Police Department. He has 29 years’ experience with Phoenix Police and four years’ active duty in the Air Force as a law enforcement specialist.

“My first impression is that Prescott Valley has an outstanding police department,” Roser stated in a Sept. 18 news release issued by the town. “I’ve heard nothing but positive comments about the department, and the community is very supportive.”

Roser began his law-enforcement career in 1990 as a patrol officer in the South Mountain Precinct in Phoenix.

He later served as a field-training officer, a burglary and metal theft detective, and a narcotics and property investigator, in addition to other duties in drug enforcement and forensic imaging.

Most recently, he was a shift commander assigned to the Infrastructure Protection Unit, Downtown Operation in the Central City Precinct in Phoenix.

A graduate of the FBI National Academy in Quantico, Virginia, Roser earned a bachelor’s in Business Management from Grand Canyon University in Phoenix and a master’s in Administration from Northern Arizona University in Flagstaff.

In other business, the Council plans to:

• Approve a reversionary plat for a new Super Circle K convenience store and gas station at the southeast corner of Glassford Hill Road and Highway 69, which the PV Planning & Zoning Commission ratified during its regular meeting Nov. 4.

The plat calls for a portion of First Street to be abandoned and a new street to be dedicated east of the 5,187-square-foot store. This store will be the third Circle K in a 3-mile stretch of Highway 69 in Prescott Valley, once the small Circle K at Robert Road and 69 closes. The other Circle Ks include the store at 6150 Highway 69 and the new store being built where the former Prescott Valley Motel stood, at 8390 Highway 69.

• Reappoint Guy Brown to the Municipal Property Corporation Board.