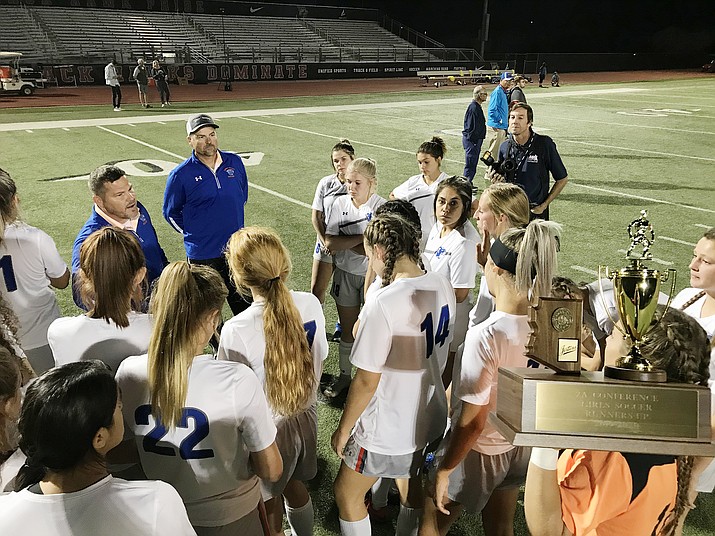 Chino Valley head coach Allen Foster talks to his club after a 2-0 loss in the 2A state championship to Northland Prep. on Saturday, Nov. 2, 2019, in Gilbert. (Brian M. Bergner Jr./Courier)

EDITOR'S NOTE: This story has been updated from a previous version to show that Mia Blair scored the first goal in Saturday's title match.

GILBERT — Third time’s a charm did not apply Saturday night at the 2A state championship for the No. 2-ranked Chino Valley girls soccer team.

And for a third straight year, the Cougars watched in disbelief as a Northland Prep. club from Flagstaff was just good enough to come out on top, this time a 2-0 victory for the Spartans’ third consecutive state title.

“I thought of the three we’ve given up, this is the game that we were in and played them most competitive,” Chino Valley head coach Allen Foster said, adding that after an early goal by Spartans forward Mia Blair in the 12th minute, both clubs played evenly down the stretch.

“We didn’t win a ball out of the air and it didn’t fall our way [on the goal]. From then on it was a 50-50 game, we had some opportunities we didn’t finish,” Foster said. “If the ball bounces a couple different ways, it’s a 2-2 game. But, props to Northland Prep., they show up ready to play every year, so we’ll get back to work.”

“It’s just gratifying. We worked super hard this season, and Chino Valley put up a huge fight,” Karren said. “It was a tough game, but I’m happing with the outcome and how we played.”

Karren said even with a 2-0 lead, Northland Prep. wasn’t going to let up.

“[Chino Valley is] still always dangerous, they play us well and have a good attack,” Karren said. “Having that 2-0 lead … we can all settle down and play our game.”

Northland Prep. scored at least eight goals in 15 of the 18 matches they played this season, outscoring their opponents 145-10 including Saturday’s title win.

Chino Valley (16-3, 3-1 Central) is the only club to come close to beating them, losing a 5-3 double-overtime thriller to the Spartans on Sept. 26.

The only other match Northland Prep. didn’t score at least eight goals was Sept. 6 against Blue Ridge in a 6-0 win.