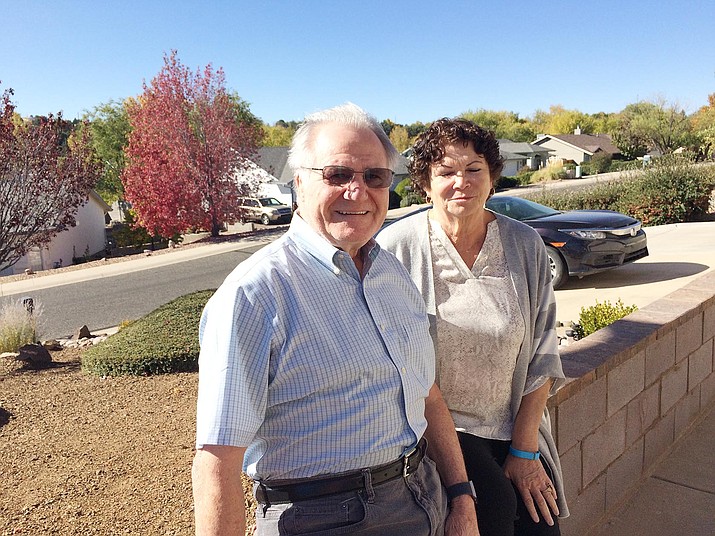 On Thanksgiving Day, a Prescott veteran and retired U.S. Postal worker will travel to just outside Ashville, North Carolina, to celebrate the American holiday with blood relatives for the first time in his 72 years.

All thanks to a DNA test kit.

Prior to “spitting and sending” his DNA off as a genealogical experiment just over a month ago, Patrick Lilly thought he was an only child.

The Vietnam veteran and retired Post Office electrician technician was just 4 years old when his now 90-year-old German war bride mother divorced his American soldier father John Charles Lilly, now deceased, and sent him to live with his paternal grandparents in the Alsace-Lorraine section of France. Lilly had no siblings, and he and his wife of 33 years, Judith, suffering now with Alzheimer’s disease, never had their own children. 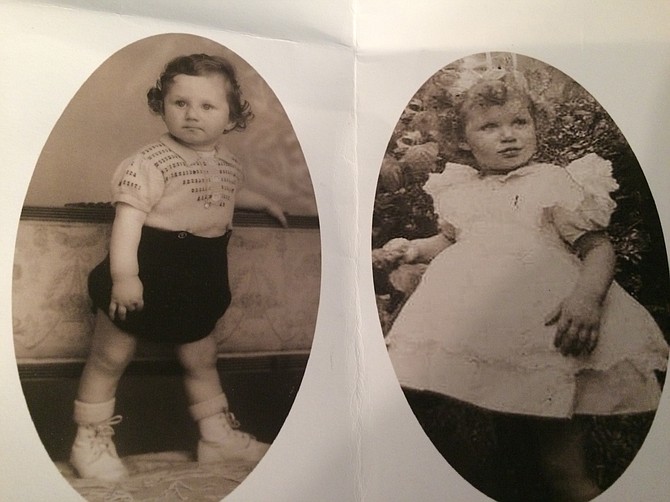 On left is Patrick Lilly as a toddler; similar age photo of Kathleen Bischoff on right. (Courtesy)

So to learn he had a sister three years younger than him born to his mother, Jacqueline, out of wedlock in New York City, was beyond a shock.

“It’s surreal. After 72 years to find I have a sister,” Lilly said. “I didn’t know what it was like to be in a family because I was always on my own. I only knew how to spell the word s-i-s-t-e-r; it was just a word in the dictionary.”

Until Oct. 23 when his sister, Kathleen Bischoff, 69, now of Pompano Beach, Florida, arrived at Sky Harbor International in Phoenix for a quick, two-day visit.

“There were a lot of emotions. Wow!” said Lilly during an interview the day after he and his newfound sister reunited at his Prescott home. “I did a lot of crying … Now I’m an uncle and a great uncle.”

Bischoff, a widow with two adult children and one grandson, was adopted by the brother and wife of her birth mother’s maternity nurse; Paul and Madeline Medunic, both now deceased. Bischoff was raised outside Philadelphia, Pennsylvania, with four younger siblings born to her parents. 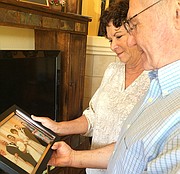 Patrick Lilly, 72, brother, reunited in Prescott with his sister, Kathleen Bischoff, 69, of Pompano Beach, Florida, looking at photos of Bischoff’s family that Lilly will meet at Thanksgiving in North Carolina. (Nanci Hutson/Courier)

Unlike Lilly, Bischoff knew from the time she was a young teen she had a birth older half-brother somewhere — and for more than a half century she has carried a single, signed photograph of her birth mother as a teenager tucked inside her wallet. She, too, has a pair of her birth mother’s earrings that her adopted parents were instructed to give her on her 17th birthday.

Lilly matched his mother’s signature to the one on his sister’s photograph that reads, “Remember always, Jacky.” They are identical.

For Lilly, though, what is most uncanny is Bischoff’s appearance. She bears a remarkable resemblance to their mother who they intend to go and visit in France next spring. He recognized her immediately as she approached him in the airport terminal.

Despite curiosity about her birth lineage, Bischoff didn’t know how to pursue the matter until her daughter presented her with a DNA kit as a Christmas gift last year. Their DNA tests proved a 99% sibling match.

“Fate,” said a teary-eyed Bischoff as she shared photo albums and timelines with her brother at his kitchen table.

Both were forced from time-to-time to reach for a Kleenex.

The one thing the two siblings agreed on was that from the moment they talked on the phone, after Bischoff received Lilly’s email, they were connected at the heart.

“We spoke for an hour-and-a-half and it was so easy,” Bischoff said. “It was like we’d always known each other.”

“I loved her just like that, and I we hadn’t even met,” Lilly said of their first phone call. “And I liked her son and daughter just from the sounds of their voices on the phone.”

So what have they learned about each other?

Lilly was something of an incorrigible teenager. In 1962, he was shipped off to the Florida Air Academy College before he went to Parks College and then St. Louis University where he did not perform well.

He left school in 1965 and enlisted in the U.S. Army in 1966. He served in Vietnam from 1968 to 1969 — at one point he was injured and accidentally listed as Killed In Action. He then returned to college, attending Daniel Webster College in New Hampshire.

He went back into the Army from 1973 to 1977 and served on a bomb squad in South America. He earned the rank of sergeant before he was discharged in San Diego. It was there he started his career with the Postal Service.

From hearing her brother’s life story, Bischoff said she felt she got the better end of the deal. She grew up surrounded by a loving family that remains connected to this day. She earned a bachelor’s degree in education from Pennsylvania State University, but taught for only a short time before she opted to work in restaurants and in retail.

The only unfinished business in her life was finding her long-lost brother, she said.

“Now I have relative in the United States and in France,” she said as tears streamed down her cheeks.

“It’s an emotional rollercoaster,” Lilly said as the two conversed. “Surreal is the only word I can think of to described how I feel. It’s a shame my wife can’t share in this.”

“We have laughed and cried a lot, and shared lots of stories,” Lilly said as his sister joked with the tree-cat owner over his feline affection.

A decade-long volunteer with the Yavapai Humane Society, Lilly has been affectionately referred to as the “Cat Whisperer.”

“This is why people should test their DNA,” Lilly said of his quickly expanding family. “I’m glad I did it.”

“So am I,” Bischoff concluded.