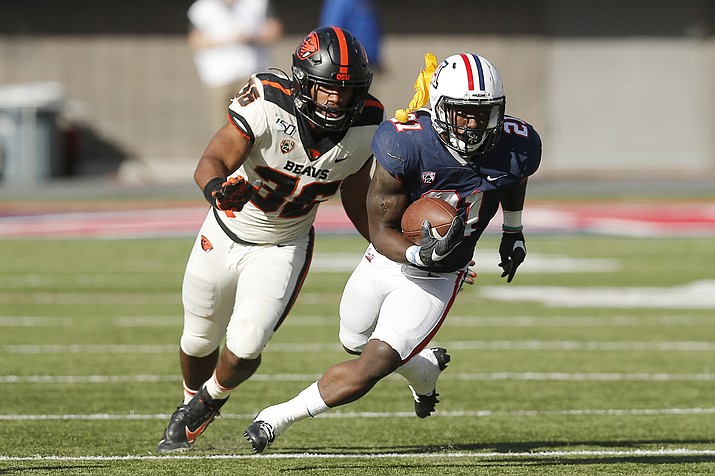 Arizona’s J.J. Taylor (21) runs away from Oregon State linebacker Omar Speights (36) as a referee’s’ flag hits him in the shoulder pads in the first half during a football game, Saturday, Nov. 2, 2019, in Tucson. (Rick Scuteri/AP)

TUCSON — Oregon State went into its bye week looking for ways to exploit the many holes in Arizona’s defense.

When the Wildcats switched coordinators this week, the Beavers didn’t change anything — and still blew right through them.

“New D coordinator, what’s that going to look like and we just looked at the tape, focused on what we do well,” Beavers head coach Jonathan Smith said.

The coordinator change changed little on the field.

Oregon State (4-4, 3-2) manhandled the Wildcats up front while churning out big plays, scoring 35 points by halftime and racking up 572 total yards.

Luton finished 20 of 26 and threw two TD passes to Isaiah Hodges, who had seven catches for 150 yards.

Grant Gunnell threw for 269 yards and two touchdowns for the Wildcats, who have lost four straight.

Luton hit Hodges on a 21-yard TD pass on the Beavers’ opening drive and a wide-open Noah Togiai for a 23-yard score to close the first half. Jefferson scored on TD runs of 1 and 5 yards, and Artavis Pierce added a 4-yard TD run.

Jefferson scored on 5-yard run to open the second half and Luton’s 25-yard TD pass to Hodges put the Beavers up 49-31 in the fourth quarter.

“I think we knew what was possible and it’s all coming together,” Oregon State tackle Blake Brandel said.

Gunnell found Gary Brightwell on a swing pass that turned into a 38-yard touchdown with the help of a key block by receiver Cedric Peterson.

J.J. Taylor scored on a 3-yard run to cap a drive pushed along by four Oregon State personal foul penalties — two each for facemask and roughing the passer.

Arizona twice had to settle for field goals after driving inside the Beavers’ 10-yard line, the first after Taylor had a TD run negated by a holding call.

Peterson turned a short pass over the middle into a winding 35-yard touchdown early in the third quarter and Brightwell scored on a 10-yard run.

Taylor added a 2-yard TD run in the fourth quarter to pull the Wildcats with 49-38, but Oregon State continued to gouge their defense to put it away.

“When stuff like this happens, a lot of people point fingers, but we can’t do that,” Taylor said. “We’ve got to stay being us, remind us of what kind of team we are and work together.”

Oregon State has built some momentum in the second half of the season, now needing two wins to become bowl eligible for the first time since 2013.

Arizona’s defense is in disarray, leaving the Wildcats spiraling away from bowl contention after opening the season 4-1.

The Beavers had 12 penalties for 120 yards, including three on facemasks.

“We extended some drives for them and that’s a good offense,” Smith said. “You just don’t play with fire, helping them that way.”

With Arizona trailing by 18 in the fourth quarter, Taylor took a handoff to the right, bowled over one defender and buried his head into another.

The hard running, even with the game out of reach, is exactly what the Wildcats expect from one of their team leaders.

Taylor finished with 78 yards on 21 carries and had seven catches for 89 more yards.