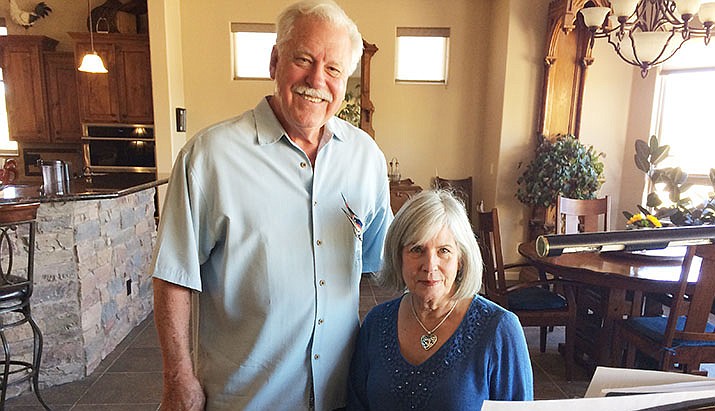 Prescott Chorale Artistic Director Dennis Houser and wife, Kay, the chorale’s accompanist, are shepherding the Ruth Street Theater Project to refurbish the medium-sized venue into a professional space for both school and community performances. (Nanci Hutson/Courier)

He performed his first solo when he was a kindergartner.

The professional performer, music educator, and hobby horseman, is equally talented when it comes to generating money to benefit children.

The founder and artistic director for the Prescott Chorale, and music director for St. Luke’s Episcopal Church in Prescott, Houser enjoyed a three-decade career in school project fund development with Reader’s Digest. In those years, Houser was able to shepherd the generosity of donors to the tune of $15 million dollars.

So it seems he is the perfect guy to elevate Prescott High School’s Ruth Street Theater into a true community gem. Houser is the project director and founding board member of the new Ruth Street Theater Project, one endorsed and supported by school district leaders and a group of local performing artists.

Houser expects it might take up to $1 million to get the whole job done.

First, though, Houser and his life accompanist, Kay, a retired oncologist/pilot accountant who is also a talented vocalist, pianist and organist, want people to fall in love with the centrally-located venue that has captured their hearts. Then they believe it will be an easier task to generate dollars for what they see as a treasured performing venue suitable for the community and schools of their adopted hometown. The couple moved to Prescott in 2011.

On Feb. 8, the Ruth Street Theater Project will host a gala with performances from the Prescott Chorale, Prescott High School Choir, the Prescott High jazz band and a local group, Jazzy. This will be the first public opportunity to share the project’s vision.

“But we’re not going to ask for a penny beyond the ticket price (still to be determined),” Houser said.

After the gala, the group wants to embark on a regular concert and performing art series to entice more people to support what will become an ongoing range of renovations – from a main seating area restructure to soundproofing and backstage building and storage space. A new lobby with a “coffee bar” is also on the wish list.

Kay Houser said the project evolved after the couple started scouting places suitable for the Prescott Chorale. St. Luke’s has been its home for five years, but it has outgrown the space. They needed an affordable location with good acoustics and parking for their patrons.

Ruth Street fit the bill. But the Housers saw the opportunity to do even more.

Though the school district built the theater, the district has limited resources. In the last few years, it has invested some $70,000 in safety upgrades. It does not, however, have the capital for a broader restoration, Houser said.

Together with the support of a strong local group of local artists, educators and business folks who have joined the board, the Housers see a chance to leave a legacy.

“We want to do something for more than just ourselves,” Kay Houser concluded.