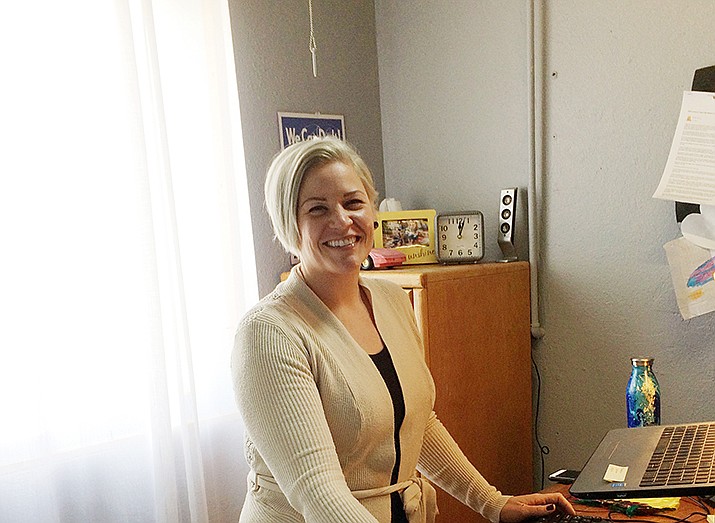 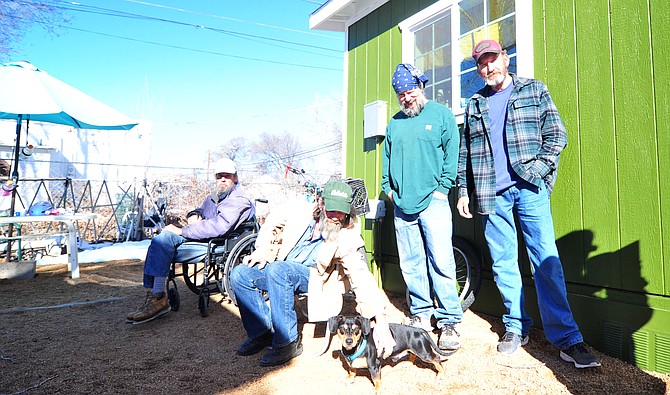 CCI opened a large, outdoor shelter on the grounds of its then-thrift store location on Fair Street. (Courtesy)

Nor is he surprised the nomination comes from yet another non-profit agency brokering private/public partnerships to house homeless veterans.

These two agencies — Coalition for Compassion and Justice and U.S. VETS Prescott — have emerged as leaders in the movement to move from emergency shelter and services toward permanent, supportive housing that promotes the dignity of self-sufficiency.

The Arizona Housing Coalition honored CCJ at its state conference this week with its Innovations in Housing Award. CCJ was nominated by U.S. VETS.

The 600-attendance conference is the premiere training and networking event for public and non-profit agencies those involved in providing affordable housing and homeless services.

“Our selection committee, representing affordable housing and homelessness services throughout Arizona, chose CCJ for this award based on their track record of building partnerships and creative funding strategies for their housing models. They are the embodiment of innovative practices in our state and industry,” said Coalition Executive Director Joan Serviss.

Mengarelli said he appreciates the leaders of these agencies — CCJ Executive Director Jessi Hans and U.S. Executive Director Carole Benedict — because they are solution seekers. They are not trying to make Prescott a homeless mecca.

“I’m very pleased with the kinds of resources we have in the city, and the leadership we have leading those efforts,” Mengarelli said. “It’s an interesting dilemma because we want these guys to do great work, but we also don’t want to be a magnet for the homeless.”

In January, U.S. VETS is scheduled to open its $8 million, four-building new housing and headquarters complex on Whipple Street. The public/private funding partnership will offer 150 units of housing, including its existing 76 units of transitional living, 15 transition-in-place units and some 60 studio apartments. Benedict, too, is seeking additional grant funding to transform its current space on Gurley Street into an assisted-living style housing facility for aging veterans.

In speaking to Hans and Benedict, Mengarelli said he appreciates that they neither condone nor promote “that kind of migration.”

Rather these agencies are striving to care for the “marginalized” in the community’s midst who deserve a helping hand without welcoming those from other places where such services are not provided, he said.

“It’s easy to say and not always easy to execute,” Mengarelli said.

CCJ has earned accolades over the course of the last two years for its novel efforts that move even the chronic homeless out of emergency shelter into their own homes, be it a renovated R V trailer, a one-room cottage, or into one of two soon-to-open donated community homes for four to six adults.

The latter project, with a second and possibly a third, scheduled for completion at the first of the year were made possible through a partnership with Dorn Homes and other donors and area businesses.

Those followed considerable community criticism when CCJ opened a large, outdoor shelter — some in town referred to it as a “tent city” — on the grounds of its then-thrift store location on Fair Street.

At the time, CCJ and fellow non-profit leaders, including U.S. VETS, said the “Safe Legal Sleep,” project opened eyes to the reality of the area’s homeless issue. CCJ and its supporters used it as the catalyst for change.

The agency was donated a new headquarters on Madison Avenue where it relocated its shelter. At its peak attendance, the shelter served up to 55 men and women, and pets. The shelter now averages 28 a night. CCJ’s goal is to eventually be a shelter strictly for limited emergencies.

CCJ’s latest proposal is to buy or seek a donation of land suitable as a campground with on-site sanitary facilities, and maybe a communal kitchen area. The CCJ-supervised camp would be for 20 to 30 individuals who prefer tents and campers to more traditional brick-and-mortar homes.

“It’s a well-known fact that there is an affordable housing crisis across the United States, making access to housing a near impossibility for our most vulnerable citizens,” Benedict said. “Because they (CCJ) are doing it their way, and without any subsidies, they’ll be able to house people much more quickly, many of whom would otherwise remain homeless and on long waiting lists for subsidized housing … They have harnessed the three C’s; creativity, community, and connection, to create a broad spectrum of housing that will be accessible and feasible to maintain for many of our citizens,” she concluded.