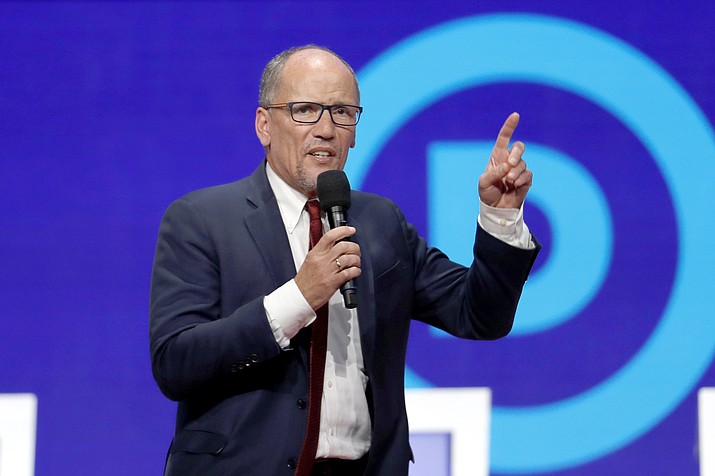 In this Tuesday, Oct. 15, 2019, file photo, Tom Perez speaks before a Democratic presidential primary debate hosted by CNN/New York Times at Otterbein University, in Westerville, Ohio. The Democratic National Committee is increasing pressure on its presidential candidates to commit to campaign actively for the party's nominee in 2020. The unity push from Chairman Perez is part of a wide-ranging voter outreach strategy designed to prevent the mistakes that cost Democrats the 2016 presidential election. (AP Photo/John Minchillo, File)

The Democratic National Committee is increasing pressure on its presidential candidates to commit to campaign actively for the party's nominee in 2020, going beyond a previous loyalty pledge for White House hopefuls.

The push from Chairman Tom Perez is part of a wide-ranging strategy designed to prevent the mistakes that cost Democrats the 2016 presidential election. It comes as the Republican National Committee continues to dwarf the Democratic Party in fundraising, while Democrats face the prospect of a bruising, expensive nominating fight that could last well into election year.

"We'll need every Democrat working together in order to defeat Donald Trump," Perez said, repeating his pledge for a full national campaign even as most Democrats remain focused on the primary campaign.

As an example, the DNC holds up former President Barack Obama, who is already raising money and remains neutral in a nominating fight that includes his vice president, Joe Biden, and who is already raising money for the party. An Oct. 25 email from Obama to grassroots donors produced the party's best online fundraising day of the cycle, the DNC said, and the former president will headline a fundraising gala in California in November.

DNC officials say Obama has already talked with party leaders about campaigning on behalf of the nominee, whoever it is.

Perez is asking all candidates to commit, like Obama, to serve as surrogates, with a focus on battleground states in the weeks after the July 13-16 nominating convention in Milwaukee. And Perez wants each campaign, as candidates drop out, to designate a senior adviser to serve as a liaison to help the national party use the vestiges of individual candidates' campaigns to build out Democrats' general election campaign.

DNC officials say the effort isn't targeted at any campaign. But since President Donald Trump's 2016 election, Democratic power players have lamented the bitterness that lingered among many supporters of Bernie Sanders after he lost the nomination to Hillary Clinton. Sanders endorsed and campaigned for Clinton, but some of his supporters never fully embraced her candidacy, and some Clinton loyalists blamed them for her narrow losses in key states like Wisconsin, Michigan and Pennsylvania.

The 2020 campaign so far hasn't had the same kind of deep-seated tensions, but there have been moments, mostly driven by longshot candidates.

Tulsi Gabbard has been highly critical of the Democratic establishment, recently getting into a Twitter fight with Clinton. Eric Swalwell, who's already dropped out, and Julián Castro, who lingers well back in the polls, have directly and indirectly suggested that the 76-year-old Joe Biden isn't up to the job. And several more moderate candidates have hammered Sanders' and Elizabeth Warren's domestic policy agenda as too far left, with John Delaney essentially casting the senators as socialists.

DNC officials say the overall purpose of what Perez calls a "unity effort" is to pool all Democratic resources, making them available to state parties in battleground states to benefit the presidential nominee and all other Democrats running for lower offices.

Perez already has required candidates to pledge explicitly to support the nominee. Candidates also have been asked to help the party raise money and, as a condition of getting the DNC's national voter file, pledge to give back the additional data they gather on voters once they drop out of the presidential race.

The DNC says 10 candidates to date have sent fundraising emails and 15 have participated in fundraising events. That list includes Warren, who has shunned high-dollar fundraisers for her own campaign but agreed to help the party with events that include wealthy donors who legally can give the party hundreds of thousands of dollars.

Sanders, Warren's chief rival for the Democrats' progressive faction, has sent a fundraising email but hasn't yet hosted a DNC fundraiser. Sanders' campaign says he is willing to attend such events provided they are open to low-dollar donors. Both Sanders and Warren have criticized Biden for leaning on wealthy donors and accepting the help of an independent political action committee that can accept unlimited contributions from individuals and corporations.

The data requirements, meanwhile, are part of Democrats' attempts to catch up to a Republican data operation that surprised the Clinton campaign in 2016 and to avoid the scenario under Obama, whose campaign ran its own sophisticated data operation but never fully integrated it with the party. Sanders also never turned over his voter data after ending his 2016 bid.