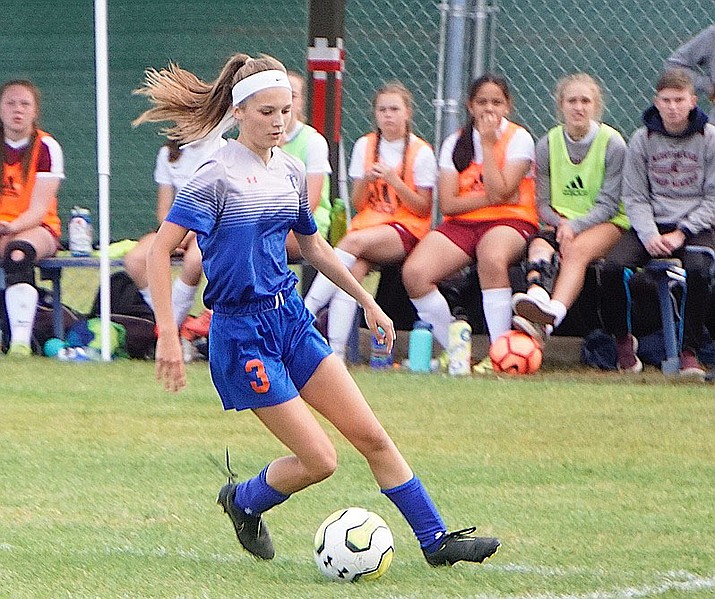 Chino Valley’s Madison Foster (3) dribbles the ball up field as the Cougars take on Northland Prep. on Sept. 26, 2019, in Chino Valley. Foster scored a goal in a 3-1 win over Blue Ridge in the 2A state semifinals Friday, Nov. 1, 2019, in Gilbert. Chino Valley will play Northland Prep. for the title Saturday, kickoff is set for 6:30 p.m. (Aaron Valdez/Courier, file)

GILBERT — Madison Foster, Lindsey tenBerge and Hannah West each scored a goal and the No. 2-ranked Chino Valley girls soccer team beat Blue Ridge 3-1 on Friday afternoon to advance to the 2A state finals.

“We played stifling defense this time around,” Chino Valley head coach Allen Foster said, adding his players didn’t get nervous when the Yellowjackets scored in the first 10 minutes of Friday’s contest to make it 1-0.

It will be the fourth straight 2A state finals appearance for the Cougars, which lost to Northland Prep. 3-1 in 2017 and 2018. Chino Valley beat Round Valley 1-0 in 2016 for the program’s first title.

Chino Valley will face the Spartans again in the finals Saturday at Williams Field High School after they beat St. Johns 9-0 in the other state semifinal Friday night.

Northland Prep. beat the Cougars 5-3 in a two-overtime thriller earlier this season on Sept. 26.

Kickoff between the two clubs is set for 6:30 p.m. Saturday.