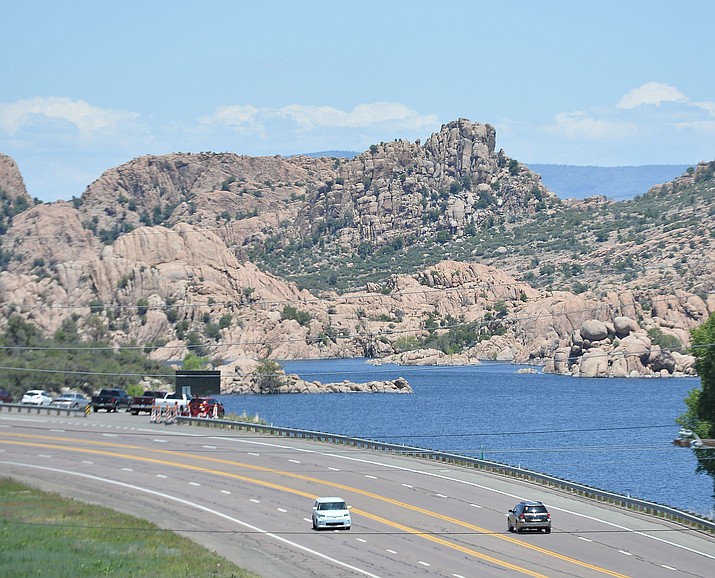 Watson Lake from west of Highway 89 on Friday, May 31, 2019. The Fourth of July fireworks will be held at Watson Lake, which could cause the City of Prescott to close Highway 89 between Prescott Lakes Parkway and the Willow Lake Road roundabout for up to 10 hours on July 4. (Les Stukenberg/Courier)

After wildfire danger caused the cancellation of Prescott’s downtown fireworks displays in two of the past three years, the city decided in March to move the celebration to Watson Lake for July 2019.

To do that safely, however, city staffers must deal with the busy traffic along Highway 89.

Recreation Services Director Joe Baynes said that likely will mean closing down the highway throughout the afternoon and evening of the 4th.

During a presentation to the Prescott Parks and Recreation Board on Thursday, May 30, Baynes said, “The biggest thing, the most complex thing, is how do you manage the traffic?”

Complicating that is the uncertainty about the number of people who will want to attend. “Are you going to have 3,000 people, or 10,000?” Baynes said, adding, “The most important thing about this first year is to get it right.”

After consulting with the city’s police and fire departments, he said, staff has determined that to get it right, the five-lane highway should be shut down during the event, with traffic detoured around it.

Prescott Police Lt. Corey Kasun said the city sees the highway closure as the best option for the overall flow of traffic.

He pointed out that the closure would keep the highway lanes open for emergency access, as well as eliminating congestion that likely would develop on the highway during the fireworks show.

In addition, Kasun said the closure would improve the flow of traffic at the Willow Lake roundabout as vehicles are trying to get in and out of the Watson Lake entrance.

Although the situation is still “fluid” and could change, Kasun said the current plans have the highway being closed from about noon to 10 p.m. July 4, between the Prescott Lakes Parkway intersection and the Willow Lake roundabout.

The city will publicize the available detour routes closer to July 4, Baynes said. To alert drivers approaching Prescott on highways 69 and 89, he said message boards would be placed at strategic locations along the route.

Parking spaces are available at Watson Lake for about 1,500 vehicles, Baynes said. At some point during the day of July 4, the city will let the public know that the lake parking is full.

In addition, the city will provide shuttles from Pioneer Park. “We want to push people to the shuttle,” Baynes told the board, noting that the transportation option would drop people off right at the event site.

As with the city’s previous fireworks locations, a number of nearby parking options will offer viewpoints for the fireworks. For instance, Baynes said, spots along Prescott Lakes Parkway likely will provide good views of the show.

The city has long grappled with fire danger during the week of July 4, which is often before the start of the summer monsoons. Most years, a question arises on whether to proceed with the fireworks show.

After the cancellation last year, the city looked for a new, lower risk venue, and Watson Lake emerged as the choice.

With the fireworks being staged on a barge in the middle of the lake, Baynes said, “The water becomes the (fire) fallout zone.”

For the past three years, Prescott’s July 4 plans have involved shooting fireworks off from the roof of the downtown parking garage, but dry conditions caused cancellations for the past two years.

Prior to moving the celebration downtown, the city conducted an annual daylong celebration at Pioneer Park.