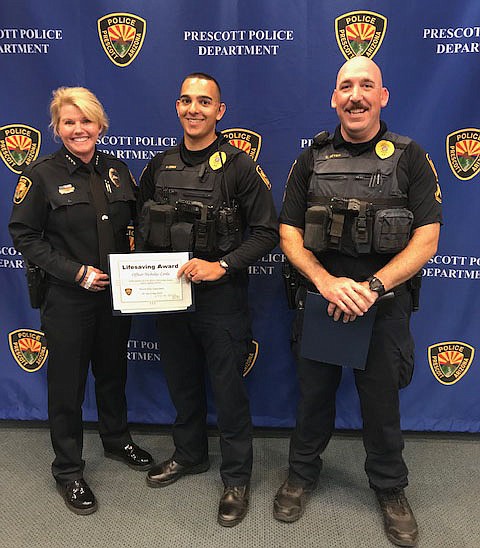 On the morning of April 4, 2019, Beyea and Cerda were dispatched to a residence in Prescott due to report of a 74-year-old man with an apparent accidental gunshot wound to his upper thigh, according to a PPD news release.

The officers found the victim lying in the living room of the residence, bleeding heavily from the wound, the release states. Beyea quickly applied direct pressure to the wound while Cerda retrieved a tourniquet from his medical kit.

When he got to the medical center, he was immediately assessed by their trauma team and was deemed to be stable “in large part due to the application of the tourniquet,” Trauma Medical Director Joseph Sucher told officers. “We have no doubt that due to the nature of injury and the medication the patient was on, that the application of the tourniquet was a lifesaving measure.”

“All Prescott Police Officers are equipped with Individual First Aid Kits and trained on the proper application of tourniquets,” PPD spokesperson Corey Kasun said. “We are extremely proud of both Officer Beyea and Officer Cerda for their quick thinking and lifesaving actions during the course of this incident.”