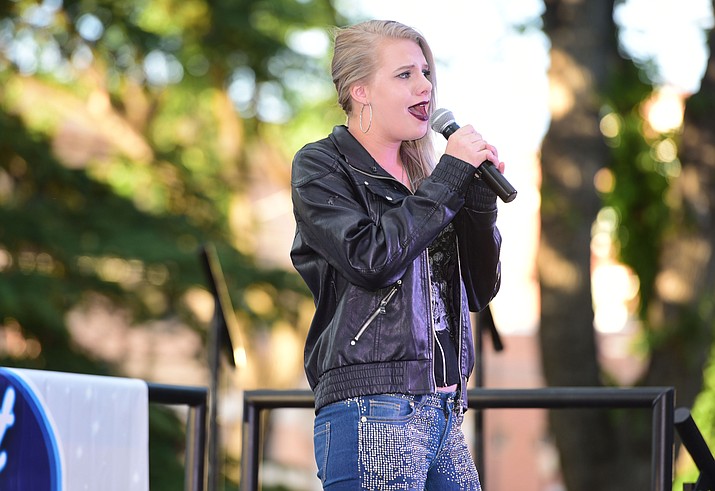 Isabella Martin sings "I Dreamed a Dream" during the first round of Prescott Idol 2017, on the courthouse plaza in downtown Prescott. (Les Stukenberg/Courier, file)

Going downtown almost any day of the week this summer will mean running into some form of entertainment, whether it’s music or movies, thanks to the 2019 Summer Concert & Movie Series.

Though it has the same number of dates that the series had last year, it’s going to be a little different in 2019, Prescott Downtown Partnership Executive Director Kendall Jaspers said, adding that, for one, the name of the singing competition has changed because of naming rights.

Every third Thursday is a performance by the Central Arizona Concert band at 7 p.m. beginning Thursday, June 20.

On Tuesdays at 6:30 p.m. is Jazz on the Square and includes appearances by the Goodwin Street Gang, Mint, the Northern Arizona Big Band, the Mike Vax Quintet, Steve Annibale, and Scandalous Trio and Friends.

There are six Friday concerts that see the likes of Five in the Wheel, Xtra Ticket, Scandalous Hands, Road One South, Toucan Eddy and The CheekTones.

Movies at the Elks are at 7 p.m. on Wednesdays at the Elks Theatre and Performing Arts Center, 117 E. Gurley St. The first movie, “Wall-E” is Wednesday, June 5. “Only the Brave,” “Junior Bonner,” “Labyrinth,” “The Big Lebowski,” “Harry Potter and the Sorcerer’s Stone,” “Somewhere in Time,” “Tombstone,” “Jaws,” “Pretty in Pink” and “Steel Magnolias” also are on the schedule.

The June lineup for the Prescott Summer Concert Series. For the full schedule, visit prescottconcertseries.com/full-concert-schedule.

Admission for the concerts is free, and admission to movies at the Elks is a cash donation of any amount.

The Summer Concert & Movie Series is one of the most important programs Prescott Downtown Partnership Deals with, Jaspers said, noting he enjoys it because it is local.

“It’s primarily local folks coming downtown,” he said. “We get out-of-town visitors and they like it, but it’s fun to do something downtown for people who live here.”

For more information and a full schedule, visit www.prescottconcertseries.com.