Republican lawmakers give final approval for $11.8B state budget
Senate President Karen Fann: ‘This is a pretty amazing budget’ 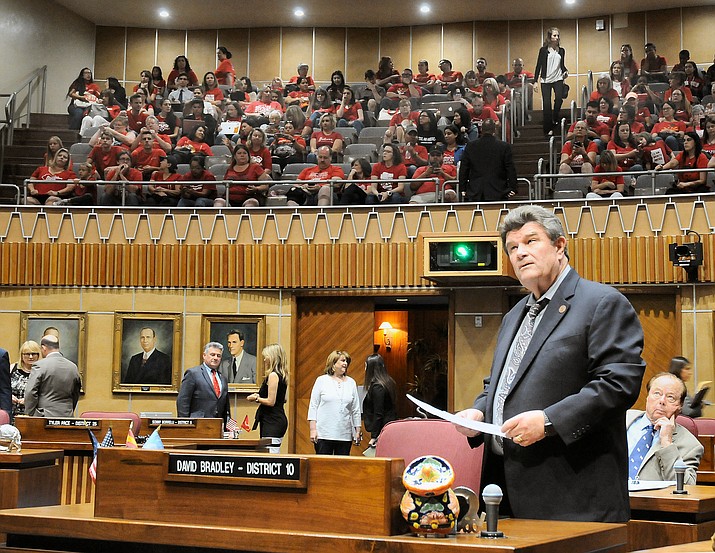 “This is a pretty amazing budget,’’ boasted Senate President Karen Fann, R-Prescott. And she argued that much of what is in the spending plan are priorities suggested by Democrats.

“We know that there will never be enough money to fix everything and address every single thing,’’ she said. “But we believe this is a prudent budget that spends wisely that takes care of all of our Arizona residents to the best that we possibly can at this point.’’

Sen. Tony Navarrete, D-Phoenix, pointed out that the state has yet to restore the aid it used to provide to Maricopa and Pima community colleges. The result, he said, is placing additional burdens on students who choose those colleges because they are supposed to be more affordable than the state universities.

For Martin Quezada, D-Glendale, one big flaw is the “results-based funding’’ formula which he said gives extra money to schools where students already are doing well rather than targeting those where students are struggling. At the same time, the state still has not fully restored all the dollars it cut from schools during the recession.

And then there’s what Democrats describe as about $325 million in tax cuts for the coming year -- $386 million with other fee cuts -- a figure that Sen. Andrea Dalessandro, D-Green Valley, said will increase to $531 million within three years.

Sen. Vince Leach, R-Tucson, said all that change does is offset the additional dollars Arizona is expected to collect from its taxpayers due to changes in federal tax laws. It also accounts for the fact that the state, taking advantage of a ruling last year by the U.S. Supreme Court, will be imposing its sales tax on online sales, picking another $85 million from the pockets of Arizona shoppers who click and buy rather than going to local brick-and-mortar stores.

Democrats contend the state should have kept at least some of that extra money. Dalessandro said 90 percent of her constituents told her they would rather invest in public education than getting a larger standard deduction on their state income taxes.

“It belongs to the people,’’ Allen continued. “They paid for it with their blood, sweat and tears.’’

And Democrats are unhappy that the plan calls for putting another $570 million into the state’s rainy day fund over the next two years, bringing it to $1 billion. That, they said, is money that should be used for priorities.

Fann, for her part, recited a litany of things that are funded.

For example, she did not dispute that the community colleges in the state’s two largest counties are not getting the same state aid, divided up by students, as the rural colleges.

Leach said they were not forgotten, saying Pima Community College will get $15 million during the coming three years to expand its aviation training center “for an industry that’s absolutely dying for people to hire.’’ And there’s $5.8 million for a health care program at the Maricopa colleges.

And he said there’s $14.2 million to be divided up among rural community colleges.

Elsewhere in the spending plan, Fann pointed out that it adds $20 million to a program to help schools hire counselors or school resource officer. That’s on top of $12 million already in the budget.

There also is $88 million for schools to use for repairs and maintenance, $76 million for new school construction and $10 million in grants for students in career and technical education.

There also is some additional cash for the universities: $18.9 million for Arizona State University, $9.4 million for the University of Arizona and $6.7 million for Northern Arizona University. But those are one-time funds, meaning the schools cannot start or expand existing programs with the dollars.

But Quezada complained that lost in all that are some smaller programs that are taking a hit in the spending plan.

He was specifically critical of taking $700,000 taken from an account which is supposed to help provide attorneys for poor people who are accused of criminal charges. Quezada said that’s not fair.

Not all the opposition came from Democrats.

Sen. J.D. Mesnard, R-Phoenix, refused to go along with the budget, not because of how the money was being spent but how that tax relief package was structured.

Mesnard said the tax breaks were designed to compensate for the higher taxes due to those changes in federal tax law. But he said that the plan, including changes in tax brackets and doubling the standard deduction, still left some Arizona residents paying more, creating “winners and losers.’’

“And we’re not just talking about the super rich,’’ Mesnard said.