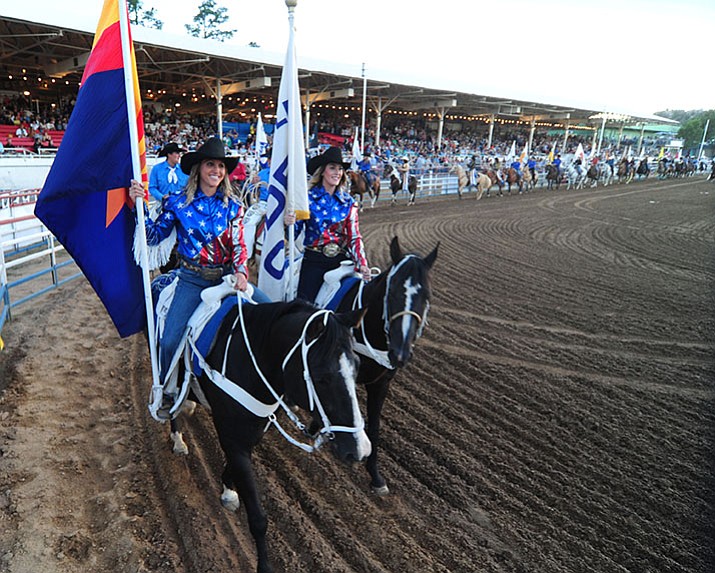 The grand entry makes its way around the arena during the opening performance of the Prescott Frontier Days Rodeo this year at the Prescott Rodeo Grounds. It’s one of the region’s top tourism draws. (Les Stukenberg/Courier)

The City of Prescott’s contribution to the World’s Oldest Rodeo is poised to go up to $30,000 this year if the Prescott City Council approves a $10,000 increase this week.

The rodeo contribution is one of about a half-dozen items on the 3 p.m. session’s consent agenda – a list of mostly routine items that typically are not discussed separately unless a council member requests it.

Rodeo officials recently reported to the council that attendance at the event, which takes place over the week of July 4, has been increasing steadily.

In addition, Heiney said an informal survey of local hotel owners indicated that the rodeo is one of the top events generating hotel stays.

“We feel it’s a worthwhile investment,” Heiney said of the increased contribution.

A city memo on the matter states: “This is a treasured event, and a pillar of Prescott’s tourism attraction efforts.”

The money for the contribution comes from the city’s bed tax fund (generated from a tax on customers at hotels, motels, and other short-term rentals), and Heiney said funds are available to cover the increase.

“We’ve been fortunate that the bed tax has been growing,” Heiney said.

Other action taking place on Tuesday include:

During its 1 p.m. study session, the council will hear a report from water expert Gary Woodard about a city water model.

The presentation is expected to build upon the water information that Woodard presented to the council in February under a $25,000 contract with the city.

Heiney said this week’s presentation would be the second of three expected presentations by Woodard on his analysis of the city’s water portfolio. His final report is still to come.

As a part of its consent agenda at 3 p.m., the council will consider an intergovernmental agreement with the Arizona Department of Transportation (ADOT) to receive $315,000 from ADOT through a “HURF (Highway User Revenue Fund) exchange.”

The money would help cover the city’s $1.2 million cost of an upcoming pavement rehabilitation project on Highway 89 between Willow Lake Road and Phippen Trail.

At its May 14 meeting, the council approved a $1.2 million contract with Sunland Asphalt & Construction Inc. for the pavement rehabilitation work.

This week, a consent-agenda item at 3 p.m. proposes the agreement with ADOT to receive $315,000 toward the total cost.

A city memo explains that a series of 2011 agreements between the city, ADOT, and Yavapai County had turned over maintenance for the section of state highway from ADOT – first to Yavapai County for five years, and then to the city.

That agreement had required that certain maintenance work be done before the city took on the responsibility. A city memo states: “Subsequently, no pavement preservation work was provided by ADOT … before all maintenance responsibility was transferred to the city.”

The pavement is now “deteriorated beyond preservation methods,” the memo added, and the city is proceeding with the pavement rehabilitation starting on June 1.

ADOT’s contribution “is equal to an amount that they would have spent to provide a pavement surface treatment per the 2011 agreement,” the city memo adds.

The Highway 89 construction is set to begin June 1 and be complete by June 19. It will include night work.