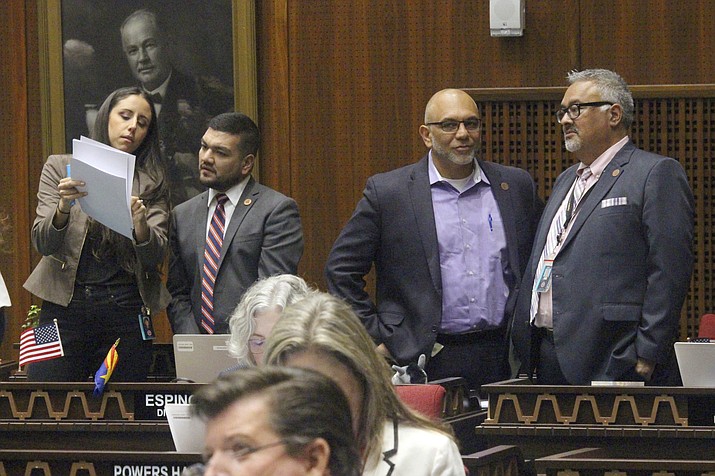 PHOENIX — House Republicans rejected a bid to put another $178,000 into an $11.8 billion state budget even though one of them conceded it probably would save the state far more than that in the long run.

The proposal by Rep. Kelli Butler, D-Paradise Valley, sought to provide funding for dental care for pregnant women who are on the state’s Medicaid program.

“Every single person in this room knows that any infection and disease during pregnancy can be dangerous to a developing baby,” she told colleagues. And Butler said there is a “clear relationship” between periodontal disease and pre-term and low-weight babies.

Financially speaking, Butler said, delivery and first-year health care costs of a healthy baby in the state’s Medicaid program costs the state $5,000, versus $55,000 for a pre-term baby.

Rep. Regina Cobb, R-Kingman, who is a dentist, confirmed for colleagues that link between dental disease and pregnancy complications.

But Cobb, who chairs the House Appropriations Committee, said adding that money to the budget is not that simple. She said the funding for this program was not included in the package because the ask came tied to other funding requests that were not considered as important.

“And now we are stuck with the budget that we have right now,” she said. “There will be another day for this.”

That excuse drew a sharp reaction from Rep. Charlene Fernandez, D-Yuma, particularly with Republican lawmakers just the other day voting to add $2.5 million to the budget to give to anti-abortion organizations to provide direct and referral services to pregnant women.

“We talk a lot about being pro life, about being a pro-life state, that we care about children,” she said. “Well, at some point you have to put your money where your mouth is.”

The rejection of the new funding came as the House approved cutting about $325 million in state income taxes.

Rep. Andres Cano, D-Tucson, called the move irresponsible what with the financial needs of the state.

“The public is outraged at the sad state of our public schools,” he said.

But Rep. Ben Toma, R-Peoria, said this is not a tax cut. He said it is simply offsetting the additional revenues Arizona expects to collect from residents both through changes in federal tax law and a decision to begin taxing online sales.

“Not doing this is a $300-plus million tax increase on the taxpayers of Arizona,” he said.

Rep. Randall Friese, D-Tucson, said that presumes that the state will, in fact, collect that extra $325 million. And he pointed out that the state was making a permanent cut in its income taxes even though the changes in federal tax law — the ones that resulted in a windfall of new state revenues — self-destruct after 2025.

Lawmakers were working late into Friday night in an effort to put the finishing touches on the spending plan — and to finally wrap up a legislative session that already has gone a month beyond its deadline.

Key elements of the plan are in place, including money for the next step in the promised 20 percent raise for teachers promised last year by Gov. Doug Ducey and lawmakers. There also are additional dollars for some career and technical education programs. And schools will no longer have to wait until they already are overcrowded to seek state funds for new buildings.

Dispute remains, however, over what some say is the failure to put more dollars into programs designed to train doctors and place them in underserved rural areas.

On the revenue side of the equation, Democrats have so far been unable to undermine plans by Republicans to cut income taxes by about $325 million. That is money that proponents of the plan say simply acknowledges the additional dollars being generated from Arizonans from changes in federal tax law as well as the fact Arizona now plans to impose its sales tax on online sales.

But Sen. J.D. Mesnard, R-Chandler, is leading an effort to revamp how those tax cuts are structured.

He contends that they favor those near the bottom of the income scale. But the flip side of that, Mesnard said, is that many Arizonans who are being hit hard by the changes in federal tax law are not going to be made whole by the proposed changes in the state tax code.

Mesnard said he and his allies are prepared to withhold their vote for the plan until the tax package is reconfigured.

“One day at a time, one step forward,’’ she said. And that, said Fann, means corralling the votes among lawmakers who want one thing or the other in the spending plan.

“This is always a tough time every year that we do budgets,’’ she said. “It’s a lot of stress, the end of the session.’’

Even after Republicans settle issues among themselves Democrats are expected to make a last-ditch effort to add additional spending priorities into the package. That includes immediate restoration of the state aid to schools that was cut during the recession, increasing dollars for subsidized child care for the working poor, and adding more cash to programs to help the homeless.