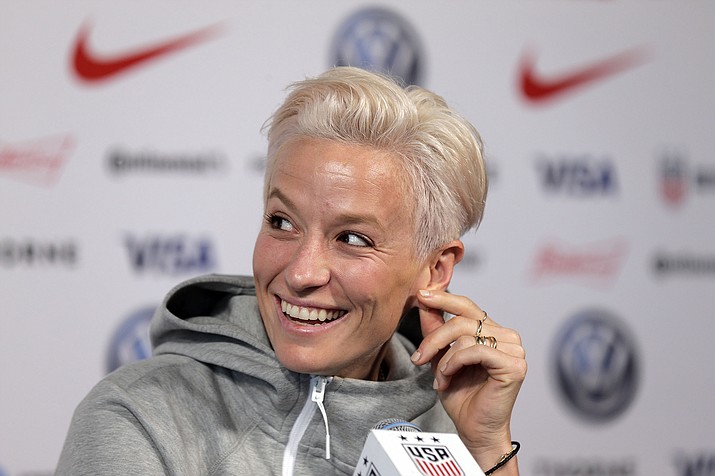 Megan Rapinoe, a member of the United States women’s national soccer team, speaks to reporters during a news conference in New York, Friday, May 24, 2019. (Seth Wenig/AP)

“They have essentially unlimited resources. I don’t think that it’s really been a huge change at all,” the 33-year-old Californian said Friday, two days ahead of the Americans’ send-off match against Mexico. “Sort of the incremental change that we’ve seen is just not enough.”

A champion at the 2012 London Olympics and the 2015 World Cup, the Seattle Reign midfielder has been the most outspoken American player.

FIFA doubled prize money for the women to $30 million this year from the amount four years ago and the amount for the winning team to $4 million. That remains a fraction of the money at last year’s men’s World Cup, where France received $38 million from a $400 million pool. FIFA has raised the men’s pool to $440 million for 2022.

“I would like to see a major paradigm shift and sort of a major overhaul,” Rapinoe said. “There’s been such a lack of investment for all of these years and such a lack of care and attention that doubling or tripling or quadrupling investment, care, attention to the women’s game I think would be appropriate.”

FIFA pointed to the increase in resources devoted to women since Gianni Infantino became FIFA’s president in 2016, including the hiring of Fatma Samoura as secretary general , the first woman to hold the post; the addition of Sarai Bareman as FIFA’s first chief women’s football officer and the establishment of a FIFA’s women’s division; and using video assistant referees at the Women’s World Cup following the introduction of VAR at last year’s men’s World Cup. FIFA said its staff at the World Cup will include 214 women and 218 men.

Rapinoe also criticized FIFA for allowing three major finals to take place on the same day, splitting focus that could otherwise be solely on the women. The women’s final in Lyon, France, will kick off at 11 a.m. EDT and be followed by the Copa America championship match in Rio de Janeiro at 1 p.m. MDT and the CONCACAF Gold Cup final in Chicago at 6 p.m. .

“It’s ridiculous and disappointing, to be honest,” Rapinoe said.

FIFA said playing the three finals on the same day would boost attention for all.

“The scheduling of the different events has gone through a comprehensive consultancy process, which has involved all key stakeholders and taken into account different aspects of the women’s and men’s international match calendars,” it said in a statement. “It is a rare and exciting occurrence.”

Players on the U.S. team sued the U.S. Soccer Federation in March, charging institutionalized gender discrimination. The USSF countered that pay and benefits for members of the men’s and women’s teams, bargained by separate unions, can’t be compared and said there was no basis for allegations of illegal conduct.

“It’s not this divide. It’s very much a cohesive unit,” U.S. coach Jill Ellis said. “It doesn’t enter the locker room. It doesn’t enter the meeting space. We’re working together and making this work and, yeah, I understand. I’m a woman. I have a young daughter. I understand a lot of the bigger social issues out there in terms of that. But I also know right now the job is to get the team focused and they are focused.”

Preparing for her third World Cup, Rapinoe is among three American co-captains, joined by two-time FIFA player of the year Carli Lloyd and Alex Morgan. With short, spikey dyed blond hair, Rapinoe is the most recognizable U.S. women’s player.

Before the 2012 Olympics, she came out as gay . She knelt during the national anthem three years ago in support of NFL quarterback Colin Kaepernick and this year became the first openly gay woman to appear in Sports Illustrated swimsuit issue .

Rapinoe is not surprised at attacks on LGBTQ rights and abortion rights.

“Equality for all requires people who have more of it right now to give up some which I think, obviously, is a good thing for everyone,” she said. “But some people don’t want to give that up, so they’re doing everything they can to keep all of it to themselves. I don’t think it’s surprising. I think those people are probably going to do everything they can to keep all the power that they have for as long as they possibly can.”

She maintains inequality for women in sports goes beyond soccer.

“I think it’s pretty clear women in sport have not been treated with the same care and financing and all of that that men’s sports has,” she said. “So I don’t think anyone’s really arguing about that anymore.”