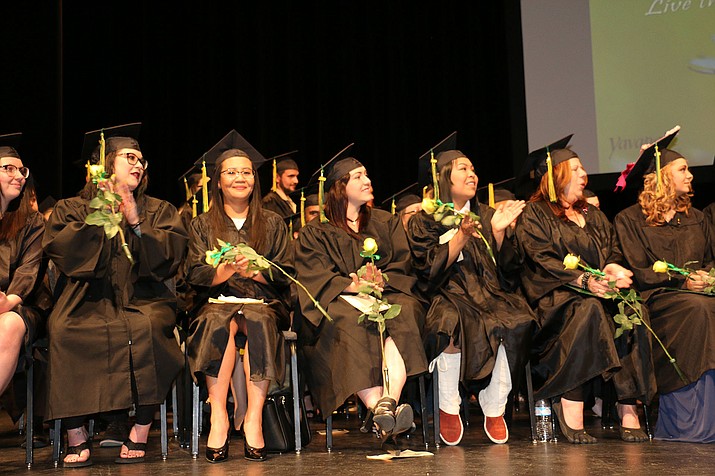 Bullying, young motherhood, substance abuse and shattering molds were among the reasons the latest group of GED earners gave for rerouting their educational journeys. Courage and hard work got them to the graduation stage May 18 at Yavapai College.

“There were many times that I wanted to give up, convincing myself that if I failed my tests then it wasn’t meant to be,” 46-year-old Jennifer Trisdale said in an address to fellow GED earners and audience members gathered in the YC Performing Arts Center. “Well, I failed many, many times. Each time I became a little wiser, a little stronger and a little more brave.”

The Dewey resident was one of 180 Yavapai County residents who obtained their GEDs, many with assistance from Yavapai College’s Adult Basic Education program. Approximately 40 GED earners participated in the award ceremony.

Trisdale said having her teenage daughter tell her “You can” inspired her to “show up” and get her GED.

Yavapai College President Dr. Lisa Rhine told the graduates to take pride in achieving a personal milestone that required courage and commitment and “one that proves all things are possible.”

Rhine encouraged the GED earners to continue investing in their educations.

For more information about Adult Basic Education at Yavapai College, or English as a Second Language, visit www.yc.edu/ABE.