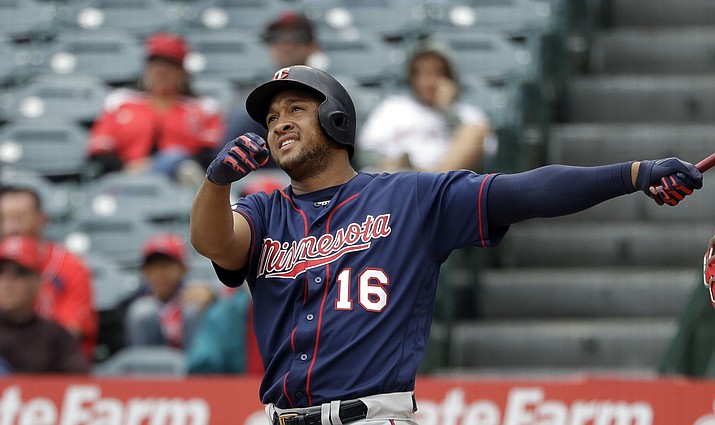 Minnesota Twins’ Jonathan Schoop follows the path of his three-run home run against the Los Angeles Angels during the second inning of a baseball game Thursday, May 23, 2019, in Anaheim, Calif. (Marcio Jose Sanchez/AP)

It was the third time in franchise history — dating to their days as the Washington Senators — and second time this season the Twins homered eight times. Before doing it April 20 against Baltimore, the last time it happened was in 1963 against Washington.

Schoop drove in four runs and Sano three as the Twins won six of seven on their trip that began in Seattle and wound up with their first sweep in Anaheim since 1996.

There were a total of 11 home runs in this game, which was originally set for Wednesday but postponed due to unplayable field conditions following a pregame storm.

The eight home runs also tied the Angels mark for most allowed. It previously happened in 2005 against Texas and 1996 vs. Oakland. Tommy La Stella hit his first grand slam in the ninth for the Angels, who have dropped four straight. David Fletcher and Brian Goodwin also homered for Los Angeles.

BALTIMORE (AP) — Mychal Givens walked Aaron Hicks with the bases loaded to force in the tiebreaking run in the ninth inning, and New York completed a four-game sweep of Baltimore.

Clint Frazier and Luke Voit homered for the Yankees, who went deep 13 times in the series.

Down 4-1 in the eighth, the Orioles mounted a comeback. Two walks and an RBI single by Trey Mancini brought in Tommy Kahnle (2-0) from the bullpen, and Renato Nunez tied it with a three-run drive.

In the ninth, Gleyber Torres drew a walk and Gary Sanchez singled before Givens (0-2) walked DJ LeMahieu to load the bases. After going 3-0 on Hicks, Givens got two strikes before missing badly outside.

Zack Britton worked the ninth for his second save.

Baltimore has lost six straight. The Orioles own the worst record in the majors (15-35) and worst record at home (6-19).

CLEVELAND (AP) — Ryan Yarbrough handled Cleveland’s lineup into eighth inning in his first start this season and Kevin Kiermaier legged out a three-run, inside-the-park homer when two outfielders collided in the win for Tampa Bay.

The Indians dropped their fourth straight and nearly lost two more players to injury on a freakish play in the sixth when rookie left fielder Oscar Mercado and center fielder Leonys Martin slammed into each other trying to catch the ball.

Mercado took the worst of the crash as Martin’s left knee drove hard into his right hip. As the two Indians players lay helplessly in the grass, the ball ricocheted toward the left-field corner and Kiermaier easily circled the bases for the first inside-the-parker allowed by Cleveland since 2008.

Gómez’s first homer of the season came off Wander Suero (1-4) as the Mets completed a four-game sweep.

The Nationals came to life after Martinez’s ejection in the eighth. Juan Soto walked against Robert Gsellman (1-0), Victor Robles singled, and Yan Gomes brought in Soto with a double. Gerardo Parra followed with a pinch-hit, two-run single for a 4-3 Washington lead.

The Nationals have lost five straight and six of seven.

The Pirates jumped on Rockies starter Antonio Senzatela (3-4) for eight runs over 3 1/3 innings, but Colorado stormed back in the sixth, plating six runs that were charged to Pittsburgh starter Jordan Lyles (5-1).

Pittsburgh quickly fought back with three homers. Gregory Polanco homered in the first for Pittsburgh.

The Pirates had scored just two runs while dropping their first two games of the series before setting a new season high with 14 on Thursday.

DETROIT (AP) — Garrett Cooper hit a grand slam with two outs in the ninth inning and Miami extended its winning streak to six gameS with the win over Detroit.

The Marlins, who had the worst record in the majors last week, extended the longest active winning streak in the big leagues.

The Tigers wrapped up an 0-9 stay at Comerica Park against Houston, Oakland and the Marlins. That record doesn’t include a suspended game in which Detroit trails Oakland in the late innings.

Miami benefited from a couple of fielding lapses by the Tigers in the ninth to come back against Shane Greene (0-2), who had been 15 for 15 on save chances this season.

Tyler Kinley (1-0) gave up one run in the eighth and got the win. Sergio Romo earned his ninth save with a perfect ninth.

CHICAGO (AP) — Jean Segura and J.T. Realmuto homered off Jon Lester, and Philadelphia beat Chicago for a split of the four-game series between division leaders.

Anthony Rizzo and Kyle Schwarber hit homers for Chicago, which had won three of four. Rizzo finished with four hits and three RBIs, but the NL Central-leading Cubs were unable to overcome a second consecutive shaky performance by Lester (3-3).

Lester was charged with four earned runs and seven hits in his second straight loss. He had an 8-0 record and a 1.49 ERA in 10 career starts against the Phillies before Thursday.

Segura also doubled in the third to extend his hitting streak to 14 games.

SAN FRANCISCO (AP) — Austin Riley hit a game-tying home run in the eighth inning and then drove in the go-ahead run in the 13th with a two-out single off Reyes Moronta, lifting Atlanta past San Francisco.

Riley and Ozzie Albies each had three hits for Atlanta and Tyler Flowers homered. The Braves have won 10 of 13.

Luke Jackson (3-1), who blew his fourth save on Tuesday, retired six batters to win.

Riley already had one hit before his two-run homer off Tony Watson with two outs in the eighth. It was the 22-year-old’s third home run of the series and fifth overall.

Pearce went 3 for 5. He singled in the fourth and sixth innings and hit a two-run shot off Ryan Feierabend in the ninth, his first of the season.

Rafael Devers had two hits, two RBIs and scored twice as Boston improved to 11-3 in its past 14 road games.

The struggling Blue Jays lost for the third time in four games.

Weber (1-0) allowed one run on three hits, walked none and struck out four.

Toronto’s Sam Gaviglio (3-1) allowed four hits, two earned runs and struck out one in the loss. Justin Smoak hit a solo homer in the ninth.