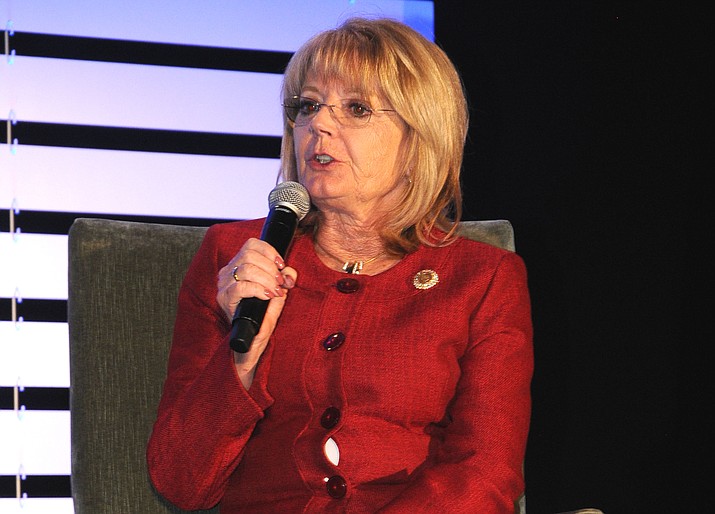 Senate President Karen Fann, R-Prescott, seen here in a Jan. 31, 2019, photo, sent members of her chamber home Thursday, May 23, 2019, after there was no deal on the table to vote on a $11.8 billon state budget. (Howard Fischer/Capitol Media Services, file)

PHOENIX — Efforts to finally approve an $11.8 billion spending plan stalled Thursday as House and Senate leaders struggled to line up the votes.

Senate President Karen Fann sent members of her chamber home until Friday after informing them that there was no deal on the table for a vote and she could not corral the necessary 16 Republican votes. Fann also suggested that one is not close, saying there could be an unusual Saturday session.

And if that doesn't produce a deal, Fann said there could be a session on Memorial Day.

Across the courtyard, the House was able to marshal the votes only for one piece of the budget: Setting aside $2.5 million to be awarded to an organization that would provide referral services for pregnant women and new mothers. But that came over the objection of Democrats who pointed out the cash would be reserved only for groups that would counsel women against having an abortion.

The preliminary approval came after the Republican-controlled chamber rejected a proposal by Sen. Mitzi Epstein, D-Tempe, to instead give the cash to an existing volunteer groups that staffs the state's 2-1-1 referral service. She said that would enable the organization to operate on a 24/7 basis statewide -- and would provide a broader menu of services.

That suggestion was panned by Rep. Michelle Udall, R-Mesa, who is pushing for the funding aimed at convincing women not to terminate their pregnancies. She said there is evidence that more women would choose to keep their babies if they could get help.

"We should offer cheap or free contraception, the "morning after'' pill and medically accurate sex education in the schools,'' she told colleagues.

And Rep. Raquel Teran, D-Phoenix, said the legislation is crafted in a way to give the money to "crisis pregnancy centers'' which are often run by churches and faith-based groups that have as their mission to deter women from terminating a pregnancy. She said the record from other states shows these organizations which uses "deceptive and manipulative practices.''

House Speaker Rusty Bowers, R-Mesa, did agree to scale back the program, providing the dollars for just one year instead of three. He also wants a report at the end of the year about what services actually were offered for the state dollars.

On the overall budget several key issues remain to be resolved.

Sen. J.D. Mesnard, R-Phoenix, said the tax cut package -- offsets to higher taxes due to changes in federal tax law -- is not properly balanced. He said the plan, which focuses much of the savings on those near the bottom of the income scale, could still leave some Arizonans with higher tax bills than now.

Sen. Heather Carter, R-Cave Creek, wants additional dollars for some programs including providing more doctors for rural areas. Carter and Sen. Paul Boyer, R-Phoenix, also are holding out their votes for the budget until the Legislature votes on a plan they find acceptable to provide victims of child sex abuse more time to sue their assailants.