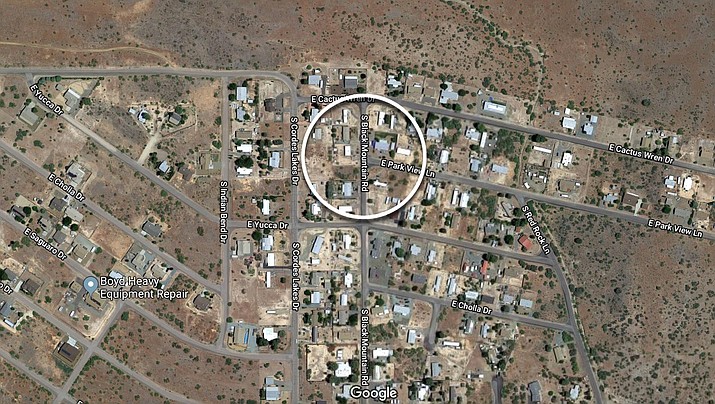 Yavapai County Sheriff’s deputies arrived on scene at about 9:45 a.m. Sunday, May 19, 2019, and provided initial first aid to two women reportedly attacked by three pit bulls. One woman was lying on her side screaming while bleeding from bites on her arms and head, YCSO reported. The other was sitting up nearby bleeding from bites on her arms and legs. (Google map, 5000 block of S. Black Mountain Road in Cordes Lakes, Arizona)

Two Cordes Lakes women have their neighbors to thank for coming to their aid during a vicious dog attack Sunday morning, May 19.

One of the women told Yavapai County Sheriff’s Office (YCSO) deputies that as they got to her home in the 15000 block of S. Black Mountain Road, there were three pit bulls in her yard. When she tried approaching the dogs, they attacked her and her friend, so she began screaming for help.

Neighboring children heard the scream and let their mother know, according to the mother’s witness account. The mother quickly grabbed her handgun and went to see what was happening. She found the three dogs surrounding the two victims, trying to drag one of them under the house.

Afraid to shoot directly at the dogs, the armed neighbor fired a couple of rounds nearby as the dogs kept attacking, according to her account. Meanwhile, her friend called 911 as her husband arrived on scene. He took the handgun from his wife and ran up to where the attack was taking place. He was able to shoot one of the dogs immediately, and eventually another dog. He attempted to shoot the third dog but was unsure if he was successful. Two of the dogs ran off while the third remained where it was shot.

Animal control officers with YCSO arrived soon after and were able to capture the two runaway dogs with the owner’s assistance, YCSO reported. The third dog was confirmed dead at the scene. All three dogs belonged to an adjoining neighbor on S. Black Mountain Road, and apparently jumped a fence before attacking the women, YCSO reported.

Mayer Fire Department personnel treated the two women, ages 57 and 61, for multiple puncture and laceration wounds before they were transported to a Phoenix area hospital. Their injuries are not considered life-threatening, YCSO reported.

The owner of the dogs was cited for six counts of aggressive animal-attack and injure (a class 1 misdemeanor) and three counts of dog at large (also a misdemeanor). The two surviving dogs both suffered gunshot wounds and were bleeding badly, YCSO reported. As a result, the owner signed an animal surrender form and both dogs were euthanized. Rabies testing is pending on all three dogs.

Editor's Note - As a matter of policy, Prescott News Network does not list names of individuals charged with misdemeanors, except in cases involving a public figure for example.