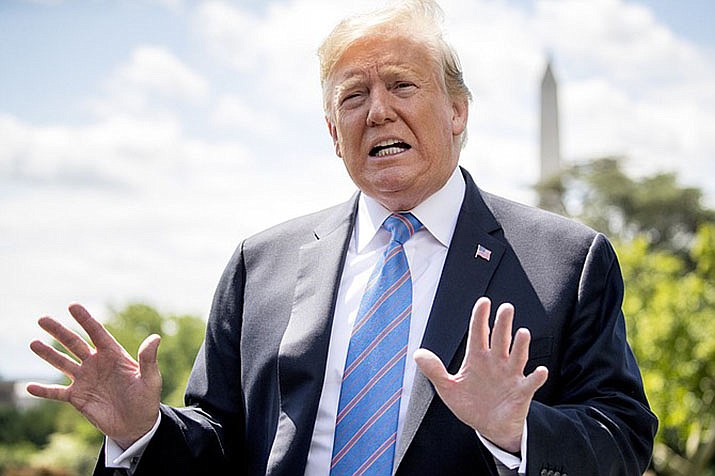 WASHINGTON — Bogged down in a sprawling trade dispute with U.S. rival China, President Donald Trump took steps Friday to ease tensions with America’s allies — lifting import taxes on Canadian and Mexican steel and aluminum and delaying auto tariffs that would have hurt Japan and Europe.

By removing the metals tariffs on Canada and Mexico, Trump cleared a key roadblock to a North American trade pact his team negotiated last year. As part of Friday’s arrangement, the Canadians and Mexicans agreed to scrap retaliatory tariffs they had imposed on U.S. goods.

“I’m pleased to announce that we’ve just reached an agreement with Canada and Mexico, and we’ll be selling our product into those countries without the imposition of tariffs, or major tariffs,” Trump said in a speech to the National Association of Realtors.

In a joint statement, the U.S. and Canada said they would work to prevent cheap imports of steel and aluminum from entering North America.

The provision appeared to target China, which has long been accused of flooding world markets with subsidized metal, driving down world prices and hurting U.S. producers. The countries could also reimpose the tariffs if they faced a “surge” in steel or aluminum imports.

In Washington, some were urging Trump to take advantage of the truce with U.S. allies to get even tougher with China.

“China is our adversary,” said Sen. Ben Sasse, R-Neb. “Canada and Mexico are our friends. The president is right to increase pressure on China for their espionage, their theft of intellectual property, and their hostility toward the rule of law.

“The president is also right to be deescalating tension with our North American allies.”

Earlier Friday, the White House said Trump is delaying for six months any decision to slap tariffs on foreign cars, a move that would have hit Japan and the Europe especially hard.

Trump still is hoping to use the threat of auto tariffs to pressure Japan and the European Union into making concessions in ongoing trade talks. “If agreements are not reached within 180 days, the president will determine whether and what further action needs to be taken,” White House press secretary Sarah Sanders said in a statement.

In imposing the metals tariffs and threatening the ones on autos, the president was relying on a rarely used weapon in the U.S. trade war arsenal — Section 232 of the Trade Expansion Act of 1962 — which lets the president impose tariffs on imports if the Commerce Department deems them a threat to national security.

But the steel and aluminum tariffs were also designed to coerce Canada and Mexico into agreeing to a rewrite of North American free trade pact. In fact, the Canadians and Mexicans did go along last year with a revamped regional trade deal that was to Trump’s liking. But the administration had refused to lift the taxes on their metals coming into the United States until Friday.

The new trade deal — the U.S.-Mexico-Canada Agreement — needs approval from legislatures in the U.S., Canada and Mexico. Several key U.S. lawmakers were threatening to reject the pact unless the tariffs were removed. And Canada had suggested it wouldn’t ratify any deal with tariffs still in place.

Thomas Donohue, president of the U.S. Chamber of Commerce, said the lifting of the tariffs “will bring immediate relief to American farmers and manufacturers. Critically, this action delivers a welcome burst of momentum for the USMCA in Congress.”