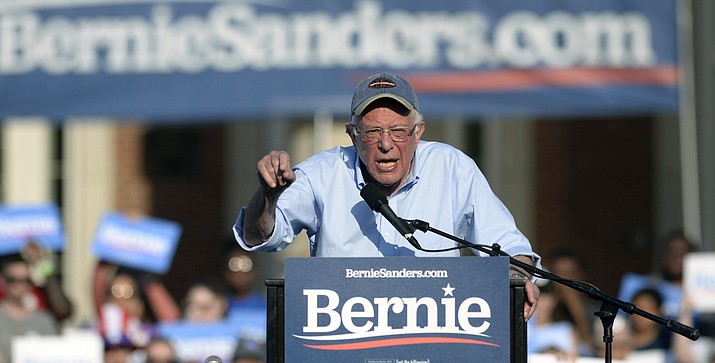 Sen. Bernie Sanders, I-Vt., speaks to the crowd during a rally at Central Piedmont Community College on the lawn of Overcash Center in Charlotte, N.C. on Friday, May 17, 2019. (David T. Foster III/The Charlotte Observer via AP)

COLUMBIA, S.C. (AP) — Democratic presidential hopeful Bernie Sanders wants to suspend taxpayer funding of new charter schools and ban those that are for-profit as part of his plan to overhaul public education that he released on Saturday.

Saying charter schools are “exacerbating educational segregation,” Sanders proposes more transparency and accountability for them, as well as limits on the pay of their chief executives. According to the campaign, the 10-point plan focuses on “reversing racial and economic segregation that is plaguing elementary and secondary schools.”

The current education secretary, Betsy DeVos, is an advocate for charter schools, which receive public funding but operate independently.

Sanders unveiled the plan Saturday ahead of a speech in South Carolina. The campaign said the release of Sanders’ Thurgood Marshall Plan for Public Education was timed to the 65th anniversary of the Brown v. Board of Education ruling that racial segregation in public schools was unconstitutional.

As head of the NAACP Legal Defense and Educational Fund, Marshall served as chief attorney for the plaintiffs, more than a decade before becoming a U.S. Supreme Court justice.

To combat disparities in education funding, the senator from Vermont is proposing “large new investments in programs that serve high-poverty communities, support special needs students, and augment local efforts to integrate school districts.” That also includes a minimum on per-pupil spending in all school districts across the country, as well as a universal school meal plan and a goal of closing “the gap in school infrastructure funding to renovate, modernize, and green the nation’s schools.”